How Do You Think It Went Down? 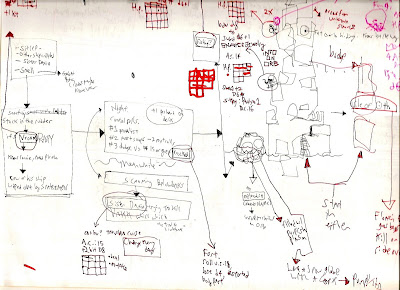 This is the game we played on Gygax's deathday...

Sticking out from the water.

Flooded city. Or what's left of it.

Snake people (librarians) up there at the top, in the middle of raiding it. Food and gold hoarded at the top of the tower.

Near the tower, less well-defended, a shorter tower, rope bridge stretches across to the middle of the big tower.

Hidden in lower echelons of the tower--defenders, allies of these snake men. Including: stinging jellyfishmen, a few well-hidden archers, and someone launching toothed, carnivorous, floating gas-spore-like creatures at the intruders.

At the base of the tower: floating, a bobbing sphere, the size of a house, made of shaped coral with windows of crystal.

PCs enter on a ship--Kimberly Kane as Miss Mold Pig the Barbarian, Mandy Morbid as Zsa Zsa the Yuan-Ti Cleric, Cameraman Darren as The Fighty Dwarf, and Bobbi Starr as Lola, likewise a fighty Dwarf.

The dwarves are sailors.

NPCs tied up belowdecks: a pirate named Rakk they found stuck in their rudder (veteran of the struggle the snake men are now mopping up), a cleric named Sister Daxia who was helping the party but who got herself disarmed, hogtied, and gagged on account of her recognizing Rakk after they picked him up since he stole some kind of artifact from the church (ages ago) and so she tried to kill him.

How we left it at the end:

Kimberly and Darren clinging desperately to the head of a jellyfishman in the water while Mandy swims toward them. Everyone being shot at with arrows.

So, readers, how did the session go down?

Hm. An attempt to sway the jelly people to rise up against their allies. The yuan-ti PC impersonating a librarian, with the other PCs as slaves a la Han, Luke & Chewie. Amphibious assault via water breathing potions/spells.

It obviously went down AWESOME.

Sounds bizarre and awesome but I'm confused. Doesn't the post tell us how it went down? You even told us how it ends.

I'd say it went well.

We have a Lola the Fighty Dwarf too.

He used to be Lola the Fighty And Gender-Appropriate Half-Orc, before the Reincarnate spell was needed.