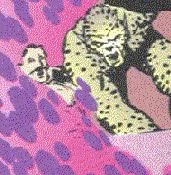 Girls run into next room, see treasure, still scared, run to next room.

Snow Leopard man (inside circle) sees Girl B (outside circle) and falls in love with her.

Girl B throws dagger at Snow Leopard Man, hits, but rolls a 1 for damage.

DM invokes modified Jeff's Consolation-Prize Damage Mechanic declaring that rolling a 1 for damage means PC can choose any non-just-more-damage effect that that weapon could reasonably inflict, Girl B decides this is that her dagger cut off a few inches of the Snow Leopard Man's beasthood in an attempt to make Snow Leopard Man less desirable to Girl A so they can get the fuck out of here.

Girl A goes scrambling around looking for the severed tip, Girl B finds secret door and tells castrated, enamored Snow Leopard man to follow her and protect her.

Girl A lugs Girl B through frozen doomforest until they come upon a passing traveller with a coach...

So, then...
Doctor Mechanic:

The way I run things, when you get down to 0 hp you start losing hp and when you get to negative (your constitution) you die.

I do not really like the idea that there's a cleric in every town. Like, cleric spells are little miracles, the idea that clerics with healing to spare can be found all over the countryside wherever you happen to stumble out of a dungeon doesn't quite sit right. So here's an easy mechanic for regular medieval physicians--who, I attest, can be found everywhere.

Doctors can heal people at a rate of 1 hp per day. The main advantage, though, is they keep people from getting worse. Successful doctor treatment prevents hit point degradation from ordinary weapon wounds for 8 hours (the length of time it takes for the party's cleric to rest and get his/her spells back). However: medieval medicine is filthy and repulsive. Before the treatment can work, the PC being treated must roll under his or her constitution. If s/he fails, s/he loses d6 hp immediately. If s/he succeeds, all's good and s/he's in stable condition.

GM's wishing to add granularity to the system can rock this...

I must resist the urge to introduce a doctor called "Mechanic" into my next game.

Making the doctor a function of the character-- that is, via a Con check-- is clever. Jeff's minimum damage rule is great, great stuff; up there with the lucky number kung-fu.

How much do people heal if they just get bedrest (and chicken soup, of course)?
Is the Doctor's 1hp/day a bonus onto that?
Also if the check fails, is the PC still stabilized, just more bloody than before, or do they still need further...doctorin'?

if the check fails, they are still stabilized--if they survived

To the Abyss with your doctors! I wanna know about the Snow Leopard Men and their Frost Witch Queen!

then you have to convince Mandy and her sister to go back into the dungeon. you know where to find them.

Like the doc rules. I already use non-magical healing/recovery IMG (bed rest = 1hp/day, rising to 1d3/day w. medical care. Can't remember who I nicked it from.) The chance to cure minor poisonings and infections without resorting to cleric, cleric, cleric seems flavourful.

Hey, that was exactly my last CoC character.

I wonder what a class writeup for a medieval doctor would look like...