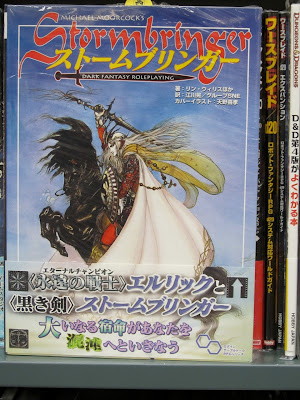 Sorry. So many apologies to make, let's start at the beginning:

Apology 1-This guy's not actually an elf. His name is Elric and he is a Melnibonean. But, for local purposes, he's basically an elf. The people who usually read this blog are not the kind of people who are going to lynch you for calling that guy "basically an elf", though they might gently remind you that there's an accent I do not know how to get my computer to type over the "i" in "Melnibonean" (no, wait, I've just been informed it's the "e"). They are also--mostly--the kind of people who know how to get my computer to do that accent and will leave a comment about it in the comments.

Apology 2-Dear Hot Elf Googler: Why have you been brought here? To this blog? It's all a stunt and our motives are suspicious. Who are we? We are DIY D&D. That is, we are people who are interested in playing Dungeons and Dragons, and games like it, in ways adapted to make it interesting to play for adults who do not live in their parents' basements. And sometimes to make it interesting to play for adults to play with their children.* And, in my own particular case, for adult film performers to play with other adult film performers.** That is, we are grown-ups who enjoy the game enough to fuck with it, the way Hell's Angels like Harleys so much that they fuck with them.

Such community as exists between us is centered around these blogs. And also some forums. To hear more about the blogs, check out that column down the right, and to preview more of them, look here. To hear about forums, check over here.

Apology 4-There is no actual useful game material in this post, or analysis of any game product and why it rocks or fails to, or funny pictures of monsters with lots of heads. It's just an invitation. However if you want some of that you could click over where it says "greatest hits" down there and see some stuff. If you just want pictures of naked people, click the "players" label, there might be a few scattered around. But: warning, they're all girls

Apology 5-I was scooped on this whole gender switch thing.

Apology 6--I took the image above, by Yoshitako Amano, from Grognardia which is this blog that everyone in DIY D&D reads. Even the people who hate it and rag on it read it for some reason. So if you wanted to start reading about D&D somewhere, you could start there. Some people think James from Grognardia is uptight but I can't remember the last time any of them dug out and posted an awesome post-anime neo-art-nouveau picture of an androgynous albino drug addict riding one of the most hardcore horses in the long history of equine illustration, so whatever to those guys.

Apology 7-As you can tell, Elric up there is big in Japan. Since--if you're reading this--there's about a 50% chance that you love nearly everything you've ever seen out of the Land of the Rising Sun, and they just had a tsunami over there, now we be a great time to donate it to the Red Cross or other relief charity of your choice.

**Not in a basement. In LA we don't have basements.

And my apology is for being predictable.

Second apology: it's OPTION+E, pause, E on a Mac.

I was really holding my horses looking for that "by Yoshitaka Amano," since apparently THAT is the kind of guy who reads this blog I am. Now I know!

Also, Apology 3 sounds pretty much like why I want a better even display of gender in fantasy art...not to open up that can of worms again.

Elric is big in Japan thanks also to Ryou Mizuno, the daddy of "Lodoss War" franchise and well known roleplayer himself.

Soulbreaker/Soulcrusher is clearly a tribute to Stormbringer.

Amano is big on the hawt guys and beefy horses. Always wondered about the horses...

Japanese fantasy art isn't generally my cup of tea, but damn do I love me some Yoshitaka Amano.
'Gorgeous' is a word I would definitely use.

The photo is actually mine. I'm one of the (irregular) players in the Dwimmermount campaign and I took it when I was in Japan on business last year. I was seriously tempted to buy it but had a hard time with the justification as I can't read Japanese.

If--IF-- the whole thing was full of pictures as nice as the cover, I would've just picked it up as an artbook.

DIY D&D is an exceptionally fine way of putting it.

Word Verif: eximsfei
Sounds like it should be the command word for a wand or something.

Now this ... this is a hot, um, elf of some description. At least when I showed my student the photo at the bottom of the story she was thinking it, but I said it: "It's an elf!"

It's Amano. No apologies are necessary. We owe you.

Elric was an anime character BEFORE there was anime... what a shock that girls find him hot. :)

Probably best not to mention that most of his girlfriends end up skewered on Stormbringer after awhile...

You are a class act for tying in the quake/tsunami and providing a link to donate at.

God, how I wish the guys who did Ninja Scroll would do an animated Elric film.