Where The Dials Are

As an example, imagine a platonically simple RPG system, where the maximum importance of things in the game is related to where they come from.

For simplicity's sake we can say it's resolved on a d20.

1. Anything on your character sheet--anything established from the beginning about your character or anything in the players' section of a book about how your class/race abilities are supposed to work (including a fighters' weapons or a wizard's spells)--is worth a maximum of +1 (or a minimum of -1). So it says on your sheet that your PC is strong? That's a +1 to do damage. It says the PC is strong and a fighter? Still only +1. Your PC is strong and a fighter and 10th level? Still only +1.

3. Anything you, the player, think up to do that's a fairly non-situational and reusable tactic--that's worth a maximum of +/-1. So you go "Ok, this is a monster with a shield, so I'll use a flail instead of an axe" (this is, as I understand it, one of the points of using chain weapons--to get around shields). So you'd get a +1. Most new power stunts you'd invent in a superhero game would be included here.

4. Anything that is something the player thought up plus it uses something established that's situational, that's a maximum of +/-2. So like "I scoop up the tar and throw it in the enemy's eyes because that'll distract and maybe blind it" that's a +2. It's not only a player idea, it's a player idea building on the fiction that's set up at that particular moment.

So the pie chart down here sums up the relative influence each factor could have in this scheme, assuming each factor is pushed to its maximum... 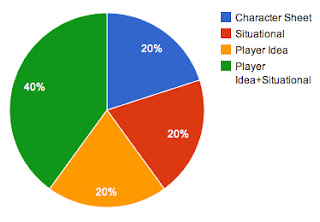 What's the point of this?

Point is a lot of arguments about playstyles basically boil down to how different groups would want to weight these 4 factors.

You can talk about how an encounter-as-GMed by a certain person works (and, to a less accurate degree, how a given game is meant to work or usually works) in terms of how important each of these factors is.

Some people want what's on their character sheet--that blue area--to be like reliably +6 compared to the other stuff, so no situation could overpower what is established about the PC and the way the PC is and s/he's "role-protected". Not only against the GM but against other players. This isn't necessarily about winning, it's about always performing like the character the player imagines. The thief's good at climbing even if the player's no good at thinking up extra reasons the thief should do to be good at climbing.

Some people would want factor 2 to be at +/-6 so that the onus is on the players to solve situations more or less on terms as they are presented by the GM. Yes, your clever plan will give you a bonus, but not so much of a bonus that it overpowers the overall logic of the situation. An only-one-solution puzzle essentially works this way. Trying to "beat a module" like Tomb of Horrors often works a lot like this, although a certain degree of Factor 4 comes into it (like under "crowning moment of awesome"here).

Some people would want to weight the player ideas (3) heavily, so that the game is largely about players shaping the setting creatively. Games where the players get to narrate a lot and the more they narrate the more of a mechanical bonus they get work like this.

Some people would want to weight 4 really heavily so that the game is about players solving scenarios by using resources provided in those scenarios (or previous linked ones, a whole campaign might be considered a "scenario" here). This would be weighted heavily if every encounter is supposed to force players to think outside the box.

These aren't the only factors that affect the outcome of an encounter, of course:


-You could easily add a factor labelled "chance" to the chart--that would simply show swingy a game was. But I think most people already know about that idea. In the scheme above, since it assumes a d20 is being rolled, chance is way more powerful than any of the other stuff, even put together.

-You could also add a factor labelled "GM guidelines" to the chart. There's already a space for player guidelines ("Character Sheet")--the "GM Guidelines" are things like the Monster Manuals numbers or a module's description of how much damage a trap does. Between these two categories you have all the static numbers written into the rules. That factor would describe the maximum amount of influence over the situation the game's author's ideas (rules-as-written for the GM) would have over the situation. This kind of thing is rarely explicitly enforced in play except when players are trying to see if they can "beat" a module as-written. In practice, these factors (giant eagles have 26 hit points?) are basically a subset of the Situation--the GM has total discretion here.

Some other observations here:

-In a wargame like Warhammer 40, where there's little to zero room to go outside the rules, your main tactical concern is to decide when and how to use which absolutely-defined troop type. Factor 1 is king. The enjoyment and complexity comes from having a very wide range of buttons to press and possible interactions you can activate on your turn. That is: if factor 1 is the most important, you'll want a lot of different options at your fingertips to keep things interesting.

-This isn't meant to be an exhaustive description of the parts of games. See my answer to Semiprometheus below...

Still, your classification adds detail that previous explanations lack. Come up with more pretentious terminology and proclaim the correctness of your model on every forum possible and you might displace the Threefold Model. Or don't, and your model will continue to actually explain something.

FOOTNOTE:
Tweet's "Resources" which I think the Forge would call "metagame resources" and which I'd probably call "Player's extradiegetic resources" are indeed a factor in encounters.

But the point of this is not to exhaustively model games but to compare a few factors that contribute to the whole that people fight about a lot.

That we're quibbling over your model means it's useful enough to fine tune and/or adapt. Theories of Everything frequently end up explaining nothing. Like String Theory. Or GNS.

It's not a model. Like going "Some people like Wagner and some people like Puccini and here's why" is not a theory of music. This is just a description of one of many things that go into games.

As a GM, my instincts are to minimize the influence of 1 and 2 and to promote 4, while neither encouraging nor discouraging 3. Most of the OSR games let me do this without all that much trouble, so I run them more than most these days. Some of my players definitely resent minimizing 1, which has led some people to stop playing with me altogether. In my experience you have to train players to engage in category 4, as they would prefer to rely on 1, 2 or 3, roughly in that order.

You could categorize the Various sub-sets of D&D by how much each edition emphasizes each category, which I suppose would look like this:

Categorizing games that way requires making a lot of assumptions about how people typically run those games or interpret those books that I do not have enough data to make.

The only data most of us have access is:
-Our own groups in our area
-The unusual subset of players who attend conventions, and
-People who complain on the internet

Conceded. But if I run across the guy who says I run 3.5 like you run OD&D, my first thought is, like, 'Why are you playing a game where you ignore most of the rules?' I will grant you, most people ran 1st edition like they ran Original D&D, except for the really obvious bits like damage vs. large creatures. But we were told repeatedly by the guys who wrote 3.5 to run the game as it was written, which then determined the play style for those us who did what we were told (yes, object lesson there).

I assume that following rules as written leads to a play style. You seem to be saying (if I am paraphrasing you correctly) that the way you play leads to a playstyle. Absolutely true, but you need a mental pickaxe to get that into the head of those (like me) who either by training or inclination, try to follow the rules as best we can.

I have no experience with people who follow the recommended defaults or trust that doing so will lead to an experience they want, so I'll have to trust you on that.