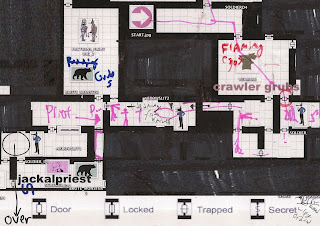 Mandy's sister decided to play and write a paper about it for school. Something about sociology of sex workers.

I can't remember where the 70 pigeons came from. But they were trying to figure out how many it would take to lift Darren's monkey. I figured the number of pigeons required would be inferior to the number that could get a decent grip all at once.

Maybe if they rig up some strings.

We managed to get like 3 minutes into this discussion before someone made the unladen swallow joke.

KK fell in love with a jackal-headed priest last session, but she was an hour late tonight so he was dead by the time she showed up.

Oh yeah, there are these knives, here:

Cursed Daggers of the Jackal Men

They do d4 when they go in, then d4 each round it's stuck in thereafter. Unless you pull it out, in which case it spurts a Japanese gorror-movie-esque fountain of blood for d20 hp then bleeds d4 per round thereafter. The wounds cannot be magically healed short of Remove Curse.

The jackal-headed men carry treated mummy-style bandages to slap over the wounds and prevent the ongoing damage.
_____

If only they hadn't killed the jackal priest he could've removed the curse.

But anyway, now they're trying to get Mandy 8 hours of sleep in a secret corridor.

That was before the Eye of Dread showed up.

They took care of it but Darren rolled a one and accidentally stabbed KK with one of the daggers... 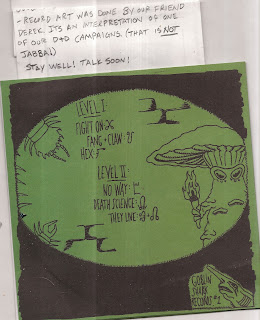 Oh and a band that was gonna use one of my pictures on their album sent me this today.

B) dig the Cursed Daggers of the Jackal Men. Very cool idea!

Playing naked aside, the cursed dagger mechanics would be pretty cool for lances in an Arthurian themed game. The knights in Morte D'Arthur are always getting mortally wounded after a particularly nasty strike, and then die when the lance is removed.

That map. Jackal headed spocks cool. GM question though - do you simply use the doodled up map to GM this temple/jackal pit? How much additional stuff? Full descriptions or a few tables? Curious because it sounds like you run an evocative game and I wobder how much is ad-lib?

my notes are sketchy but cover the whole dungeon in enough detail to run it. nothing is ad libbed except unexpected stuff

Wouldn't it make sense to just repeatedly attack with the Cursed Daggers of the Jackal Men? Each time it is removed it does d20 damage, plus a cyclic bleeding damage (which I'll assume doesn't stack).

So each successful attack where it is removed does d20+d4+any bonus damage due to the wielder, that's a lot of damage. Two successful attacks in a single round will do on average 24 damage, and still have 1d4 damage a round there after (or 2d4 is it stacks)! Sneak attacking with these would be lethal!

Unless the attacker simply can't remove the daggers themselves, and the person who is stabbed has to - which at least keeps the weapons from gutting a group in a quick skirmish attack and then falling back to let them bleed out.

It also lets the PCs get surprised by the d20 damage if they choose to remove them (a common response when you don't know what they do I'm sure). But it also lets them have the fun or returning the favour by pulling them out and stabbing the person back with it!

Overall though the weapon needs balancing imo, even with risk of stabbing allies/yourself with it when crit failing on a 1.

Ah - I was curious because I've been running games with little more than a notated up map and some tables. I am interested to see how others do it.

For some reason I haven't been envious of your superhotgirl amountness until just now when it was revealed that Stoya was playing naked. I wonder why that is?

Like... One could reasonably assume that I would get envious once I realised that you were allowed to and did in fact have sex with all of these women... But nope. Only just now. Stupid brain.

Anyway, speaking of naked, I have some life-drawing modelling to go and do.