Here's an average hex description from the Majestic Wilderlands:

0518 Boars (EL 10): In the thick scrub of the hills live 17 boars (CR 2; hp 22 each). Numerous and wild, they attack anyone disturbing their territory and even pursue unwary travelers for miles.

Here's what I got from looking at the cover of Conan The Barbarian #9:

Garden of Fear A shadowy winged guardian armed with a sword protects a mysterious greenish tower crowned with projecting spikes. 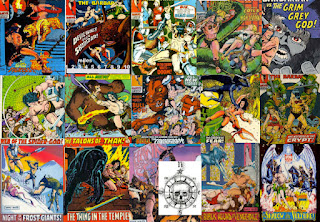 Click to enlarge and when all else fails pull out a grid of Conan covers and go:

"The sea is to the south, there are mountains to the southwest, a garden to the east and Shadrizar lies north. Which way do you want to go?"

If you want to really get fancy you can have everyone take a cigarette break and google the story for whatever comic the PCs landed in after they decide which way they're going, but in a pinch you can probably get most of what you need just looking at the picture.

This could be fun with House of Secrets (http://www.coverbrowser.com/covers/house-of-secrets) or other horror comics too.
Or even those early Justice League

I wonder how it works with Uncanny X-Men?

A more interesting run of House of Secrets:
http://www.coverbrowser.com/covers/house-of-secrets/3

I like the extra content from words on the cover, but if you can do without then the early Heavy Metal run, before it was all space babes all the time is pretty good

1) ouch for the wilderlands


2) ok but could you use the pages of an individual issue similarly laid out as a map of some kind? like 'boss to the south, useful clues to the east, to the west is a moody splash page where buffy/you will be depressed and rally the inner strength to proceed'

or take that one page from Powers that's like 32 little villain faces and use that for your panelcrawl campaign where each of the pictured do-badders must be bested in emotional combat in order to get the magic whatsit.

2. You could (i thought about it) but it'd be hard as the panels in most comics will be pretty repetitive or uninformative.

I do think if you know a comic well and it has a lot of different things going on and it converts easy to your genre you could use one as a "what's the next situation"? generator.

The very first conan comics I ever bought were issues # 41 and #53 and I've never can forget seeing them for the very first time. That image of the tree eating the girl blew my mind as a kid and is was a huge thrill seeing The three "Bothers of the Blade" fighting Conan knowing they were loosely based on the Bentenrai Brothers ( aka Masters of Death) from Long Wolf and Cub. Those comics are just too fucking cool for words.

the MW comes off as stodgy to me when juxtaposed against the conan madness -- i assumed that was intended.

did you ever play/look at everway? the art does nothing for me but the idea is good and it seems like few/no one ran with it -- i've long dreamed of using an Illuminati deck to generate events in a game of conspiratorial weirdness.

-It was not intended, I was just trying to show the amount of gameable content typically provided.

-I have not. If someone makes it easy and interesting for me, i might