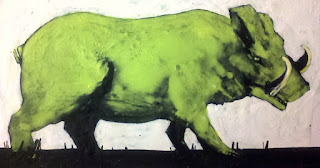 A kind of wild pig, possessing the curved tusks and rich hairless green skin of Satan as depicted in Michael Pacher's Wolfgang und der Teufel. Mome Raths bellow at the coming of danger and gnaw the bones of the dead in the fields where bodies lay burning.
They are used as warpigs by the forces of the Red King. They can swim as well as water spaniels.

HP 13 Speed 1.25 human 1/2 human in water
AC 7/13 (dex) Intelligence Animal (Reference creature: Wardog)
Attack
-Bite: +2 to hit d10hp
Special
-Mome Raths feed on failure. Any miss on a Mome Rath adds d4 to its HP. Rolling a 1 to attack a Mome Rath gives the Mome Rath an extra attack per round for the rest of the encounter.


(for the Alice thing, painting by me--click to make bigger)

Love the special ability. Out of curiosity, how large are these creatures?

really loving the alice inspired things you are doing. ever heard of the wonderland setting by marco chacon.
I think he did two things for it wonderland and the book of knots. I look at them for inspiration sometimes, though I like where you are taking it too.
love gritty, dark feeling settings =)

I can only imagine now Nilbogs with funny hats riding those things through Arzach style desert landscape.

I love this horrible emerald shit of a pig

When do they outgrabe? Also, I assume the slithy toves will be creatures of the white queen?

You should totally make one of them.

I kind of like imagining this pig as being of Tarrasque-esque proportions, where the blades of grass/reeds at its feet are human-sized.

Now we know where the Green Ham of Green Eggs and Ham come from.

I linked this in my Monday Monster roundup. Don't know if you are joining the fun, but I like the monster all the same!

disclaimer: 5 pounds will buy you a fucking shitload of nice beer in my 5x great grandfather's hometown of travelling-through-ancestral-england.

generalized drunken AND aspified comment about all previous posts which i have read:

1) playing dungeons and dragons... for charity. fuck yeah ameriKa! you wouldn't be able to do that in these here parts of you-rope, where by the looks of it heroin claims most of people's cash. (yes trowbridge, my ancestors left you for a reasonnn!!!!!!1)

3) game design class; zak smith, you own that sheeit, don't let anyone else tell ya different, not that you WOullld.

5) thanx for telling me wut gamez you tryed at indiecate.

6) 8-yera-old playing games. fuk yeah. she's like... whoa, dunno about trowbridge, but... wouldn't wanna encounter her on the way home from the king's arms pub.

7) yup, did you trade that award yet?

8) humpty dumpty is scary and the way you drew him i thought of while i was walking down the street in my main county of non-heroin-addict england and i was like, i really like where his style is going because it solves all of the hangups i had about zak smith's art.

10) the future of talking about games: ok. yeah. totally. like, when can i have a constantcon game that is specifically geared toward ME, the dissatisfied-with-games-he-has-seen-but-otherwise-a-total-newbie-nonsnob-lower-middle-class-if-there-fucking-even-is-one -in-this-overtaxed-country intellectual?