Victor Von Doom of Latveria is periodically made medieval in actual Marvel comics. Evil knight behind perforated mask with a few magic-user levels. And he already has a castle with a map. Go nuts.

"It is known that the Time Trapper dominates the wasteland of Earth in its dying millennia....He possesses great armies and weapons of power, the source of which are unknown"

And he looks like that. So you don't even need to change his costume.

He can age you or de-age you or send you through time or whatever.
Just don't remind him how things used to go back in the day.

Dr Fate When He's Bad
Dr Fate is what DC comics has instead of Dr Strange. He gets his powers from an ancient Egyptian helmet so naturally there are lots of stories where someone bad gets the helmet. 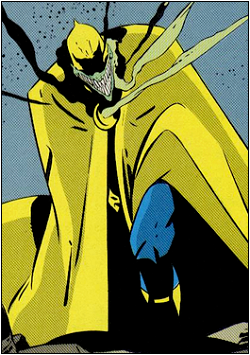 In a Keith Giffen miniseries he makes a demon mouth appear in mid air and projectile vomit raw eldritch plasm on Batman fucking killing him. 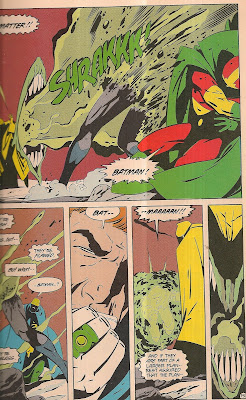 In a Neil Gaiman future story the Fate helmet becomes all corrupt and old and vampiric and suchlike. It sits in a neoEgyptian temple being all...

...and then some idiot does and then Fate uses the poor bastard's mouth to deliver the following critique of Gygaxian cosmology: "Order. It's offal. Chaos. It's garbage. They were just different names for the same thing: The gurgle, ooze, purl and spurt of protoplasm, deluding itself that there's meaning. There is no meaning. Just the flesh. And death. And..." then the helmet sucks the life out of the guy wearing it falls to the floor and it lays there being gross.

Artifact or relic? Hmmm...
The Demon Bear that fought the New Mutants... 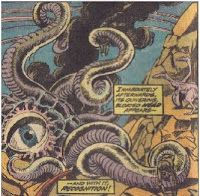 Maybe Shuma-Gorath is cheating--the name is from RE Howard and the rest is pure Lovecraft, but there's something about the platonic tentacle-eyeball-nothing-else simplicity of old S-G that's terribly appealing. And why not give Gorath the same schtick as... 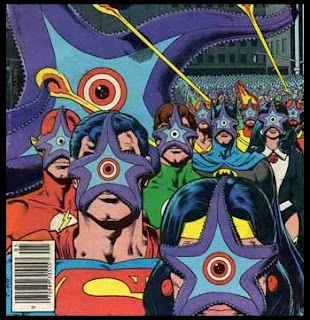 Now, of all the possible individuals who might try to take over the world by having small duplicates of themselves climb onto everyone's face, Starro is maybe less my first choice than, say, Scarlet Johannsen, still, Starro is pretty cool. 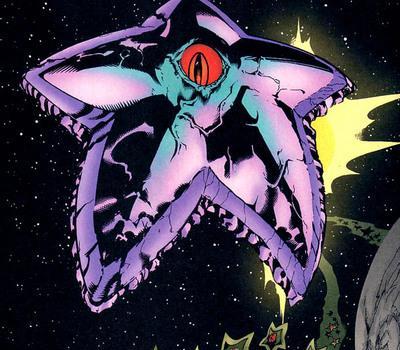 So cool I had a Starro attack the PCs at sea a couple weeks ago...

Marvel's Merlyn
In the case of Alan Moore's take on a manipulative, time-travelling, dimension-hopping Merlyn, a picture is worth a thousand words...

They're big and tough and zap you and are from another dimension. Also they have no minds. Their "No. Appearing" figure is pretty grim.

What If... Robert Plant was a dark elf sorcerer in crazy warpaint who unleashed the Cask of Winters? Then you would be playing some excellent D&D is what. So enjoy that.
The Beast

Not not the blue guy who goes "Oh my stars and garters"--the creature from the Elektra: Assassin miniseries that's worshipped by ninjas and possesses people via evil milk. Also possessed of a fairly impressive traditional claw claw bite routine. 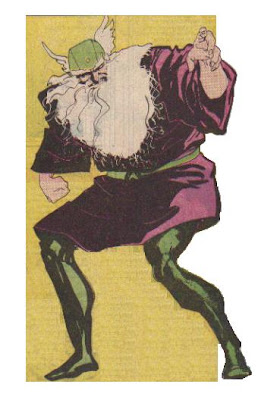 There isn't that much that's special about Mordru per se--he's just another in a long line of beardy wizards--but that issue of Legion of Superheroes (the "Mordru-verse" issue) where he establishes complete Orwellian dominion over Earth using technomagical surveillance and controls all the other villains is pretty sweet. 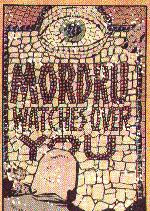 The gorgeous dysversal Earth X miniseries used Machine Man's origins in the old 2001:A Space Odyssey comic series as a backdoor to bring in a lot of visual references to Kubrick's film, but none more memorable than John Paul Leon's image of Marvel Comics omniscient, objective Watcher as a crippled, corrupt version of the 2001 Starchild collapsing under the weight of his own big smug overevolved head.
Ego, the Living Planet 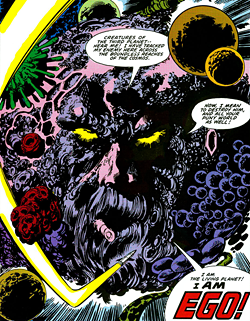 Speaking of big heads. Got the All-My-PCs-Are-Level-20 blues? Have them fight a planet.

He's disturbing and so is his cat.


Etrigan The Demon + The Gargoyle
He's a duke of Hell, he speaks in rhyme and his soul is wedded eternally to an unfortunate scholar named Jason Blood. The only thing not totally D&D about Etrigan is his technicolor outfit...

But that's easily fixed by saying he dresses like Marvel's similar-looking-but-less-cool-acting Gargoyle... 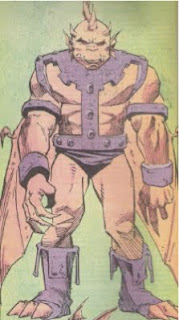 The Time Trapper, also known as the King of Retcon. :D

Most of Marvel's Elders of the Universe are good in this respect. The collector had got a big treasure trove of exotic stuff. The grandmaster likes to put people in high stakes competitions. The champion just likes to beat up the toughest dudes he can find.

Whatabout Glorith for a bombshell baddie who's also sometimes the Time Trapper?

No mention of Dormammu?

@Alexander: I was gonna say...
In looking through some rediscovered folders, I found that my 15-year-old self had plans to use Dormammu as a central bad-guy. Sad to see in my son's Super Hero Squad books that they've reduced him to a bumbling minion of Doctor Doom.

Oh, and Ego the Living Planet was always the height of 70's awesome gonzo Marvel.

[tangent]I loved Bill Sienkiewicz's stint with New Mutants. Sadly Rob Liefeld ensured that I stopped reading (and collecting) this comic. I couldn't even read the story because of his art...[/tangent]

To what extent is this list a guide to what I should totally find and read if I am not much of a comics person?

Here are some great, gameable versions of the Dr. Strange rogues' gallery:

"Need" is a strong word but if you want to do one of those photo-key maps of the Accursed Lodge of the Demon Bear I'm certainly not gonna say no to one.

Technicolor outfits are mega-medieval though.

I figure Kang the Conqueror ( Or at least on of his various identities, I think you could just start making them up ) would make a pretty decent D&D villain as well.

Glorith (like Mordru, mostly) doesn't really have anything to set her apart from a million other megalomaniacal sorceresses and doesn't look as cool as the Time Trapper.

Time Trapper as king of all crypt things - he controls one more dimension than the run of the mill do ...

to a somewhat extent:
if something here looks intriguing I can tell you where to go to get the comics that best exemplify it.

I love Kang but, again, the outfit.

I appreciate the "tongue of abdominal maw as loincloth" thing of the Satannish version.

Maybe one of his other identities would work? Immortus, or the Scarlet Pharoh? ( I don't remember those as well, truthfully.)

Hmmm...Scarlet Pharaoh--who does not exist, who is, actually, your excellent, productive, unconscious conflation of Rama Tut and the Scarlet Centurion--with the cruel face of a Quintesson

In some incarnations, Mordru is a reverse (well sorta) Merlin, having been born ancient at the end of time and getting younger and younger as he lives backward in time.

For clarity, when ever he faces the 30th Century Legion of Superheroes his resembles the picture you see above, i.e. he is a white bearded old man. When he battled the Justice Society in the 20th century, his hair was dark, his beard trim and he appeared to be a fit and good looking fellowing in his 30's.

So he's fought your PCs already in the future and knows what they can do the first time you meet him. (~_^)

I drew Starro as my first tag. Normally not so big on mind control dudes, but Starro refers to starro in 3rd person and is a lazy but utterly sublime design. I heart starro so bad. and the name ! STARRO!

The mindless ones are the perfect replacement for humanity

The only trouble with the Demon Bear is having to resist putting it everywhere.
"You go into a tavern and you see....a...deeeemo..barkeep yes a human barkeeDEMONBEAR DEMON BEAR DEMON BEAR ROLL FOR INITIATIVE"

Token mention of personal suggestions of villains for d&d :Spiral, Neh-Buh-loh and the Sheeda from grant morrisons seven soldiers, and Gorilla Grodd

Are guys who are sort of D&D monsters already disqualified? Because I can speak from experience players get a kick out of a giant white naked regenerating Fabio-haired cannibal who shrieks "WEN-DI-GOOOO!" every few seconds whether they give a shit about comics or not.

Not disqualified but I didn't prioritize them, I mean, Jormugandr is Jormungandr whether in Legends and Lore or in Thor 350

Right, I figured. Same with Rasputin over in Hellboy, Hades over in Wonder Woman, etc. I only bring it up because I've done a more traditional wendigo in a game and the marvel universe one and had a good time with both, so I wanted to give whitey a shout-out.

I could be working off a temporaly suppressed memory. I doubt the other Kangs want to talk about him.

Wildly OT, but I'd feel remiss if I didn't check and make sure that someone had brought this to general attention. D&D As Tenet of Foreign Policy; human rights-related LARPing. No idea yet whether it's wankish or cool or both or neither.

Please check the new Demon Knight title from Paul Corner. It is D&D squared. It included Etrigan (as a cursed Jason blood alternating with the Demon), Madame Xanadu as a witch-sorcerer, Vandal Savage as a immortal, barbarian warrior, the Shinning Knight of the Morrison's fame (a female-posing-as-male paladin), an not-WW amazon, a crippled horsewoman and an Arabian alchemist-fighter. Mordru is one of the villains,an in this time period he is pretty young.

Seen it. Not into it.

Also the surprisingly creepy "mystical doom" in armor made from his dead girl friend's skin: