Bacon and Eggs: A Chill of Cthulhu Production

So I ran a Call of Cthulhu game. Chill style. Meaning just I did Cthulhu modern but everybody had a psychic power (no S.A.V.E.).
But it's Cthulhu, therefore using your psychic power drives you slowly (or quickly) insane.
Simple and effective Chill of Cthulhu paranormal ability mechanic:
1. Dream up an Abnormal Psych Textbook style psychic power ( Scrap Princess took Pyrokinesis, Migellito took Psychic Being Convincingness, Cole took Tactile Postcognition, and Ian took Heat Metal)
2. When you want to use it, decide the percentage chance you want to try to succeed at. Roll under and you get to do it.
3. Then roll the same percentage you chose again to see if you lose d6 SAN on account of you just opened your mind to Forces From Some Fucked Place Your Head Goes When You Do That. 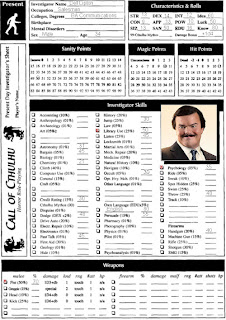 _____
This is the second time I've run this adventure--it's part of a 3-legged campaign my home group runs when the requisites are all in the same city at the same time. That version is non-psychic and 1920's. One of the players in that game is playing occultist, writer, cannibal William Seabrook.
_
Each version starts with the investigators on their way to (in the 20's) London, Paris or Berlin or (in the present-day) London, Berlin, or Tokyo.
_
The problem is the Poison Idea. If three people have the idea at any one time--Ragnarok comes. (Two people had it at once one time--that started WWII).
_
So after their dying uncle or psychic yoga master tells them to stop the idea from erupting the PCs pick a city from the 3 where it is feared the idea may manifest and go. They get on a ship or a plane, depending on time period and look at one of these 2 pictures. 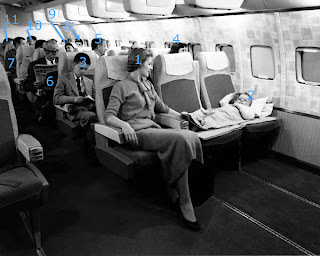 Of these NPCs, some have information. William Seabrook got it outta them by asking around if there was a shipboard poker game. Cole got it by touching guy #7s chair and postcogging the vile presence within him.
Now Cole is, as anyone who has rolled with him will tell you, a great player. He is both irresponsible and proactive. Which is what you want.
Can I vomit on guy #7?
Ok, fail a Con check.
I succeed.
You just open your mouth for a second and hang there with your mouth open like this.
Meanwhile, in the restroom, Scrap Princess rolls a Maximum Impale to disarm the smoke detector and she then has the most relaxing possible smoke break.
Ian charms a stewardess and then--to create a distraction--decides to use his mind to melt, well, whatever instruments he could see when the cockpit door opened.
Is this group God's Gift To The Horror Game GM or what?
And Migellito tried and failed to keep everyone calm. He did however talk a little boy reading Lord of the Flies (#3) through Ian's post Sanity-loss screaming fit, so that was nice.
___
I like these psychic power rules--not a single monster, cultist or freak has appeared and already we have 2 insane players and are a luck roll away from a plane crash.
__
In the 1920's the London segment of the adventure involved kidnapping a patient of the Doctor With No Face, an ambulance race, and taking him back to the hotel to chop off his ear.
In twentytwelve it involved wearing fake moustaches, failing to pick a lock, and--most disturbingly--leaving Scrap alone in a hotel room.
So Scrap has a dream about an egg which her character doesn't realize is a dream (until Scrap reads this AP report). And decides to burn the hotel down.
Did I mention Cole thought guy #7 had eggs for eyes on the plane? Cole thought guy #7 had eggs for eyes on the plane, anyway....
Meanwhile the boys are at the hospital doing exactly what the girls were doing in the hospital around the same time in the 1920a--being in the basement of the hospital in The Terrible Revelation Room fighting a faceless nurse trying to inject them with Unknown Chemicals and thereafter a Doctor whose fragile eggshell face cracks open to reveal some fucked up horror movie stuffs inside and failing SAN checks and being around broken glass. The main difference was the girls brought shotguns.
Meanwhile Scrap decides to go to a bar a block away from the room he just signed into using his real (convict) name and then promptly arsoned.
Things progress on both fronts. We get to hear the following exchanges:
"I grab it by the tentacles and hit the guy in the face with the doctor's decapitated head."
"So you lose d6 SAN for using your pyrokinesis and then d6 more for using it to harm a human being"
"It's not a human being, it's a cop!"
We finish with a lone PC rolling initiative against everyone else in the back of an ambulance taking him away from two buildings he set on fire and toward one that his friends just did, from which unfortunate edifice two of our heroes are fleeing (one in terror, one because it is the absolutely entirely tactically correct and commonsensical thing to do) while our fourth hero staggers through the flames humming "I am the egg man, koo koo kchoo" and asking where the cafeteria is.
A fine, fine game is Chill of Cthulhu.

the egg was a dream? I'm laughing so hard now! ah man!

I actually thought I was being real clever, like "ahahah no eggy trap ambush for me, I'll just burn the place and leave"


My first experience of a cthulhu game was akin to one of darker but hilarious coen brothers films. Maybe "burn after reading?"

I guess if you call smuggling guns and drugs onto a transatlantic passenger flight "irresponsible..."

Your first experience of a cthulhu game appears to be perfect.

From now on you will question _everything_ the GM says in CoC, wondering if it's a dream or not. Your first Cthulhuthing is always what you check for, from what I've seen.

I got tricked by my mother turning into a.. uh... thing. So now I always check to make sure the NPCs arent things. Sometimes the NPCs bleed as a result, which is a plus.

2. I must now track down everything I can find by William Seabrook.

@cole sounds responsible to me, the drugs are to keep your character entertained so he would annoy the other passengers . And then gun? Well that's just incase someone tries to steal your drugs. Security measures are the cornerstone of responsibility .

I thoroughly endorse the ultrasimple Chill of Cthulhu Psychic system. I would certainly be willing to inject it, full-strength, into any CoC setting I was running.

Also, Dell thinks of his ability as Dale Carnegieism. If he talked about it out loud, he would probably call it Carnokinesis. Most of the people he knows would think he was talking about making chili.

You forgot to mention the herd of coked up pigs that we set lose on Campus in the 1920s version---or am I remembering incorrectly?

Because that was one of my favorites bits.

If it didn't happen, it *should* have!

Any 1920's CoC game that involves college, herds of swine, and large amounts of(completely legal!)narcotics has the potential to be a 5-star epic, at the very least.

Oddly enough, that sounds like something that could've happened on a 1920's College Campus, Mythos or not. :-)