Imagine A GM, Rolling On An Orange Chart. Forever. 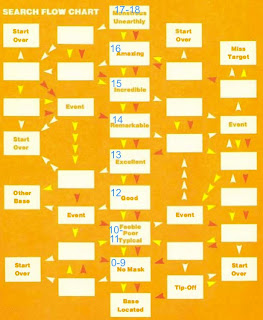 If you click it, it will be bigger.
So, as I pointed out to back in that long Sandboxes And The Roguish Work Ethic post back in whenever I wrote it, one way to make a hero-centric sandbox is to have the heroes acting as revolutionaries in an oppressive 1984/WH40k/RIFTS-coalition/Handmaid's Tale/Animal-Farm-In-Gamma-World/Vecnacracy/Age-of-Apocalypse/Legion-of-Superheroes-Vol-4/Occupied France/Pretty Much Anywhere When The Mafia's After You/Ballardian Distopia horrible suckworld or otherwise metaphorical badplace.
Conveniently enough, there is an old module--Nightmares of Future Past--for Marvel Super-Heroes/FASERIP by Steve Winter, which has that exact concept as a premise. And, more importantly for me here today--it has a fun chart!
The chart is about the villains finding the party's hideout. They roll once a day.
It works in the following way:
Your baddies start in the middle column where I put some blue numbers.
The idea is the players have some sort of scrambly device protecting them from being found by the Mutant Detectors. The device can be good or crappy or great or whatever--the central column goes from "no mask" (that is, no protection device) all the way up thru Marvel's rank system Feeble, Poor, Typical.....up to Unearthly.
Side note: naturally you can sub in the rank system for whatever system you're using and sub in the antidetection device for whatever the PCs are using to conceal themselves. I have put in the d20 numbers. We can say they represent the Intelligence of the party member who designed the camouflage for the PCs base, or the stealth number of the party's thief, or the DC of the protection spells the wizard is using to hide everybody or...whatever. Just basically know that the best possible thing the PCs could pull off would get them up at the top and if they're like fuck it we don't give a fuck they're down in the No Mask box.
So you start each day with the fascists looking for our heroes. They roll on the appropriate middle-column box matching the level of the heroes' concealment on the first day. If they fail their roll, then that's a white result. If they get even (like they need to roll 6 or above and they roll 6) then that's a green result (I know, there's no green on the chart, chill--all shall be explained), if they succeed unequivocally that's a yellow result, and if they succeed like whoa that's a red result.
So you tick off the box where the villains are. If you get a white result, you follow the white arrow and tick over to that box. If you get a green result, you stay where you are. If you get a yellow result or a red, you follow those.
So you just moved to a new box. Rock on. That was fun.
The new box is interpreted as follows:
-Base Located means the villains bust in to the heroes' base.
-Start Over means you go back to the middle and start over. I know, you are indeed shocked and so glad I told you.
-Other Base means the villains have found some other revolutionary cell, not you. There'll be news of it that'll get back to the heroes.
-Tip-off means the Man has gone and done something which makes it obvious they're on the heroes' trail and so the party knows.
-Miss Target means the villains have just raided...an umbrella factory? A House of Pies? WTF? They hit the wrong place. It's funny.
-Event means--in the original--a whole list of various thingamavents that are interesting that could happen on Fascist Mutanthunt Earth. In the original it's like "Oh there's a mutant just escaped and being chased by Sentinels--do you help or not?" or "A bunch of Boy Scouts accidentally stumble on your base" et cetera. This is the place where you write a chart of events that are specific to your setting.
-All The Blank Boxes And All The Results Above 'Base Located' In the Central Column just mean nothing happened that day and the heroes are left to make their own trouble that day or you just go "Ok, Wednesday's quiet" and you tick over there and roll again the next day.
At any rate, after you resolve a box, the villains start there and roll again the next day from there.
____
In addition to this chart, Future Past suggests the brilliant and traumautizing idea of using the players' home town as the hellworld sandbox in question.
Now, on account of Google maps and streetview this is an even better idea than it was when the module is written. Hell, set it anywhere you want. 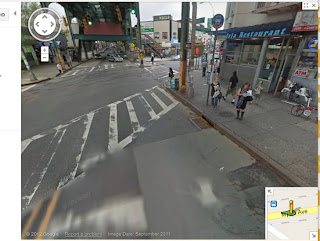 Ahhhh, Bushwick, I miss you. If you ever end up on this corner, run do not walk to Las Islas and get some chicken and rice and 2 of the orange ball things. Unless it's taken over by robot logiceater bad domination machines.
Now the only part left is to pick some local landmarks to serve as possible targets for your PCs' cell. Which of course they have to walk to while you click "forward" on Google street view. If there aren't like 9 zombie games on the market which suggest exactly this method I'll eat...I'll eat like some pasta.
_______
BUT WAIT THERE'S MORE
So I'm also thinking you could use this for a war. Basically, instead of the middle column representing just how well-concealed the party is, it could, in general, represent how close the party is to their target--Confederate Richmond or The Gates of Mordor or The Death Star or any other target. Instead of "Base Located" the box is "Your unit attacked".
Or just otherwise how conspicuous the PCs are, on a scale.
Like if you imagine the Shire-To-Mordor hexmap plus The 9 and the Orcs rolling on this chart every day, then you can pretty much model everything that happens in LOTR.
In effect, the Orange Fascist Chart functions as a kind of counterforce to a hexmap. The heroes explore or seek and the villains roam around the orange chart, making stuff happen.
Unlike just a straight d100 chart of events to roll on each day, it models the heroes' attempts to hide themselves a little better plus the villains' attempts to find them is dependent on how well they did the day before without a lotta math. Plus you don't have to think up all your events for the table at once, just having one event locked and loaded if you roll "event" is good enough. The rest takes care of itself.
That said, there's probably a way to model it pretty closely where you roll on a chart which has more results on it then the die has sides--add numbers if the PCs are well-hidden, subtract if they're not, add if the last roll was successful, subtract if it wasn't. etc. But hey, this chart's already here, might as well use it.

Which is the starting square? They all have arrows both pointing to and away.

Really? All those boxes labeled Incredible, Amazing, Unearthly with numbers on them mean "nothing happened"? What do the numbers mean, anyway?

What happens if the PCs decide to move their base? Can they affect this at all?

Interesting. I have a feeling my players will be getting chased very soon so this will come in handy. They have a mobile base though, not sure if the chart necessarily needs to be modified for that but I've got some ideas.

My mother always warned me that if I clicked it I would go blind. I suppose that explains why I've worn glasses since age 8. :)

Nifty orange flow chart. I like what you've done with it. The street view idea in particular put ideas in my head for some shenanigans.

Love it! The use of street view is one of those "so obvious why didn't I think of that?" Also reminds me of something put together a long time ago (2-plus years) by Ode to Black Dougal.

Except his mechanic was rolling from the party's pov. I could imagine both charts being used at the same time. The part is essentially rolling to pull something off / find a particular location while meanwhile the big bass are trying to locate the party. Cool stuff!!

And great allusion to Orwell in the title of your post! (It sounded familiar, but it took me a few minutes to place it.)

I ran 'Future Past' at length in high school, it's absolutely awesome, and I remember using that chart when the PCs ('Apollo' the alien robot, and Robert 'Darkangel' D'Arcangelo the occultist) were on the run from the Sentinels. There are some other adventures - D&D ones, I think - that use similar charts, to different effects.

Oh, this brings back memories. Ran the 'Futures Past' storyline back in my college days.

If I ever get a chance to run the V&V sandbox setting that's currently noodling in my head, I would probably adapt this chart, except for the reverse purpose of seeing if the heroes can find the various villain bases during their patrols.

That was a short comment, but it was a complete answer. I guess I just couldn't process those paragraphs till I understood the point of the system.

p.s. I think Steve Winter, of This Chart fame is here,

I absolutely love this scenario. It had three sequels, the second and fourth of which are also awesome.

Despite a lot of middling adventures, MSHRPG really shined here.

Great find! I remember a few products of that era with clever mechanical bits outside of their own normal rules. It reminds me of the Chase chart from TSR's Indiana Jones RPG, although I like this chart idea (and what you did with it) much better.

The orange chart is a Markov chain, like "Snakes 'n Ladders". In general, it could be used to represent any situation where what happens today depends on what happened yesterday (or an hour ago, or the previous round - whatever unit of time is meaningful).

You could represent it as a single table, but I think it would be harder to keep track of that way.

Zak, this makes me happy! How do you keep coming up with genius new ways to create meaningful and interesting ways to game or run games? Jealous!

you can't just say "vecnacracy" and then move on and not talk about it as if that isn't a fucking sick idea. no.