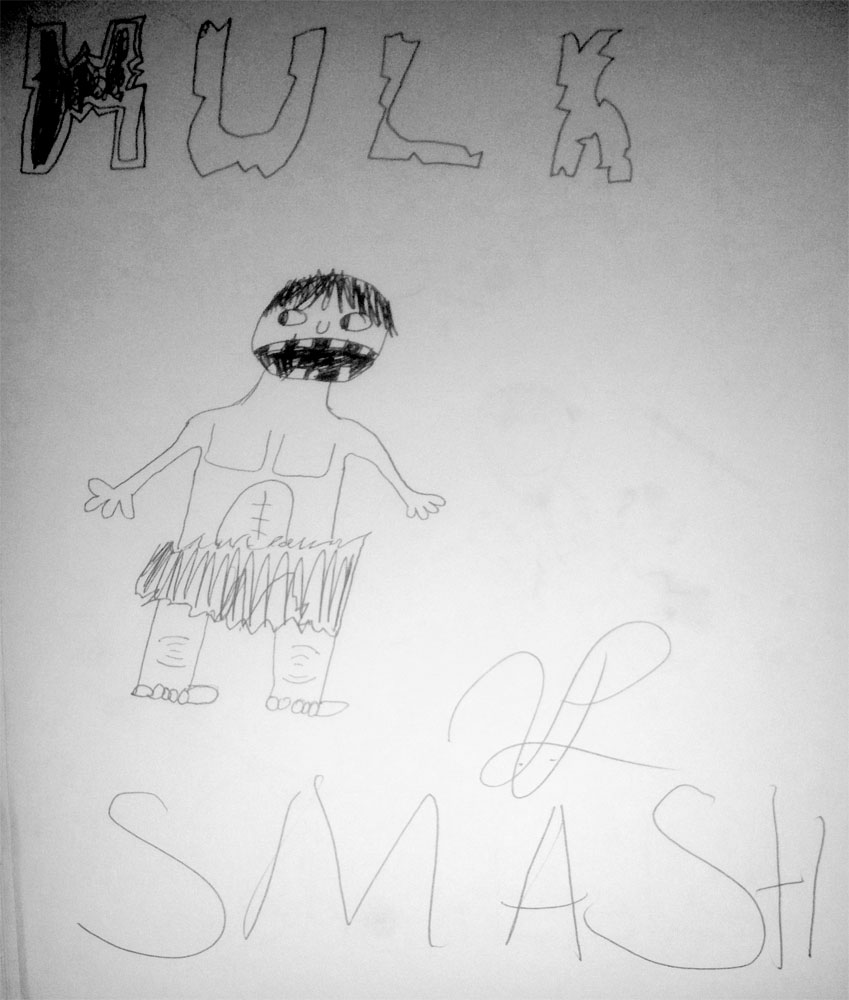 So I have been thinking about the new Marvel Heroic Game and...(blah blah boringfastforward)...

...since I like the Panel-By-Panel action but not a lot of the other stuff, I came up with...

This Brand New Superhero Game System I Wrote In 15 Minutes

If we can't make it tonight (on account of it's my berfday), then can I comment here to nab a spot in the next playtest/game?

Sounds super fun, despite my initial gut-cynicsim reaction. Would love to pop a beer and make some comic action happen.

"I know fuck-all about The Tick"

This needs to be remedied, ASAP.

Reminds me a lot of Risus, which we played the crap out of in high school.

We were all dumb drama nerds at the time.

I will agree that this is somewhat Risus-y. It's interesting. I would definitely give it a go.

Why would you play a character using d4s? Seems like it would be hard to win a fight, especially with two, like poor Spidey up there. Not that Spiderman should be winning a toe-to-toe Hulk fight, but only allowing him to use his super agility once every few rounds is like tying an arm behind his back, right? It's what he does.

Also, could there be a situation where the Hulk is ever bad at anything? He's always going to roll a d12 as long as the player can somehow shoehorn one of his traits into it.

The Hulk is created using more total points than Spider Man. In most point buy systems this is important.

Spidey is only using his agility once every few rounds (or rather--the die associated with it--he can actually use it as much as he likes in the fiction) because the game follows panel-to-panel logic more than tactical logic.

It's less that he's not using it as it is he's only showcasing the agility or thought bubbling or talking about that specific thing about himself every 2 exchanges.

Now why would Spidey's player want to buy 2 d4 traits rather than one d8 trait? Sometimes it's better--exhaustion sets in slower. A guy like Batman probably has like a dozen d4 traits--little gimmicks he can pull out of his belt just in case the opposition rolls a 1 or a 2. Also, in the advancement system (which you haven't seen) new traits start at d4.

The Hulk is always going to be good in a fight compared to a character made with less points. Though if heroes gang up on him, he may eventually run out of dice during an encounter (exhustion) and lose.

Again: plot logic. In a Hulk comic, the leader may shoot Hulk with a brain zap ray, but the Hulk still gets to be in most panels of a Hulk comic book.

Figuring out how the Hulk is using, say, Jumping to counter a magic sleep spell is part of the game. Your job is to "write" a panel where that makes sense. Then you get to use the die.

Your last two posts have been really excellent. Is there a way to use the two together? If you decide to do another session a little later Saturday or on Sunday I hope you'll let us know, I've already made four guys but I'm working til 2AM tonight.

It's funny I was just thinking about that FASERIP/Heroic conversation and how a Gigacrawler-style crowdsources superhero game would be awesome...

I approve this product or service! *STAMP*

oh. my. gods. there is genius everywhere. its all over my monitor. did you make this mess, zak?

Reminds me a lot of Button Men, by Cheap Ass Games... for what it is worth, I approve!

I have a question!

Let's say I want to put Batman vs say, Two Face. Two Face has an army of mooks. Would "Army of Goons in themed outfits" make up most of Two Face's traits in this case, or would I make a bunch of dudes with like d3 hitpoints and a bunch of moves like "Baseball bat d4" or something and then Batman has to beat them all up at once?

my current assumption is a group of goons would be treated as a single character with-collectively--about the same number of HP as any other NPC. Like a swarm in 3.5 basically.

that makes the most sense, that's all about making this about batman, which is kind of the point as you said earlier. like if you're fighting a gang or something, or foiling the bank heist part of the plan where Two Face is stealing some important bracelet or whatever but he already flipped his coin and bugged out.

i guess if you wanted to make it about two face vs batman, like in Adam West Batman where he throws like two punches and beats up all the goons in five seconds (like two panels in a comic) and then the bad guy pulls out some dirty trick or whatever, you'd still throw a couple goon squads in his points with some corny dialog. "rip the caped crusader into heads and tails!" (implying bisecting him i'm bad at this stuff cut me some slack) or something awful like that. I'm not really sure what else "mastermind" guys like that could even do to be a compelling fight?

This looks hilarious and awesome and makes people use a whole bunch of dice all the time, which is cool.

Similarly, how will you handle Rogue's power-drain? It seems like that should work differently from a normal superpower since after she uses it she gains the other person's superpower. At the same level he had it? I'm not sure, since I never read the comics.

If there are what amounts to equipment rules, and advancement rules, I don't see why this wouldn't work for a dungeon-crawl + player stronghold game.

Super Weaknesses? Having obscure, precise, or downright silly weaknesses is a part of the superhero mythos.

I propose:
A power with a limitation gets a one-die upgrade bonus, maximum d12, if it has some kind of arbitrary restriction (subject to GM approval).

If all of a hero's abilities have the same restriction, then it's the same as the character being powerless against that: Superman is in trouble if he gets hit with a Kryptonite-based schtick, because none of his powers will work against it.

Any more on this? Like how did the playtest go? Or any further previously-for-G+-only rulesbits? Not trying to pressure you into producing content to my specifications, just curious.

It works. I think it'd be real good for people I am not, like little kids. more late rmaybe