Do Your Dumb Thing

-The early draft of Huge Ruined Scott's Dwarfland (sample here) is very good. And I hope I am not making life too difficult for Scott by saying you should try to get your hands on the final thing the very second it is available.
-Other people impressing me regularly lately with Way Better Than Anything Published include:
Jasons at The Dungeon Dozen: Some of the stuff you'll go Ok, funny but a bit gonzo to contort my whole campaign to fit the lunacy here on account of I rolled a 4, but 50%-70% of the tables I have printed out, clipped up and scotch-taped them into my GM book because they are getting used and soon and repeatedly. (And yes I find that this is actually faster than using the fucking computer.) 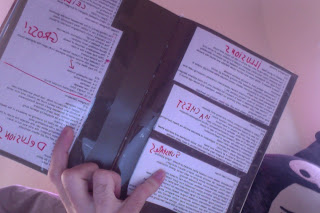 Scrap Princess at Monster Manual Sewn From Pants (which title serves as well now as a metaphor for the best of the Old School Ruckus as it sometimes serves as a literal explanation of the content of the blog) who is now just fucking Planescape right up down and inside out enough that I now know exactly what levels 13+ are going to look like on a bad day. Scrap's Planescape stuff is so good I don't even read it. That's how good. What I mean is: when I check my email and the blogs and whatever in the morning, I don't read Scrap's entries, I save them for later and read them in one sitting with Dr Pepper and whiskey beside me like I read Heidigger or Biomega or otherwise actual literature. Like I have to wrap my mind around it. Like there is the exhaustion associated with actual thought involved.
-What I like best about Huge Ruined Scott's Dwarfland is that I look at each bit and go "That's great!". What I like second best is then I go "...and it's totally the opposite of how I would've done it". Only Gnomes and Dwarves? Fuck that. Cranky bellwhistle OD&D-specific mechanics? Fuck that. Limited classes and races. Fuck that. Standard spell list? Fuck that. Only in hardcopy format? Fuck that. Alignment? Fuck that. Same monsters over and over? Fuck that. Old-style format fetishism? Fuck that. And yeah though verily it thoroughly is totally rocktastical. And all those decisions I would not have made make sense and whatever I can squeeze out of Dwarfland is going to its own particular place on my map (I already have a convention assuming PCs are frequently "spirited away by elves" (roll on Pendragon elf-spiriting away tables) to explain Hollywood Attendance Lunacy in my group) (nested fucking parenthesis, see that?). So yeah anyway Dwarfland may be elfspiritingville adjacent or otherwise some kind of meta-answer to where PCs go when their player has a 8am flight to San F to do something for kink.com.
(And in Scott's case there's this great literary effect where you think you are reading Gygax for minutes at a time and then Scott comes around the corner and taps you on the shoulder. Like the way Jack Vance can trick you into thinking you're reading PG Wodehouse and then -pip- sardine-smack.

Specific rules and statistics for Dwarf-Land wargaming are beyond the purview of this supplement.

The Referee is welcomed to alter or disregard the rules variants herein as he sees fit.

Further game aids may detail other regions of the milieu, e.g., Elf-Land or the Empire of the Men of Zoob, but one is advised not to hold one's breath.)

(Compare and contrast with Geoffrey McKinney's deadpan approach to Early Gygaxian in Carcosa, where strict wargame prose is used to describeWait, What In Fuck? Seriously? The God That does what now?)

(Readers spotting other examples of skillful employment of The Ironic Yet Not Parodic Gygaxian Mode should leave them in the comments for use in a paper to be published 900 years from now when anyone cares.)

-What the actual point of that was, while I do indeed yammer on the subject of Make The Thing Useful and don't be a pointless Old School fetishist and nostalgia is dumb and boring, I also totally endorse the way Scott is putting Dwarfland together and think there is an important hair to split here. Scott asketh on his Blog:

Insofar as it’s possible, given the tools I’ve decided to work with, I’m going to make things concise and (hopefully) as well-organized as I can under the circumstances. But I know myself well enough to realize that part of the project’s appeal, to me, is the idea of creating my own “gamebook as artifact” (Trey’s term), with all of the self-conscious biting of the 1970s DIY aesthetic that entails. Hopefully that won’t render the manuscript completely unusable to folks who would otherwise be interested.

And then right after that I got an email from some whole other guy asking "Hey I want to put something out, what kind of stuff would you be interested in seeing?" and then other people just periodically ask that. Now sometimes it's good to step outside yourself and go "Ok, I know shit works like this, but who else does, should I explain that?" and doing that gives you ideas, but primarily I think what I told Scott...
If you were a robot making me a product from scratch I'd go "Screw nostalgia, make a fucking product that's fucking organized so I can fucking find your fucking dwarf trait table when I fucking need it". But the fuel of this kind of (free) thing is love, (easy equation: you have more love=we get more product) so I think you have to love whatever you are doing and the way you are doing it enough to keep adding to it in ways that seem fun for you to get it to be as big and cool as possible. So, yeah, do it the way that seems most natural to you. You'll probably manage to build some new and interesting inventions on top of things you wouldn't have included without the fetishism. So if you have to stand on the shoulders of your own nostalgia to give us something new, I'm not gonna yell, "Hey, get down from there and get back to work!"
We can always clip out your lunacy and paste it in our ideas later. I'd rather have useless eccentric bullshit you put in there because you love it than less total cool ideas because without that stuff you just won't be excited enough to finish it.
Follow your dumb muse. You can always edit later.

Well said. Anything can be worthwhile when it's created by someone who really loves what one's doing. I think Matthew Goulish put it well:

"We may agree on the premise that each work of art is at least in part perfect, while each critic is at least in part imperfect. We may then look to each work of art not for its faults and shortcomings, but for its moments of exhilaration, in an effort to bring our own imperfections into sympathetic vibration with these moments, and thus effect a creative change in ourselves."

On the other hand, nothing is worse than mediocre, boring, going-through-the-motions pap that people have no personal interest or investment in.

Thank you for the input, Zak. I realize the whole "glue-sniffing Arts and Crafts" approach is likely to put some folks off and maybe make the manuscript unusable to people who'd have otherwise liked it, but I actually, unironically like working this way. I spend my professional days turning out (what I hope is) well-organized, lucid, purpose-built writing, so in my creative time I like to indulge my febrile side.

Thanks for the mention, Zak! I'm saving that picture among my secret things.
I too have really enjoyed looking at both of Scrap Princess' blogs and HRS' Dwarf-Land is a pleasure even in its early stages.
Scott: If lavishing D-L with additional TLC diminishes the chances of further volumes appearing, I say call it done and move on. Despite your admonition, I'm holding my breath.
I must learn about the men of Zoob.

A year from now when the true extend of my work is known, people will look back at this and say to themselves "why did Zak encourage her?" and "why did we not know to stop this?" but by then it will be far far too late.

I think when I'm back in New Zealand I'll will get a copy of dwarf land. I too agree with the looking like the exact opposite of how I would of done stuff but it is something new , good and pure and I like .

Can we get this on a T-shirt? :-)
All the best 'official' RPG material that I own is the product of love. Whitebox OD&D, Traveller, Tunnels & Trolls(All Editions), Holmes Blue Book and Moldvay/Marsh/Cook B/X D&D, Runequest, Call of Cthulu, Stormbringer 1st Edition, and the best of all their attendant supplements have that verve and enthusiasm that products of a more corporate era lack.(In the main, there are, of course, exceptions to the 'rule' of 'comittee driven' awfulness.) Thankfully, this more modern age is bringing the awesome back through homemade projects, personal and group insights via blogs and fora, and just general participation in the hobby.

As they say, a journey is more than just the destination. In the sense that a measured, pleasant trip is far more satisfying for the traveler than a drawn-out slog, the end results in the case of this particular intellectual exercise should be rewarding for everyone!

It's also sweet to see an RPG being created with handwritten notes and a typewriter again. That's the way I produced my first homebrew rules set back in the day, and I found the slow, deliberate pacing and terseness of composition encouraged by the process to be quite fulfilling. Not to mention, the pamphlet produced was slim and easy to reference, with conciseness superseding my usual logorrhea. All-in-all, much more useable and meaningful than an easily and endlessly revised work comprised of electrical impulses, imo.

Awesome work there on Planescraps! Someone really did need to put the hammer down on this rather staid, but potentially interesting campaign world, imo. I personally felt it should've been more esoteric, if not alien, myself and could never really get into it. Besides, I used(and still use) a homebrew where 'fiends' roam about freely anyhow, with some even joining the player groups as PCs and NPCs. Naturally with my campaign being what it was(is), I wasn't all that tempted by the OMZG there's dyvlz and daemonz, we're all Metal now(for real, this time, but not the juvenile stabby/bitey/clawy/animate dead mobilr bags of big-money XP from First Edition, but we're All Deep Now, with philosophy and stuffs) ad campaigns TSR pitched the Box Set with back in the mid 90s. Many of the RPGers at my High School were big up on it, though.

The End of Earth will come from... the ends of the Earth? :-/ I, for one, would have never suspected. Man, I always had my eye on some *other* out of the way place like Transnistra to summon Hastur or something, not Australia's little buddy. Looks like I better bone up on going mad from the revelation and/or fleeing from the deadly light into the peace and safety of a new dark age..... ;-)