<---(Satine shown here totally not in the middle of running a game) So my 5th level thief, Blixa, started life as a Warhammer PC. He then, through the magic of FLAILSNAILS Google + games, has migrated through the D&D retroclone Swords & Wizardry, then AD&D, possibly Mentzer red box-era D&D in there, Labyrinth Lord (another clone), Lamentations of the Flame Princess: Weird Fantasy, and now, for his greatest challenge ever, we took this 3d6-rolled-in-order schmuck and kitted him out with skills, feats and dailies so he can roll 4th Edition style (and his little dog, too)...
And--god help us--our girl Satine is the DM.

Actually Satine's been DMing a lot lately since she started organizing twice-weekly games at Meltdown Comics* but since I've been in another country all winter this was my first chance to actually go to the comic book store and see her do it. Some notes:

-Did you see that episode of Axe** where Satine lost her PC and was saying how she'd lost the last one 15 years before? You know how she lost that one? Hell hounds. You know what she had us fight? Hell hounds.

-4e's much-lauded balance relies on several assumptions, one being that your PC has 4e stats. Mine doesn't. He's got a 7 strength, 7 con and his best score is a 14 dex. I had to self-balance by trying as hard as possible never to ever do anything that required me rolling the dice. Which is exactly how I run Blixa in every other game. (Thieves suck) (Yet oddly this thief is one of the highest level FLAILSNAILS PCs.)(And people die like flies in those games.)(Go figure.)
-Satine's good at describing things as they happen "It explodes and there's a shimmer of light..." etc. and has an admirably relaxed attitude toward the Rules As Written. We're doing group initiative f'r'example. World hasn't ended yet.

-So I'm in a ring of fire, right? Because I brought flaming oil with me and these are ice hell hounds...

-Best 4e moment of the night: So all the other players are totally new to the game--this is their first campaign (and they're so sweet). This one kid is trying to shoot a hellhound with an arrow and decides he'll run so that me and my ring of fire are between him and the hell hound, then shoot an arrow through the flame, so it catches on fire on the way and then hits the hell hound. Excellent***.

-Worst 4e moment of the night: The brand new girl (the D&DMelt crowd is about 20% female) with her psion has seriously this 4 page character sheet and has to wade through it like a bucket of pint tar every round. Satine did a good job of priming the kids with "Hey you can do whatever you want, these are just some of the things you can do" but still, a 4e sheet is a lot to handle and poorly organized. And the fact that the online builder does it for you means the new girl wasn't along for the ride in making all these numbers happen so she doesn't remember them.

-Kinda What You'd Expect 4e moment of the night: The new girl finally finds the part of her character sheet where she can use her brain powers to make the hellhounds fight each other. Everybody is like Whoa, you're awesome! She seems much happier and more relaxed and pro-active once we're out of combat rounds.

-So there's one of those situations where you grab an NPC to interrogate and eventually--you guessed it--the NPC loses an ear. That always happens. Do you blame Tarantino or Lynch or do you blame ears? They look so cut-offable.
-The kids love Satine. It's cute. I hope they aren't traumatized when she kills them. 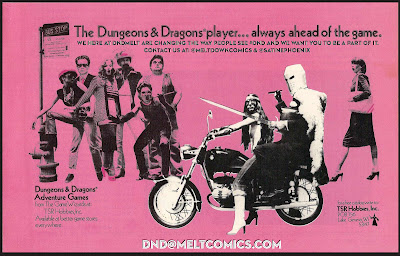 ______________
*Hollywood geography lesson: Meltdown Comics, by dint of being in central Hollywood across from Guitar Center and also massive, is sort of the Hollywood funtelligentsia's front lawn, like you take the MGM executive you're trying to talk into producing your Alita Battle Angel movie to eat at Toi across the street and then go buy an Alita Battle Angel comic book so you can go "See she looks like this?" and then he goes "I get it, I get it...I'm seeing...Cameron Diaz?" and then you cry--with the much smaller and less vinyl-toy-infested Secret Headquarters in Silver Lake being more the same cohort's den/drawing room, like where you go to meet up with the other screenwriters and special effects guys and DJs and go "Cameron Diaz? I know, right, but I'm getting 9 figures just for the treatment so fuck it".

***Even if there's no way I would've let him do that. Unless maybe he coated the arrow in oil first. But hey, adventure is the aestheticization of physics

Email ThisBlogThis!Share to TwitterShare to FacebookShare to Pinterest
Labels: actual play, DnD, I Hit It With My Axe, players

Yeah, but did Blixa live?

Nice writeup. It's amazing all the things we thought burning oil could do when we were kids but it turns out not so much.

Scott, didn't you know that D&D lamp oil is derived from fire beetles? That stuff is crazy combustible. That's why peasant huts self-immolate so frequently.

I hope that straitjacket also has an option for tying the arms behind the back, because otherwise you don't have unrestricted access to her boobs and then what's the point of an open-boob restraint system?

Please Zod I hope you're not serious about that Battle Angel Alita/Cameron Diaz thing. At least dig up the corpse of Lucy Liu...

I have nothing useful to say here other than Satine is the first DM I've seen that fulfilled the promise of Ms. Frost in Jack Chick's Dark Dungeons.

Hey man, I'm just a lurker, I miss lots of the crap that goes on. Thankfully. Will start a blog when this PhD ends I promise.

By the way, thanks for always exposing breasts on your blog - maybe people will realize women have them and stop freaking out whenever someone breastfeeds in public.

It's pretty need how you guys are pretty much playing your way through the history of D&D.

Also, if Satine wants to GM in that outfit, I could recommend a few "GM doesn't roll" games. Just sayin'.

Dark Dungeons is almost like a recruitment tool for gaming, it makes it so cool.

Sadly only anti-gaming material my parents encountered back then was Mazes & Monsters and they were concerned that would gaming turn their teenage son in to Forrest Gump, fate rightly concerned more horrible than turning in to cultist.

Who cares about Blixa, what about Abe Lincoln Vampire Hunter?

I haven't read the rest of the article yet, but Blixa is an awesome name for a thief. I approve wholeheartedly :-)

If my one podcast conversation with Satine is any indication, she is the best DM ever to exist (Take that Monte Cook)

Its probably a good thing thats not Satine being the DM in the picture. Its looks awful hard for her to roll the dice all trussed up like that.

A) I still fucking love your perfidious system agnosticism. Refreshing for the body and the spirit.