Use This Stuff, It's Good, I Know I'm Gonna

So, the judging of the "Vornheim: Hack This Book" contest is complete. It really was harder to judge than I expected--I promise I'm not just saying that: I decided if I'm going to use a given table or hack, it has to win a prize. So more people won prizes than I expected. If there is ever a second edition of the book, I will try to get some of this material into it. Seriously.
__________
Let's start with the 5-way tie for third place:

-Kiel Chenier's "Random Tavern Entertainment" table should liven up your local dive and maybe give you some plot hooks on the way;

-Marquis de Carabas' re-skinned a huge chunk of Vornheim for use in a modern day “Vampire: The Masquerade” setting. Although I don't play Vampire probably somebody who reads this does--and it's hard to imagine them not finding at least some of his massive pdf useful--so he gets a prize;

-Next, the indefatigable wrathofzombies deserves a prize for his gruesome and inspiring "Grave Diggin'" table, perfect for those times when neither you nor your players knows what's supposed to be in that coffin;

-Steve of Bevedog's "Vornheim Communication Networks" is the kind of thing I wish I'd thought of when I wrote the book. And now, thanks to him, I have the opportunity to pretend I did.
___________
Now, second place goes to Jeremy Duncan's "Rival adventuring Parties" and "Rural Innn/Tavern" tables, which are interesting and thorough enough that a lazy GM could probably get a whole session of adventures out of them without much effort.
__________
And first place goes to Dan Voyce (quoth Connie: "That Dan Voyce is pretty creative") for his "Theater Amphisbaena" location, which I already posted and which I will be chopping to fit Vornheim Earth-Prime momentarily and also for his less-gigantic but still entirely disturbing and more-original-than-you'd-think-at-first "Nasty Little Idols" table, which I now reproduce here. 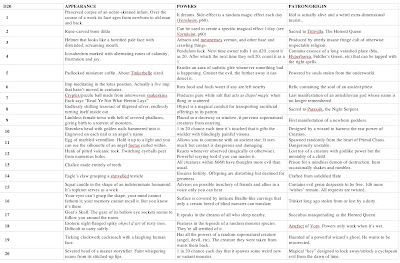 If you won a prize, email me. I know you know my address because you already used it.

And Happy Birthday Gary. We still play your game.


_______________
P.S. Wanna play via videochat? At least three DMs have posted games they will be running on the Constantcon thread already as of right now and a few more are threatening to. Check it out. (If you're interested in running or playing please do post there, not here, it'll make everybody's life way easier.)

Wow! You did not lie, that Idols Chart is sick awesome. Thank you very much. Even if I do run science-fiction, I do love me some good game mechanics and charts regardless of genre and that chart is wicked.

re: pdf hosting-- could it be put up on Google Docs? I'm not sure what their upload size limit is, if any.

Also, that "Nasty Little Idols" table is so fucking metal I subconsciously added little umlauts over all the vowels. Wonderfully creepy and disturbing.

I can help with the pdf thing if you like.

Wow, these are all damn good though. I've never had such an intense dualistic feeling of "gosh, these are cool" and "gosh, these are disturbing and I'm glad no one has my address." (Mr. 'Patrons uncomfortably aroused', I'm looking at you).

Happy Garyday everyone.
Hope it's a crit!

"Although I don't play Vampire probably somebody who reads this does--and it's hard to imagine them not finding at least some of his massive pdf useful--so he gets a prize."

Certainly they do, certainly they will, certainly he should. I think I'm being set up to run the Masquerade again at some point and having a minor NPC randomiser is going to come in very useful...

Random Idol Chart was exactly what I needed...

Five-way tie for third is winning in my book! And saying it's the kind of thing you wish you had written yourself makes me feel great. Thanks, Zak.

Well, this and this should be enough in terms of images. Seriously. If you like this blog enough to comment here, you should buy the book. You will like it or hate it the same way you like or hate it here.

Whoa, I actually won something! Goddamn! I feel almost bad sending an email saying what prize I want. I mean, I already have all this stuff from everyone else--what more could I need?

And then of course after thinking that I wrote up and sent off the email, because hey, free stuff. Keep up the writing of useful things, everyone.

@Paul KB: The European Teeth Thing is mainly vampire-related (if you take good care of your teeth, you're clearly a bloodsucking creature of the night. No idea what system you guys use over there... angst?) Its also worth pointing out that British candy is basically sugar-based crack.

Anyway, just use this sub-table if you roll the chalice (1d6):

1: Baby Teeth
2: Osmond Family Teeth
3: 70s Hammer Horror Cackling Gap-Toothed Hag Teeth
4: Vampire Fangs
5: Tooth of an immense great white shark, although you'll drop it when startled and no one will believe you later
6: Spellcheck error: Actually a chalice made of Thief

Zak- Please give us an update on the sales numbers (2k print run) on Vornheim after GenCon if you feel ok with doing so. I am curious how well it is doing. An expanded edition would not be a bad thing.

You might make more money with your dick, and the brushes, but there is a chance, in 20-30 years Vornheim and sons might be a greater legacy.

Hey Zak, is there any way you could post the Vornheim Communication Networks rules? The link appears to be dead.
Thanks.