What I Know About The World 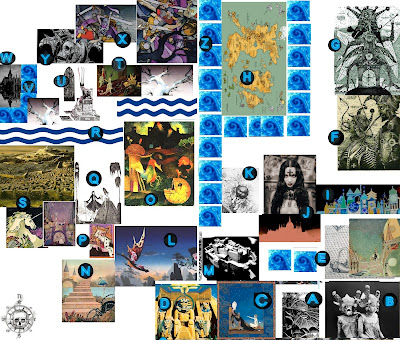 Cut'n'paste sketch map of known world in my current D&D campaign. ("sketch" as in a "rapidly executed piece of art not intended as a finished work". As in "this isn't a hexmap of the world, I don't need one for all this geography for my current campaign, may make one later"). Click to enlarge...

There should be a word for the certain kind of lust incited by seeing someone else's ideas. Simultaneous envy, admiration, greed, love, and loathing.

I love that you used Maiden's Powerslave for D.

Great inspirational stuff and this would be a very cool world, too. Would like to read the complete settingbook. :D

@lowlevelowl: the word "compersion" has been generalized to be considered "the opposite of jealousy". It has been co-opted from the polyamorist community. That is, in a polyamorist relationship of 3 people, it is compersion to see your first mate being happy/enjoying their own partner.

In this case, do you have compersion for Zak's rad map?

@ Kent: Haven't you realized by now that Zak has no purpose with anything he does except to confuse and annoy you? You know, like everyone else you don't like?

When I look at your maps Zak, they remind me of : this map . (I think you already posted it once, but anyway.) Suggestive, but full of information nonetheless. Much more interesting than most hexmaps.

Um, Kent, is it possible you just don't know how to engage this work on an emotional level?

Or, that you're merely unwilling to do so?

That would explain a lot.

Because I find it useful as all, hell. All those other people who like it, seem to feel the same way.

Or, maybe it's just a matter of your preferred sensibilities.

In which case, "For me..." would be far more accurate than "Zak would be better off..."

If someone made an attempt to assassinate my character (not the kind you play in an rpg, the other kind) and posted it publicly on their own blog, I wouldn't feel any obligation whatsoever to respond to anything they said, ever.

I like the location definitions; the resultant world is a little too bitty and busy for my taste, but I can see the attraction in setting all your games in the same place and there's certainly room for that here.

That said, I'm forced to concur with Kent that it would be at its most useful to me with a more conventional map showing the spatial, rather than conceptual relations between these territories. Plotting out movements between mood is nice but I also like to set some distances as I go.

I have a hard time reading the map in Vornheim. It's too jumbled up for me to easily identify and separate significant locations from each other.

But this map I find perfectly readable. Maybe because it's in colour, or because each picture is a different style, but everything seems distinct and easily identifiable here, and more inspiring than a terrain map, which characters will probably never see anyway.

Von - what is the benefit of that, really? As the DM, you just decide how hard/long (that was totally freudian, unfortunately) the trip between different areas is, and that's what it is. There isn't even any particular reason that the same trip has to take the same amount of time in the future.

So many people want to replicate some kind of "real world", but if you let go of that, something like this is much easier to use because there is no "real world" to equate it to. You want it to take 2 months of hard travel to go from Goblin-Land to Fairy-land, then that's how long it takes.

If you set specific distances, geographic features, mountain ranges, then you lose the flexibility to do what you want. This kind of map is an ideas framework that gives you space to improvise and flexibility to play the game without having to count hexes.

Lovers of detailed maps are better off with Alexis. That has it's own sort of OCD-charm, but I'd rather have a conceptual framework to riff off of than a massive tome I have to constantly refer too. Jazz vs Symphony, I suppose.

Funny how Zak can write "Here's a sketch map I've made", and some people read "Here's a map you should use, it will be useful to you, and if not you should tell me why".

Speaking only for myself, it would be the most useful to me, as the "sketch-map" Zak labeled it, with the collage and associated key providing information, inspiration and creating further depth, meaning and detail, while I apprehend and engage it as the work of art it is.

I'd probably then utilize the ocd-charm Wickedmurph mentioned and make some hexmaps, though I totally appreciate, as he said:

"This kind of map is an ideas framework that gives you space to improvise and flexibility to play the game without having to count hexes."

I've ran games in similar fashion, before, but I've got a hexmap fetish going on, right now.

One of Kent's comments is gone, so I removed my reply.

I think it works well as a characters basic understanding of the world. The lands of such and such as across the sea and not far from them to the south are the X Y Zs of PDQs.

They would not really know much else, but they do have a sense of a world they live in. This however is based on the assumption they were educated or schooled by the well traveled or well read.

This is, like I said and like people've pointed out, a sketch to get ideas down. It is not meant to be used as a functional map. I will make one of those later down the line.

I assumed that would be obvious but I suppose it's not.

Looks like Kent disappeared. I guess his metaphysical acuity was much higher than I thought.

Wow, this is the only campaign setting made by someone else I've wanted to run.

I prefer loose, improvisational play fueled by inspirational materials - precisely what the above delivers.

I will definately do something like this next time I dream up a setting.

You so totally got me with "Githyakified Egypt". Fuck yeah!

Been reading through the blog archive during the past couple of days. Just wanted to say it's been consistently entertaining and useful material.

Looks like a lot of fun ideas there. It kinda reminds me of the Dominions 3 nations and how they're all inspired by various mythologies, twisted up with some grimness and despair.

Damn this is all kinds of cool, Zak. Might I add that of all the gaming blogs I follow, I find yours usually the most useful and innovative in terms of how you approach the game and the elements you incorporate. Great stuff.

@Ronson - I wanted to leave a comment that ran to more than merely praise, one that indicated how I might choose to adapt this approach to suit my own perspective. Perhaps that wasn't as clear as it could have been? Or perhaps it's not the right sort of comment for this blog? 'Tis aw a muddle.


@Wickedmurph - In principle, I agree with you.

However, a foolish consistency is the hobgoblin of small minds, and minds plagued by hobgoblins make disruptive noises if the hobgoblins are roused. Many of the people I play games with are interested in the details of a fictional world remaining consistent and will kick up a fuss if said details don't.

Personally I would rather do the imaginative, freeform, vaguely-defined rules-light stuff, any day of the week, but ideology has to take second place to what will actually get a game going and keep it going. I would rather be playing games and having them run fairly harmoniously than sitting in my tower wanting to play something that none of my friends are interested in. Anything for a quiet life.


@Zak - I was rather under the impression that it was functional and that it functioned a bit like this: if I want to travel from Q to U, the map reminds you that I have to pass through S and R or O, R and T and that those territories are a bit like this.

The rest was all reflections on how I'd have to adjust that for the groups I play with: I apologise if you're not interested in hearing that sort of thing, or if I've committed some other act of douchery without realising it.

I sense no douchery from you. Just, when I read:

"it would be at its most useful to me with a more conventional map showing the spatial, rather than conceptual relations between these territories. Plotting out movements between mood is nice but I also like to set some distances as I go. "

I read that comment as implying you thought this was a final map, intended to be useful in play. Which it isn't.

It's just sort of notes for myself (and, once it's on the blog, it's for anybody interested to see what my notes look like). Like: this stuff is north of that stuff and is kind of in this mood, etc. etc.

It's a step toward a finished spatial map should a finished spatial hexmap become necessary. Like, right now it's entirely possible my players could spend the next 4 months on an island. I'm not going to bother to go and draw a hexmap I'll never use. On the other hand, if they are seized with wanderlust, I may have to get cracking.

A-ha! Well, I sort of did see it as useful in play, albeit behind the screen (although I do want to run a game in a world where that's how mapping works... somehow...), so that's a fair cop.

I could imagine simple "hacks" to this kind of map that would make it a passable equivalent of a wilderness map.

1-Show the PCs a map like this as not a real in-game map but as more the impressions their PCs have of various places they've never been. (Kind of like those maps of the US from New Yorker's point of view where the entire midwest is just corn)

2-Make notes on travel times in days between locations, giving at least two meaningfully different routes for each. i.e. D to C is 30 days the safe way (with lots of time for wilderness encounters) and 15 days the quick and dangerous way (with some famously terrible obstacle in the middle). So each space between locations is keyed with "route information".