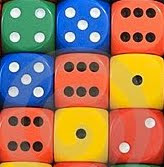 Here's a method for making buildings and rooms if you only know the kind of things you want in a certain place but don't know exactly the layout yet. Once you set the chart up, it's pretty fast.

Like, say, if you're making a town and have a list of locations but don't have time to detail each one right away.

Ok, so you get a handful of 6-sided dice.

Roll them all at once, then corral them together on the table so they're touching.

This is your layout. Each d6 represents one room. Lopsided layouts are ok with me if they're ok with you.

The numbers that come up are keyed to a table representing 6 kinds of rooms that are characteristic of that place, like, if its a castle:

So then you have a bunch of rooms. Not a lot of surprises so far.

These pairs of numbers represent doors and walls and what's behind them. You could make a table like:

That's 6+5+4+3+2+1 or 21 results. So basically you just need to think of 21 things that could be in rooms (including a helping of mundane results) and 6 types of rooms and you can generate buildings of a given type all day long.

Then, the only thing left is: on the edges of the cluster of dice there'll be numbers facing outward, touching nothing. This is the edge of the building. These can be handled as a simple table of 6 different things that could be there:

This is faster to customize than the instadungeon. Just write down a dozen or so ideas for each kind of place and you're ready to go.

You can even do this in the middle of a game right in front of the players. "What's it like? Hmmm...well you're in a monastery so....it's a storage cellar and...Oh, you've just walked in on a black mass. Roll initiative."

Also note that this method allows you to automatically make 3 categories of combinations: rare, common, and impossible. For example, in the castle above you could never have a "duel-in-progress" in a kitchen (3 can't be on top and on the side of the same die) and an archway is less common in a kitchen than in a great hall (archway requires a 1/3 and so the 3 will have to come from an adjacent die if there's a 3 on top is indicating kitchen.) Remember also that having a certain number on top means a certain number is on the bottom (7 minus top number = bottom number) and thus likewise unable to participate in combinations.

Maybe an example tomorrow if I have time.

Dammit Zak! Just when I don't think you could come up with another awesome handy idea.. bam there's another one!

I can see this being VERY handy for either on the fly or pre-game generation.

I'll definitely have to put this to good use in my Vornheim game!

Great idea and I was jonesing for innovative mechanics.

stuff like this is what can make it both simple and powerful, good catch.

"Dude, where do you keep your black masses?"

I want to make a version using a letter box from the Boggle game.

Neat! I'm going to try and make a wilderness version of this.