Cruel Consequences On The Isle of Oth

The top of this character sheet pretty much sums up what's going on. Click to enlarge..

-Set-up:
After sailing thither for no reason on the stolen-and-renamed HMS Tastycakes, the PCs are on the Isle of Oth which is a cursed island city full of people who can't leave: ancient exiled creatures who once offended the gods and the (very depressed) descendants of their servants.

It runs on a sort of democracy, they elect a new ruler every four years from among the heads of the most powerful factions on the island.

One of these heads happens to look exactly like Connie since it's her half-sister.

(Did you know Elf genes are ultradominant, so half-elf half-siblings on the elf side look almost like twins. Now you know.)

-Girls' plan: have sister win the election, kill the sister, replace her with Connie, get the Fourfold Alchemical Crown (worth humongous gp, 4 pieces of which are unlocked for the coronation and stay together for a year--pieces are lead separately, gold together), and therefore get mad xp and/or rule the island.

Winning the election requires gaining the support of the powerful and influential entities in the corrupt city (most of whom are, secretly, monsters of one kind or another). The electoral math is hardly Nate Silver territory, the smart money says: kill 3 of the entities or persuade 2 of them to support your guy and you win.

Persuasion generally requires agreeing to do D&D-type stuff for the entity in question.

-First session on island here: they shuttle around figuring shit out until Frankie just decides to up and kill somebody 'cause, hey, that's fun.

-Second session: on account of logistics and Mandy being sick (in real life), there is 0% overlap with players present during previous session. Leaves Connie and KK in charge, they promptly decide to find the entities known as The Lovers (arbitrarily chosen) and ace them. Which gets them down in a dungeon.

-Third session: Maxim Magazine comes over to photograph us for an upcoming feature. The idea is they take pictures while we play. So--in order to make the pictures look right--we play (with huge primary-colored bowls of kids-birthday-party snacks everywhere that most of the girls would never eat like giant cheezit balls and whatnot and someone telling me to sit up straight every ten seconds and everyone else topless and Mandy and Satine up on a big chair where they can't reach the dice and Kimberly having to keep a table leg strategically placed between the line of her ass and the camera).

(These are atypical and inconvenient conditions under which to attempt to master a dungeon, I tell you what.)

But basically we manage to get everybody in the same place and we get in a round or two of fighting with a giant centipede and a pair of rust monsters courtesy of Otherworld minis.

-So then now this session:
Kimberly and Connie in real life and Mandy and her brother (via Skype) down in the dungeon.

-Prepping to DM the Isle of Oth is hard. In addition to all the complexities of a city, several locations in it are effectively full dungeons, less than a session's travel from each other. Since none of these dungeons are fully detailed yet (and I lassitate to detail them, as I may never use them) it requires either constant improvisation or accurately guessing where the PCs will end up.

-Plus the players are unpredictable. As noted, for example, Team First Session and Team Second Session had zero overlap. And of course the girls were never what you'd call long-term-goal-oriented. Due to all this ADD&D complete changes in strategy or target are possible from session to session, and since nobody's trapped in this city, just up and leaving is totally always an option.

-Plus even besides that nobody can remember anything. Mandy has the best memory for plot details but also has massive migraines lately (and plays through them) so even her usually polydentlike grip on the ever-mutating plot is more tenuous. Recapping is no problem, but this makes the handle on possible strategies and options for dealing with the situation overall a little wiggly.

-This session specifically was actually mostly just everybody finishing hitting the centipede and rust monsters. It actually seemed to get more interesting as the rust monsters starting eating weapons and the tactics got weirder. Evan had a lot of fun pulling the rust monsters' tentacles out of their faces.

-Skype: Rather than use the Dragonsfoot dice-robot or other electronic means, KK and Connie just rolled Evan and Mandy's dice for them. This actually worked oddly well (from the DM p.o.v.) since--with four people--this meant at least half the party was doing something all the time. More and more I think: the ideal combat system would involve everybody rolling dice for one reason or another as often as possible. Preferably simultaneously.

-Mandatory Adult Interlude:
KK (putting the phone down): "I'm doing a gangbang!"
Z: "How many guys?"
KK: "4 guys!"
Z: "You look so happy"
KK: ""It's cool, I told them my dream team, my A-list of guys and she was like 'Oh they're all busy that day' but then she was like 'Hey that's a good idea' so she's rescheduling the whole thing. But then Mark (KK's agent) is like, 'Reschedule? I hate doing work, why didn't you just say you'd bang whoever they sent over, I mean if I as a woman I'd take every fucking cock in..."
Mandy: "Uh, Evan, is mom home?"
Evan: "Ummm...I don't think so."

-This thing happened: go down into the dungeon, fight, decide fighting in dungeon is hard, leave dungeon, get more supplies, ostensibly in order to return to same dungeon later. Totally typical of stereotypical Old School D&D-style play, this hardly ever happens with this group. They usually go in and stay in. Rust monsters, I guess. They spent a lot of time buying clubs and other nonmetallic things.

-(...while I walked the dog. So glad I threw this and this together. Speeds up the inevitable and constant rebuying of warpets and lamp oil.)

-The dungeon's built around and slowly spirals toward a deep, dark central pit. Into which Connie--a session or two ago--idly tossed a hypercube (#97 here) so I am as eager as they to see what's going on down there now.

-Speaking of gratuitous plot-hook-mitosis-on-account-of-Connie, she was then all "Hey, can we do that thing where we drink and then roll and then things happen and we get experience points?"

-Yes you can. Results:

Connie was set upon by two thieves, which wasn't much of an issue since everybody managed to kill them right after they showed up, however it was almost a disaster since, ok:

1-thief one backstabs Connie
2-thief two rifles through her stuff, stealing various items
3-DM, not trusting Connie to read off all items, takes character sheet and gingerly crosses unusual items off her sheet using a single line per item
4-Connie angrily blacks out items with sharpie...
5-...while friends rescue her and kill thief
6-Connie gets stuff back, realizes she no longer can tell what it was since she blacked it all out
7-Quoth DM: "Oh well"
(moral of story: you can drink, and your character can drink, but if you both drink at once, have someone keep an eye on your stuff)
8-After much squinting, Connie reconstructs lost items and reference numbers.

(Reference Numbers: I do this "You find a scroll of unknown origin, write #68 on your page" then when they use it I can look it up and don't have to remember from nowhere which mystery scroll Satine found at the bottom of a well a year ago based on a hasty transcription of an ad hoc description)

KK insulted a local person of rank...roll roll...turns out to be head of the local constabulary. Which in this context would be Connie's candidate-sister.

Mandy got arrested, failed her charisma check, and will probably be on trial for drunk and disorderly next session.

Connie fell in love with...roll roll...a succubus. Which, conveniently enough, there already is in Oth.

Evan got a disease which (roll roll realms of chaos)...made his legs really big. 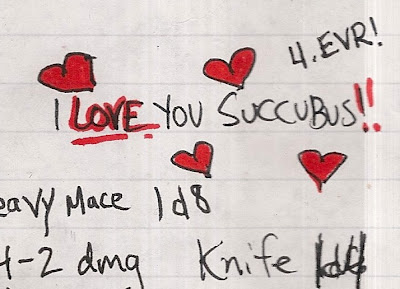 "After sailing hence for no reason..."

Dungeoneering as a tool for rigging elections is a nice hook, too, although I wonder whether yr. players will actually stay there for long enough to see it through. Your attraction to random tables and other means of instant generation is starting to make sense to me now.

There are probably some fascinating psychological profiling opportunities to be had in analysing the doodles on people's character sheets, too. Is anyone keeping a kill-count yet?

Great session report, Zak. I cracked up several times and am still smirking about Connie's "Can I get Drunk?" scenario. Rock it!

totally rewrote that sentence and meant to chance that to 'thither'. I will do that hence.

You know your craft well, Zak. Both the execution and the reporting. Very fun.

It would be awesome if, say, after winning the election she takes upon the curse and can't leave. Then the PCs have to on some quest to get a remove curse or perhaps make some deal with a demon to lift the curse, but they would owe him something when the time came, then leave that lingering over their heads until they forget and spring it on them later.

when can we expect to see the Maxim feature?

You said, "More and more I think: the ideal combat system would involve everybody rolling dice for one reason or another as often as possible. Preferably simultaneously."

I say please look in to Tunnels and Trolls as it does something like this. I am sure you can modhack it easily to suit your needs. Hell maybe Ken St. Andre will help you.

Normally being a player of superhero games, I've been surprised how much time just shopping you spend when playing D&D.

Also, love the Reference Number idea. Consider that one stolen.

@remial
Don't know. You'll hear about it here, though when it does happen.

have checked out T&T. may do it one day.

I just want to say, "you can drink, and your character can drink, but if you both drink at once, have someone keep an eye on your stuff" is going on the Official House Rules and Adventuring Tips sheet.