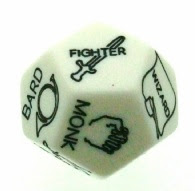 -Gary Gygax's birthday's coming up: July 27th. Meaning the Hack Vorheim Contest is almost over. Send in those hacks soon.

-Went down to comic con last minute (didn't expect to) with Satine for work (meetings with some people at One Of The Big 2 about maybe making something for them). Had fun at the Chessex table: didn't go in for all the shiny candy dice but did pick up: d8 result weather die, d8 random race die, d12 random class die (they make ad&d, 4e and 3.5 versions, so far as I can tell), a d12 random hit location die (not sure exactly what mechanics to use it with yet) and, most exciting, some blank dice. (This stuff mostly availble here, I think mostly. The actual Chessex site is useless.) Me and Connie and Cameraman Darren had fun writing our names on the d4 and playing "if-your-name-comes-up-you-have-to-tell-a-true-story".

-Did not buy the random monster die (1-in-12-chance of getting a dragon? mmmm...not so much) or the random trap die (tempting but it's too small--really hard to read)

Flash on a Segway. Slower than a normal man!

some guy told me out of nowhere "hey, you should grow half a moustache!"--I look at this guy:
nametag: Scott Shaw!. I go "Holy Hell! you taught me to read!"

"Hey, this is the artist I was telling you about"
Superman editor: "Your stuff is really great. If I put you on Superman they'd crucify me, but still--amazing work"

"Excuse me, is that a costume or are you actually hot?"

Con begins with me getting up at 6 so my friend can stand in line to buy a new Mattel toy and ends with Justine Jolie telling the Penthouse Pet of the Year to have sex with me.

-I decided that since having half the players skype in totally works in play, I can do something I never thought I'd be able to do with all these no-regular-scheduling-logic-known-to-mankind entertainment industry types: schedule gainm unilaterally whenever I want. No scrambling around each time we wanna play to see who has work and who has to flake. If you show, you show, and if you don't I have enough other people scattered around the country who play that we'll have at least 3 PCs rain or shine any day for any game. Very excited. Super excited.

When you say the big 2...do you mean the big 2 I think you mean? As in Marvel or DC? Or is this something RPG related? Sounds like a great time. I really can't stand the cosplay/dressing up shit...except the hot booth babes of course. As to those dice...damn...do want.

Hell yeah! Congrats man and good luck. I had aspirations of working in comics when I was younger, until I realized I'm a pretty shitty artist. Hope it works out for you.

the trick is getting them to pay me enough that it's actually worth not doing my gallery stuff for a few months. weirdly you get paid more the fewer people know who you are.

Just to go into total procrastinating and now freaking out undergraduate mode: is the deadline at a specific time on the 27th? I have a couple of tables I've been working on and I may not have time to finish them until Wednesday afternoon (Atlantic).

Best use of Body Part Dice: Roll twice when a critical hit is scored. If the same body part comes up twice, the character loses it for good!