This is just a post about cool things made by people who aren't me: 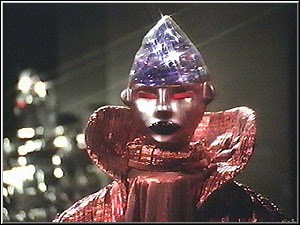 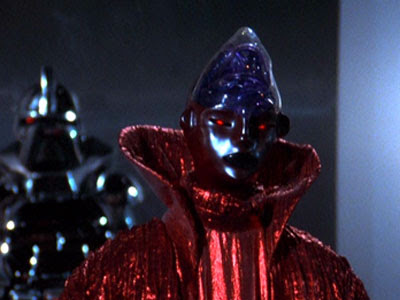 Now if you're thinking: oh why don't more things partake in the same delirious bad trip low-fi space-fantasy aesthetic, then check this:
The Outer Space Men
That link has some very interesting notes form the designer on how these things came about, plus other goodies like sketches and space-ships and toy-design history. 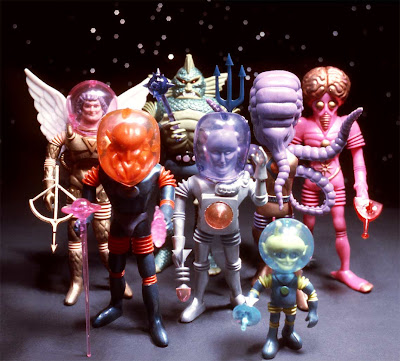 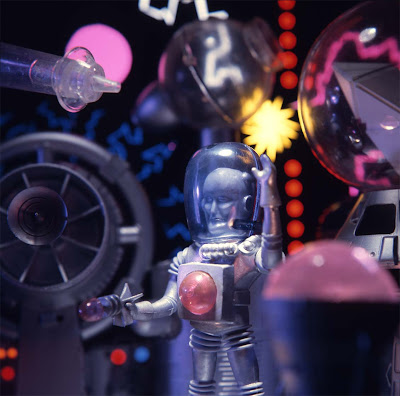 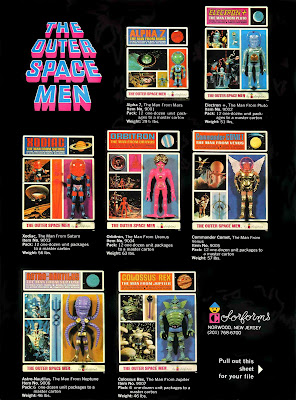 Last night I spent hours playing and then more hours at a bar talking about a game that is in the late beta stage called Lyssan. Here are some bits of it... 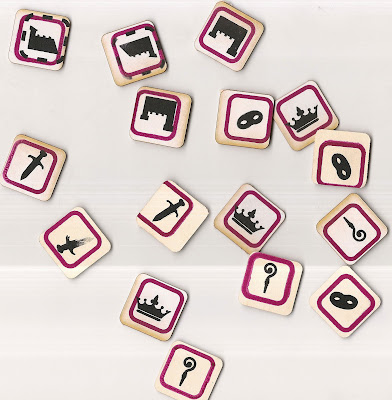 It's one of those hobby boardgames derived from German things like Settlers of Catan and the one with the wood and the wheat and all that--only not retarded. It's immensely complicated in a good way. It's like Risk for competitive brainiacs (like Small World? Kinda like that but with a gazillion more shoots and ladders). And it has all kinds of cool random mechanics so every game comes up different and clever. If you're into internecine politics, Rube Goldberg strategies and hexcrawl-domination and have 2 or 3 friends who think they're smarter than you I really recommend it.

The designer's running a Kickstarter campaign for it. And since I like it a lot (it's one of those games you lose and instantly want to play again) I hereby am recommending it to you and suggest you check it out and put the full weight of whatever my recommendingness carries with you behind it.

And last up here is a neat location for the Hack Vornheim contest entry courtesy of Dan Voyce who doesn't have his own blog so I am posting it here.

It's a little more "Monsters Everywhere" than I would personally use for a business on the street in Vornheim itself, but it's an interesting place. I could see it fitting nicely in the Vault of the Drow.
______
THE THEATRE AMPHISBAENA

The Theatre Amphisbaena is Vornheim’s most popular venue for reptile opera and outrageous stage shows – thanks mainly to a cadre of reptile men who somehow got the Regent’s blessing to live in the city. A carefully crafted aura of stylish danger pervades the place, only adding to its mystique. The stylish go there just to be seen, the elite use it as neutral ground and for scheming in the shadowed balconies. Countless strands of intrigue, destiny, and chance tangle here: There’s never just one thing going on.

Place it randomly on the Vornheim map. Scandals sometimes force the theatre to close and reopen elsewhere, so you can always move it later. The Amphisbaena prefers tawdry districts amidst taverns, bordellos, and drug dens. Even if the area wasn’t like this when the theatre arrived, within 2d6 weeks it has become so.

There are half a dozen reptile men based at the Amphisbaena (at least officially) plus medusas, nagas and other ophidian things. The remaining entertainers are a mix of commonplace and exotic races.

RANDOM EVENTS & COMPLICATIONS (1d20)
• PC mistaken for missing actor
• 1d6 thieves at work
• Old enemy takes seat next to a PC
• Master of Revels and his cronies burst in to shut the theatre down.
• Interesting meeting tonight… (Roll 1d8 twice to see who’s involved: 1 –villain PCs have met before; 2 –one of the party’s favourite contacts; 3 –random aristocrat; 4 –Eshrigel, 5 –One of Zorlac’s librarians; 6 –church dignitary; 7 –Duke Regent; 8 –random powerful monster)
• Band of drunken young nobles looking for trouble
• Satireveritas escapes
• Public accusation against PCs, resolved with Trial by Drama (Vornheim, p59)
• Fanatics attempt to bring “monstrous reptile men” to justice
• Tonight’s work has been banned but they’re doing it anyway (roll 1d4: 1 –Lampoons nobility, 2 –historical controversy, 3 –religious heresy, 4 –contains demonic ritual).
• Wronged citizen looking for reckoning with the reptile men (roll 1d6: 1 –weeping widow, 2 –cuckolded husband; 3 –blackmailed aristocrat; 4 –outraged priest; 5 –angry adventurers; 6 –someone influential [see option 5])
• One of the mimics has escaped into the cellarage. Well, hopefully it’s still in the cellarage. Could you subdue it for us?
• PCs spot a stage prop is really a dangerous magical item
• PC spots an Eye of Fate scurrying under nearby seat (Vornheim, p9)
• One of the foyer strumpets is a vampire
• Tonight’s show contains a random superstition or fate that afflicts many in the audience
• Random aristocrat woos the party, hoping to become their patron
• Ghosts are everywhere tonight
• Lost in the theatre is a snake whose skin holds a secret
• Tonight’s performance casts a random magical effect on the audience (Vornheim, p62)

LOCATIONS
The interior map may change (generate randomly, as per the citycrawl rules) but décor and basic features remain the same.

Foyer
This room is decorated with statues, men and women supposedly turned to stone by the resident medusas. Scantily-clad servants patrol with trays of drinks and sweetmeats (many will dally with visitors in a back room for the right price). Occasionally a reptile man or other notable mingles with arriving crowds to cause a stir.

A giant amphisbaena greets guests from a gilded cage, twin heads bantering suavely sibilant evil with a voice like wasp stings in honey. Their palindromic name is Satireveritas and they adore gossip and scandal – learning it, spreading it, instigating it. The serpent’s other priorities are general mischief and the seduction of beautiful women. Its not unpleasant musk pervades the room.

The theatre’s prices vary a lot depending on the night’s performance and the salaciousness of recent scandals:

There’s a 50% chance that tonight’s performance is Reptile Opera, the six most popular are currently:

• The Gods Against The Fools.
• The Hierophant and the Harlot’s Chorus
• The Paladin of Pentacles and the Queen of Wands
• The King and the Hanged Man
• The Hero with a Thousand Faces
• The Wise Man’s Journey To Hell

Otherwise roll 1d20 to see what’s on. Not every show is performed by reptile men, but they oversee everything:

Backstage
Sprawling over several floors are dressing rooms and storage cupboards; kitchens, living quarters and rooms for discreet assignations. Beyond this (behind various secret doors) is the domain of the reptile men: A snake-guarded, lightless maze of windowless rooms containing demonic pentacles, portals to jungle ziggurats, Cthulhoid angles, bottomless oubliettes …. Basically whatever villainy or plot the DM wants.

Cellarage
Open plan cellar packed with disused props: A labyrinth of paste crowns, sceptres and thrones; fake swords, banners, rocks and trees; collapsible tables, four-poster beds, and hundreds of colourful costumes. Trapdoors and mechanisms allow quick access to and from the stage above.

Further below are snake breeding pits, pens for a number of domesticated mimics that the reptile men use as guards, spies, and living props, and a very well guarded albino hydra whose regenerating flesh provides a never-ending supply of operas.

NAME
PROFESSION
SECRETS & PLOTS
1
Cirac Papandreou
Suave and creepy reptile man. Unflappable. Masterful performer.
Coolly juggling the blackmail of 1d100 local aristocrats. Would you like a favour?
2
Jasna Prada
Megalomaniac Prima Donna never without a coterie of admirers, toadies, hangers on and other parasites.
Terrified of reptile men but wishes to undermine them “for the good of humanity”
3
Kamen Zlověstni
Human opera singer with a stylised serpent’s face tattooed over his own.
Devotee of reptile opera, seeking to transform himself into a reptile man.
4
Kasper Meguro
Brilliant but eccentric method actor. Insists on staying in character at all times.
Secretly a doppelganger/shapeshifter. Real one is kept locked away.
5
Coburn Palookas
Blustering but friendly old thespian (hammier than a butcher’s shop).
Waiting patiently for the Man With The Jewelled Violet Eye… then revenge at last!
6
Seamus Zelazny
Special effects expert. Master of flash powder, stage magic, alchemical lighting etc.
Moonlights as a gigolo/courtesan. Is in over their head with 1d6 psychotic aristocrats
7
Goth Zocchi
Sinister harlequin. Speaks of himself in the third person.
Genie in human guise. Instigates and advances Chaos in all its forms.
8
Ophelia Sweet
Precocious singer and dancer/acrobat.
Kleptomaniac, addicted to the adrenalin rush. Moonlights as a daring thief.
9
Goshen Mernik
Irascible bombastic womanising high-functioning alcoholic. Flawless on stage.
Looking for an opportunity to go out in a blaze of glory.
10
Violet Pavane
Musician.
Secretly untalented, uses magic to hide it. Always wants more.
11
Mullen Poag
Stagehand/Roustabout
Agent of rival theatre here to spy and sabotage.
12
Cena Batista
Snake dancer/handler
Locked in bafflingly esoteric bloodless duel with rival reptile man.
13
Abner Dysart
Bit Part Actor.
Blackmailed by the Master of Revels, looking for evidence to get the theatre shut down.
14
Zampanò
Disturbingly intense child prodigy.
Being stalked by obsessive noble.
15
Unger Zdunich
Gothic necromancer.
Has a cursed item they’re desperate to be rid of.
16
Simon Sevenarms
Juggler/acrobat. Magically created multi-armed half man, half spider monkey.
Totally insane in private. Wants to release the theatre’s hydra.
17
Pulchus Grome
Larger than life ogre tenor.
Shortly to be killed and used by The Chain (Vornheim, p8). Roll 1d3: Target is… 1) in audience, 2) in cast, 3) the PCs.
18
Aulis Iago
Magician. Knows genuine magic but pretends its all stagecraft and misdirection.
Fallen into the clutches of local witches (Vornheim, p8). Being forced to do terrible things for their amusement.
19
Sanguine Sekushi
Elegant medusa dancer-courtesan.
Planning to launch challenge for control of the theatre during its next opera.
20
Jagga Tupu
Naga oracle.
Demons occasionally torment her dreams until she commits a wicked act.

Yes! Lucifer, or what do they call 'em, the IL series. I've got a couple of pictures in a folder somewhere; I haven't used them but if the opportunity arises, bam. Glitterspace? Sure!