The Pale Eye Of Tiamat 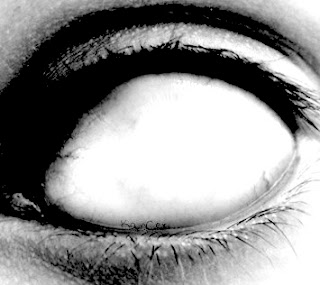 The Pale Eye Church is one of the five Tributary Temples of the Church of Tiamat (see also: The Red Hand, The Black Wing, The Jade Fang, the Cobalt Claw)--its color is white, the color of inertia, the moon, the bleached, the immobility of eggs, abstract time, unfulfilled potential. 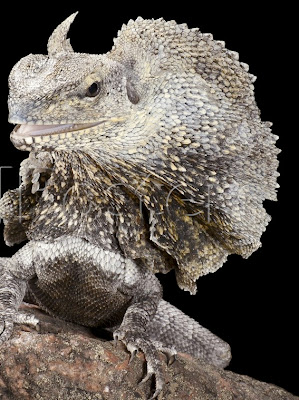 The Eye's central tenet is that nothing exists. All is simply a mist of undifferentiated pre-matter and shadow, awaiting the true existence which will emerge when Her Gleaming once more sleeps. The Cult of the Eye is skeptical, apathetic, humble and, from the outside, monstrously capricious.

The Pale Eye cult is strongest in the Wastes, where the Negatsar acts as Archbishop of the Eye--wielding both spiritual and temporal power. 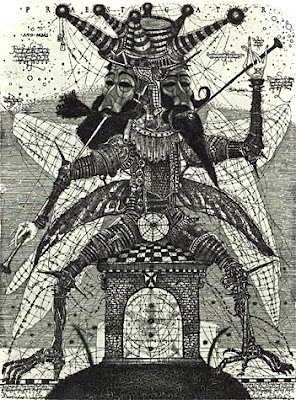 MORNING WITH THE NEGATSAR, (A sidebar by Cole L.)(rumbling) IT IS CALENDRICAL. AWAKE Attentiveness Plausible HECATON CONFIGURATION : I AM THE FATHER. I AM TIME. Patience FROM MY MOUTH THE EGG. THE EGG IS TIME. FROM TIME A VOICE. THE VOICE IS WITHIN THE EGG.
ACCESSING FUTURE MEMORY (sound of stone scraping) DELEGATION AS EXPECTED. STAY THE DOG AND BROOM : Time Allotment redacted
(escorted by utterly armored and fur-cloaked warriors, an assembly of hooded monks bring forth a human sized egg on an ornate litter. the egg is struck with a platinum hammer. there is a chime of sublime purity, followed by three phased echoes. the egg cracks. from the egg spills a flood of tar, containing a nude, twitching figure.)
FROM THE EGG, SLOWNESS. THE SLOWNESS IS TIME. FROM TIME, A CHILD: ЇАЊОС́. THE CHILD IS THE FUTURE. Time Offset redacted

Among the Negatsar's many subjects, the most devoted to the Path are the White Orcs. Male orcs you see around a lot, in movies and whatnot--these are like them only pastier. Female white orcs look like this:
...except when they open their mouths to deliver their level-draining bite in which case they look like this: 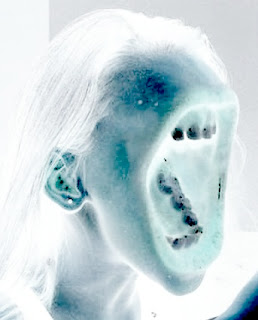 The Pale Eye's principal activity is the repatriation of objects. No item or atom originating in the land of the Pale Eye is suffered to leave. Endless expeditionary forces, carrying arrows made only from foreign ash, endlessly seek long-lost drums, scrolls, coins, pack animals, and the bones of previous expeditionary forces.

The Eye's Sacrament holds I will keep for Her a nest in bone, A place of cold unchanging --and this is the core of the Gospel of the Waste. Each object in its first position, each lost citizen replaced by another of precisely equal training, genetic makeup, gender. When all is as it was, She will lay Her five heads to rest, and dream the next and actual world. 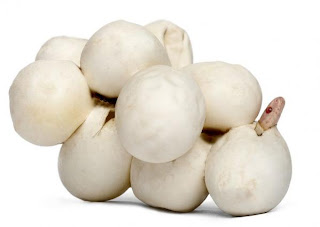 Creatures of the Pale Eye include:

1. The Pale Knight
2. Baron Vorgus, Demilich of Cobalt Reach
3. The Pirate Queen Ching Shih
4. The vampires of Nephlidia (they teach the Gospel of Slime) and Annwn (they teach the Gospel of the Uncreator)
5. The Glassilisk
6. The Time Elementals
7. Albino reptiles, lizard men and reptile women
8. The Beholder and Eye of the Deep
9. The Gibbering Mouther
10. The Eye of Dread
11. The Sublunary Men
12. The Tirapheg 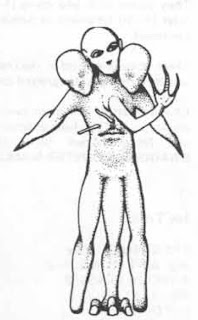 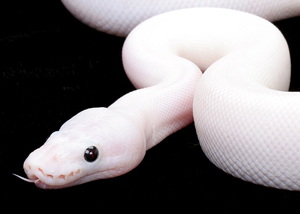 It Is Currently Known To Be Seeking:

1. A large gem last seen in the Palace of the Hex King
2. The bones and regalia of an anti-paladin sent to reclaim it
3. The Book of Vile Darkness
4. The document of White Wedding And Beginning Again, signed by parties unknown
5. Arms and equipment of a female white orc raiding party
6. A Nephilidian known as Scorn
7. A first edition of Pride And Catastrophic Deterioration by Seena Jaunt
8. A packet of ghost eye cigarettes 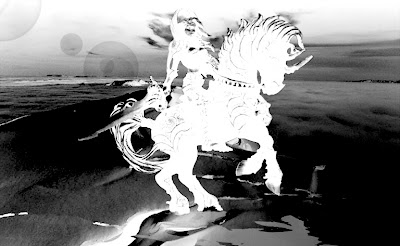 To generate a party of White Orcs, roll one of each die (a lot easier with a pop-o-matic bubble): 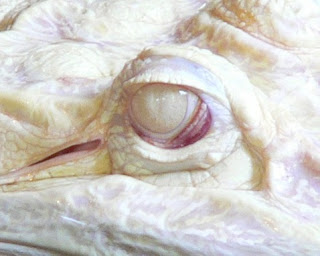 Are you making a book for your setting other than just the city? If you are that would be cool.

This is GOLD. You've really been on a roll lately.

The Drownesia material needs a LotFP hardcover, with a cover of imitation snakeskin.

There is a continent in the pipeline.