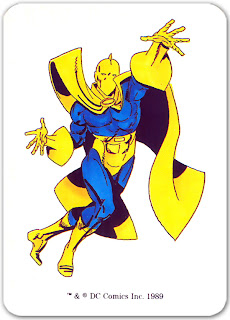 -Omni-gadgets. Gadgeteer superheroes could spend points to get an "Omni-gadget" with a certain number of power ranks (like, say "7") and they could do anything so long as the powers it emulated had that number of ranks. So like a flashlight might have "Light: 6, Armor: 1". Better than having to buy everything in the utility belt separately. So somebody might have 3 rank 5 omni-gadgets. Seems like a mechanic you could re-use with a little tweaking for certain kinds of sci-fi games.

-Rather than charges, gadgets had "reliability numbers". Roll below the number any time while using it and the thing runs out of juice. Maybe not ideal for superhero stuff where jamming is uncommon, but a decent mechanic. BRP/Cthulhu has a similar mechanic for jamming weapons I do believe. If I were writing a superhero RPG I'd say having a reliability number might buy you the ability to get bonuses elsewhere, like weaknesses usually do in point-build RPGs. Seems like a generally useful 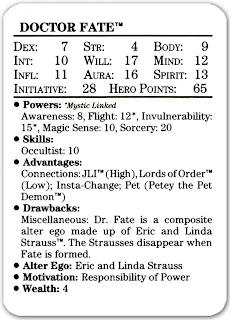 substitute for bookkeeping for things like magic items, food supplies, etc.--taking a routine roll you'd be making anyway and just remembering that if you roll low, things have gone awry.

-Dumb Luck. This was a superpower where you could pretty much get anything to go your way if you rolled well against your power rank. Ambush Bug had it in spades, if I remember.

-The way they did martial arts (which I talked about before).

I really wanted to play a superhero game, so when my group got tired of 4e dnd I bought us copies of villains and vigilantes. Its such a change but really enjoyable for us.

The randomness can give you some interesting results but if you really want a conceptional character you can make just about anything.

Oh, yeah DC Superheroes was an awesome supers game; easy to understand, and once you got used to the two tables utilized for action/resolution: pretty quick.(Like any other
This game should have been republished, as DC owns the rights to the system AND setting. Instead, they decided to allow Green Ronin to license it. True20 fans, rejoice. Except for the sourcebook delays...

Anyone interested in this game can track down copies in the usual places; it was quite successful in its day. The supplementals were well-written and informative, imo. Especially the 1st edition Superman Sourcebook, with its wealth of Pre-Crisis Superman lore.

Special bargain : there are good copies of the Batman Roleplaying Game, effectively DC Supes 2nd Edition Lite, going for cheap on the net: $5.00 or so. Not so affordable or available is the Blood of Heroes Game by Pulsar Games(said company now defunct after trying to sort out legalities regarding who actually owned the MEGS system, though Mayfair sold it to them!), an unofficial 3.5 version, if you will.

On the raft of stats:
Yep, but there was method to the madness; you could quantify and cross-reference them with the Action?Result Table pretty easily. Though some quibble with the names of the attributes, definitions, and the sheer number of them, it did work pretty well.

On Omni-'s:
Omnipower for the win! You can do anything with it.

Other good supers games were out there: Villains and Vigilantes(now in new edition, with its original creator, Jeff Dee, back in charge!), Golden Heroes(now Squadron UK, available again, with free rules..), and Marvel Superheroes(now free on the web and with a retroclone: 4C), but this one was my personal fave. There are in fact still active players, the yahoo group has thousands of posts... Good to see, imo.

I never played this game but I picked it up off a friend who was selling it of in a move. The only thing that bothers me is the resolution chart. I cringe over tables being required for resolution though it usually depends on how memorizable the table is.

The set I bought included both the Pre and Post crisis versions of the game as well as the Batman Specific iteration. Do you have a preference?

@DarkTouch:
Pre/Post Crisis Versions of DC Superheroes:
Only Mayfair's 1st Edition was Pre-Cresis:
2nd Edition, the Batman Roleplaying Game(contemporaneous with Second, and mostly a move to cash in with that year's Batman[1989] movie), and 3rd edition are all Post-Crisis. West End Games also made one in 1999 called The DC Universe RPG, which of course, was Post-Crisis(And Post Zero-Hour, as well.).

Charts:
Take a look at the intro chapter in the Batman Game, it'll help you decide whether or not the mechanics will work for you. I found it to be pretty smooth in play, YMMV.

The box I got was basically his entire collection, all editions. It even included the Watchmen Supplement which I'm told is hard to get. It has basically been sitting with my Dr. Who RPG until I try to figure out what to do with them.

Spirit of the Century has a similar set of rules for gadget-based characters. It does a great job of duplicating something like Batman's utility belt. SotC also has great invention rules for playing someone like Mr. Fantastic, I find.

I like what I've seen of SOTC. Not all of it would translate to the way I'd want superheroes to roll, but it definitely has nice bits

Yeah, it's a particular take on "heroes" and not exactly meant for supers. We did a campaign set in an alternate 1860s U.S. that was kind of a gritty supers. It worked well for that - the adversaries were The Unknown Soldier, a nigh-unkillable Confederate soldier raised from the dead, and a genius industrialist who won the war for the North with his phlogiston devices. The rules for minions makes for some great comic action.