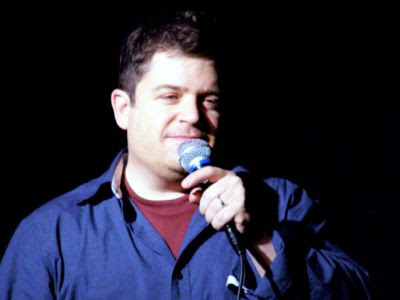 So I went to Patton Oswalt's reading for his new book. Patton read his book. It was funny. Then there was a Q&A. Questions were asked, answers were given.

Patton Oswalt:
Any other questions...?

Zak:
When was the last time you played Dungeons & Dragons, and who with?

Patton:
It was about a year ago with..(and then he points to the friends in the corner of the bookstore that he has been giving shout-outs to all night, only this time they look a little embarrassed)...we had a little mid-life crisis, we started playing old school, Monster Manual, Deities & Demigods Dungeons (points to friend) you were an elf, right? And I was a drunken dwarf. And I played a drunken dwarf. There's an epic poem about the character I played in high school on my book. Or several characters. They kept dying. Do you guys play?

Patton:
Who are your players?

Patton:
Oh of course. "Oh my god I need to escape this afternoon. Take me away green slime." Who's the DM?

Mandy:
He is, but I just started DMing.

Patton:
What do you play? Like what's your character?

Patton:
(now he makes the joke about how does everybody have a high charisma but it does it in an ironic self-mocking I-know-this-is-dumb way so it's ok.)

Zak:
Yeah, sometimes, the girls don't seem to grasp the idea that charisma is a dump stat.

Mandy:
I have a low charisma but I just said it's because I'm obnoxious but really hot.

Patton:
So it's like a Kardashian thing, right? Like I wish she didn't talk. Yeah, it's weird people don't realize charisma is totally a dump stat because it's like...

Zak:
(to audience) I'm sorry I ruined this for everyone.

Patton:
Oh yeah, I was about to disappear down a K-hole there. Alright, are there any other questions?


_______
Addendum: This is what we call an anecdote. The point of it is not to seriously discuss the use of the charisma stat or any other game mechanic. Those attempting to go that way should be aware that they run a severe risk of sounding like Comic Book Guy.

Of course you realise that the clock is now ticking, counting down to that time when you do a show, and you do a Q&A -- although that's probably not the kind of thing that happens at art shows, I'm not sure -- and someone asks about D&D. ;)

@kelvingreen
I remember doing a lecture or a reading or something and someone asked about "axe". I can't remember what it was.

@Zak S
@Mandy
The Show:
This is epic. Love it. You probably shouldn't steal the show like that, though. It's the man's day job! :-D

D&D and 'celebrity':
Hey, Vin Diesel talks about D&D at every opportunity. So, the Art Show deal was unsurprising. Just shows the reach of the IntarWebz, I'd say. Prepare for more D&D Art Shows!

Charisma is the *core* stat for my holy spy-master. Who needs Constitution or Strength, when your enemies are too busy hitting each other?

It helps that the GM is good at mixing the rules with the roleplaying in determining results. And that I haven't tried to play the other players . . . yet. (That was other characters, and in the interests of avoiding the precipice of that K-hole, I'll stop here . . . )

Zak: Yeah, sometimes, the girls don't seem to grasp the idea that charisma is a dump stat.

Blasphemy! High Charisma allows you to have lots and lots of minions who you can throw into harm's way to die in hilarious fashion. Then you march to glorious victory over their heaped corpses.

"You cannot defeat me! I command myriads of tiny men! We will clog the rivers with our dead!!!"

Whether charisma is a dump stat or not depends on your play style. Of course, if you're using henchmen that heavily, you're also probably rolling 3d6 in order.

Sounds like you had a fun night out, Zak. I'll have to check-out Patton's new book.

Sounds like the best part of the Q&A really.

I like to think there are no dump stats. That all stats, if they really try, can make a difference. Otherwise, yeah, Cha is useless.

Lol awesome. Wish I could have been there!

For the Pathfinder game I'm playing in my Half-Orc Paladin uses Charisma as a dump stat... as in I dump everything I can in order to increase it.

Sorry you stopped that conversation, I would have enjoyed hearing more.

I am ready to fistfight someone over Charisma RIGHT NOW.

@Zak S:
I know, right?
I've been kickin' around the 'Net' since back around when Compuserve was relevant, and I still haven't got used to this!

So...
Vornheim, Gigacrawler, TMNT, funny observations about (not-so)every-day life and other trenchant stuff...

Oh yeah,
Your superhero rules are quite good; you should name it or something.

His book is called Zombie Spaceship Wasteland. There are like two chapters about D&D. (I haven't read his book yet but did flip through it.)
I don't think you were really derailing the Q&A from the sound of things. But it is very rare in my experience for people to recognize they are hogging Q time and to yield to other questioners and you should pat yourself on the back for that.

So, if Charisma is Mandy's dump stat, what's her most favoured stat?

did they get rid of the Comeliness stat introduced in Unearthed Arcana?

@unearthedarcana:
Yep, it disappeared in 1989's 2nd Edition!(Along with Half-Orcs, Assassins, Barbarians, Cavaliers, Thief-Acrobats, and the names Demon and Devil for Abyssal/Hellish creatures[they came back like 10 mins. later!], and probably more, but those were the biggies that I remember!)IIRC, the later(1995 or so.)Player
s Option: Skills and Powers broke down the prime stats into pairs (sub-abilities); one of Charisma's was Appearance.(The Other was leadership.) It was a fun time to be a D&D fan!