If I Was Trapped On A Desert Island With Only One Letter of the Monster- Alphabet To Eat, I'd Choose "B"

I'm still perusing the original Monster Manual. I have absolutely no overarching thesis regarding monsters that start with the letter "B". I'll start writing anyway...

Count among the appreciated innovations of later editions that all the regular animals were stuck at the back.

While Gygaxian science acknowledges that badgers come in both normal size and "giant" ("twice the size of the normal sort"! Seriously, what does one hope to accomplish by fighting a twice-normal-sized badger?), baboons come only in "normal" and beavers come only in "giant". No comment.

Largest land mammal known. Except in D&D because D&D has storm giants. Which pretty much eliminates the only cool thing about the Baluchitherium.

Now the basilisk is a fine and excellent monster. And it's fun to say.

My big thing with the basilisk is determining whether to do it as a sort of dragon-plus-a-whole-extra-screw-you or whether it's some creepy little lizard that just happens to be able to make you into rocks. I tend to prefer the second, since then when a real dragon comes around it hasn't been diluted.

The other nice thing about the basilisk (along with the chimera and the cockatrice) is it offers a window onto the total lunacy of the western mind--Pliny said it smelled so bad it broke stones, Theophilus Presbyter said you could use one to turn copper into spanish gold, and Leonardo Da Vinci said the basilisk was so cruel that when it couldn't find an animal to kill, it would turn its gaze on plants and herbs instead. He also painted.

According to Wikipedia (or whatever drunk ESOL student was typing into it this morning) "its weakness is in the odour of the weasel".

Back in the Monster Manual--did you know that while the medusa's gaze works exactly the same on the astral and ethereal planes, the basilisk's gaze kills you in the astral plane and, in the ethereal plane it "turns victims to ethereal stone which can only be seen by those who are in that plane or can see ethereal objects"? This must have come up in the Lake Geneva campaigns. Which is weird considering how, apparently, things like "Can a wizard just not fit into a suit of armor or what, Gary?" never did.

Also, one of the few monsters whose endless D&D variants are actually cool and not redundant.

There are six types of giant beetles, one of which is "boring", and all of which are boring.

My only problem with beholders is PCs tend to die way before they are awesome enough to fight them. And no, I do not want to hear your clever excuse to trot one out early. A beholder is like a fine wine--like the pure concentrated essence of all that was good and original in Gary Gygax. Weird--but not merely whimsical, alien--but still primal, pure evil--but in a freakish way, pulpy--but not how Lovecraft would've done it. How many other spheres do you know that are "hateful, aggressive, and avaricious"? It seems so petty that a floating ball with a built-in disintegrator ray would bother with being greedy.

Personally I prefer evil goo to be white, clear, transparent or yellowish. Probably because it seems way grosser that way.

My friends in New York want me to move back so we can have a doom metal band called "black pudding".

Dogs are either cartoony domestic pets or they are there to remind us of our bodies--drooling, biting, growling. The point of dogs--death dog, war dog, devil dog, hounds--any kind of dog--is their physicality. Their heaviness and hungriness and hairiness. The blink dog's abilities go completely against this natural human association--so they just remind you of Bewitched. I'm sure some macho DM has horror stories of PCs devoured by the terrifying game-mechanical efficiency of slavering packs of blink Rottweilers, but these men have no poetry in their souls.

I just now went to the fridge and had a piece of chicken and invented Inevitable Dogs. They appear right behind you if, and only if, you turn your back on them. Suppose it's not quite as terrifying if it's a Corgi.

It burrows into your mind. But, unfortunately, only metaphorically. This close to being a good idea.

It can be hard to tell fairie folk apart--here's a flow chart for DMs:
Is it plausibly heterosexual?
Yes.
Do you want your PCs to expect it to give them wishes?
No.
Then what you want there is a brownie.

Also, considering that the B's contain not only the brownie and the black pudding but the bull, boar, buffalo and giant beaver, it's by far the section of the alphabet containing the tastiest monsters.

To those familar with the D&D-evil-humanoid-fireball-fodder scale (kobold-goblin-orc-hobgoblin-gnoll-bugbear), the word "bugbear" conjures an image of Maurice Sendak-beasts that hate you. To those who aren't (like my players) it just sounds dumb. I feel like there's a possible place for the bugbear in the "shapeless things that the superstitious townsfolk won't shut up about but which turn out to be symptoms of something much much worse" niche. "Ach! Fear the Blackbriar Woods, for they harbor the bugbear, the jabberwock and the Great Blue Grampus!" 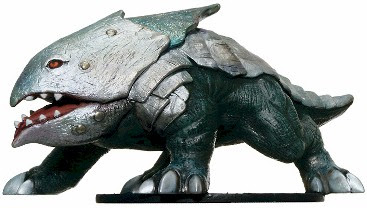 Among non-Monster Manual "B" monsters, only two catch my attention:

Giant bats, bonebats, firebats, ice bats, rabid bats, bats with hypnotic eyes. Pretty much whatever works with bats. Problem for DMs is, you get one kind of bat, one kind of snake, and one kind of spider and then you don't use any of them again for, like, eight months at least. If you're always building on the classic chassis it'll make you lazy.

I talked about these frogs that blind you already. What I failed to mention there is I really like saying "The Blindheim!" in a sort of evil-scientist/skeksi voice. And I've never used one in a game or, as far as I can remember, ever had a real-life conversation about one, so I've only ever done this when I was alone. Which is a little creepy, I guess.

I thought the blindheim was in the Fiend Folio.

Yep, freaky lizard basilisks all the way, I say. Also, that line about the weasel is almost poetry.

I happen to be of the school of thought that says dragon-- giant lizard, fights you-- is boring & not particularly scary. Me, I want my dragons to be super weird, so I vote basilisk option one.

The Inevitable Dog sounds like it would make a great pet for Chun the Unavoidable.

Largest land mammal known. Except in D&D because D&D has storm giants. Which pretty much eliminates the only cool thing about the Baluchitherium.

Put a cottage on top and small folk can roll around Jawa sandcrawler style. That's how merchant halflings operate in my campaign.

So, where your eyes don't go an inevitable dog wags his tail and does a parody of each visceral thing you do? I just confused myself.

I dare you to put a "yellowish-white goo" in a game sometime.

I'm sure someone pointed it out already, but...

..Bulette is slang here in north-germany for hamburger or meatball. Hence I was never able to take these things seriously...

Did I ever tell you about the time I met a dryad with a giant beaver? This was back in the 70's.

I love you comment about "do I want to see a knight hit it?" that is EXACTLY what I do when picking monsters.

Visualization of what a physical or magical confrontation with them is essential to how well I can use them. How can I describe combat with them quickly, flavorfully, and plausably.

Crypt Things are not undeads. Therein lies their charm.

The thing about the bulette that makes me chuckle all the time is that the term (I think even with the same spelling) means meatball in German...and since I live in Germany and play D&D with Germans, I will never ever let them encounter a Bulette, we have enough laughs as it is, no need to introduce more metagame ridicule...

But what if I have a really, really good excuse for trotting out a beholder early?

The PCs are mad eyes on a beholder, dreaming of escape, dreaming of being Heroes and growing up to kill their hated host so they may fly free and adventure?