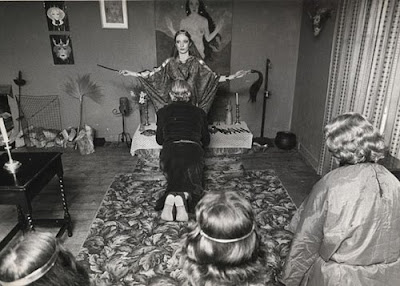 As I explained yesterday, most of what the Monster Manuals give you, in terms of imaginative fuel with the Demons and Devils, is the pictures.

In later years, mythology accreted around these guys, but it didn't really seem to "take" in the way that it did in other games--probably because it wasn't there from the beginning--at least not for people I know.

So in visiting the Devils in this here monster-by-monster review of D&D, we are mostly visiting their pictures. 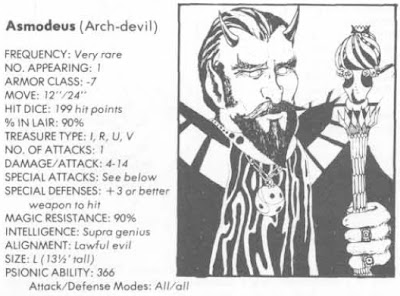 I can actually imagine, one day, the PCs strapping on their winged boots and pulling out their +18 lightning knives and girding their loins and actually marching forth to do fierce battle unto Orcus, but the idea of actually fighting Asmodeus just seems stupid. "He is physically stronger than any other devil (as strong as a storm giant)" yeah, I bet he says that to all the girls, right before he doses them with brown acid. 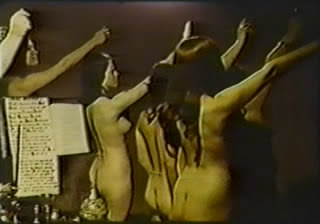 Since he had the most hit points, in later editions, they made him all red and shiny and decided he just looked like The Devil, which seems like kind of a shame. 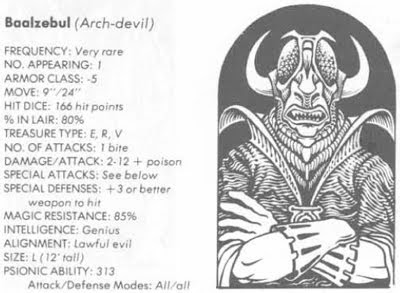 I remember this review of the Dario Argento movie Suspiria that said something like "This movie is like what you thought horror movies were like when you were too young to get in to see them."

Beelzebul's picture reminds me of the cover of some '60s Penguin Sci-Fi novel that you'd pick up and imagine as being intensely fucked and mindbending and then it'd turn out to be about some guy on a space ship with a love interest.

I imagine Beelzebul's realm as a cruel David Hargrave/Early Monster Magnet skriekrealm of green glass windows and hallways that curve like the wrinkles in you brain and echoes that walk like men.

Later editions totally abandoned this "symmeterical freak in bug hat" look for Beelzebul, but did apparently keep "The most disturbing thing you can come up with before the Fed Ex deadline on Friday" as the artist's brief for designing him so I'm good with that. There's room for translucent slug-lords on the ceiling of my psychedelic nightmare palace. 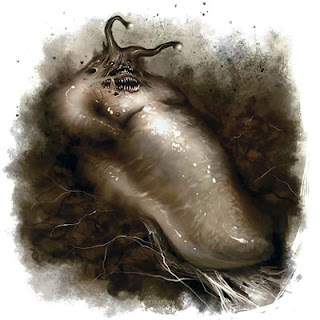 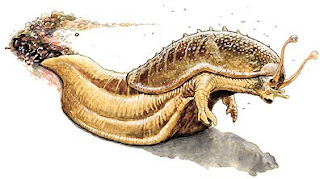 You know these guys--they wallow in flame and mock you as you suffer. Even Hell needs scenery, and since it's D&D, the scenery needs stats.

You want to put a scorpion tail on a skeleton and call it a devil? Fine. Clearly I'm in a generous mood today. I'd use one of these in a game, no problem. "I turn it" "No you don't".

The giant fish hook, though? Really?

Debuting in D&D 2.0, these guys look like mummies only with chains instead of bandages. A little more Hellraisery than the original Monster Manual devils, but I like them ok. And the girls pretty much like anything with S&M overtones. So, yeah, maybe I'll try to kill them with a chain devil at some point.

Does Asmodeus, Lord of The Nine Hells really need to be scalable? Dispater is useless.

The furies--not unlike the succubi--are really a whole adventure seed implied in a monster. Break an oath, commit a foul deed, and hence they come--to ensnare and to slay. Rock.

The original Greek Geryon had one head attached to three bodies, so if you wanted to make a Geryon that wasn't boring that's where I'd start. 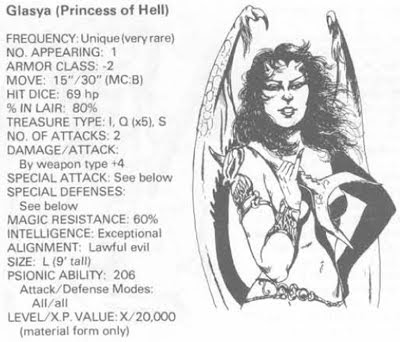 The only interesting devil to appear in Monster Manual 2. Despite her problematic nose and even without the "69 hit points", it's not hard to figure out the point of Glasya. You can check that Jungian archtype off the list, guys.

Pit fiend lite. Snore. Are we at the dinosaurs yet? 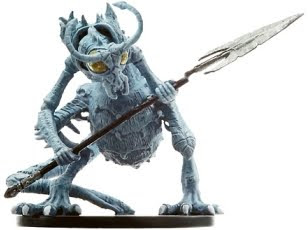 Creepy polar insect-men are go! I can see them very clearly, emerging out of a blizzard in a godforsaken landmarkless land, yellow eyes gleaming unnaturally against the slate-grey sky, their alien faces squirming with inscrutable hunger. (Also, they just made me remember I like the Chasme, or Demon Fly--which should've been in yesterdy's entry.)

Lemures can become wraiths or spectres whereas Manes can turn into shadows or ghosts. Got it? There must be some German compound word for "an idea which is identical to some other idea only there were two different words for it so Gary Gygax conveniently used the concept of 'alignment' to separate them and make the Monster Manual twice as long". Kervonschtensynonymschplittenkonzept or something.

By this time in the Monster Manual, you've already read through Balor, Barbed and

Malebranche and then you get to Pit Fiend and you're like, ok, I get it: horns, tails, pointy things, they are Fiends from the Pit. Interesting tidbit however--cover up the upper half of the Pit Fiend picture and there's a whole other monster there.

"...green glass windows and hallways that curve like the wrinkles in you brain and echoes that walk like men."

That is so fucking metal. Nice job.

and of course I can't find the passage. :P

Anyway I remember the last part...when describing certain supernatural beings or creatures, Ars Magica states three examples...while I can never recall the first, the second two are, "Men who are not men and Men who do not know the hearts or shapes of beasts."

Does Asmodeus, Lord of The Nine Hells really need to be scalable? Dispater is useless."

The Geryon they went with was the one from Dante's Inferno. While, yeah, a three-bodied guy would have been cooler, Geryon is my favorite devil from Dante. So I still love him.

We, some germans, started a quest for the right german word for "an idea which is identical to some other idea only there were two different words for it so Gary Gygax conveniently used the concept of 'alignment' to separate them and make the Monster Manual twice as long" here:

So far we came up with

I saw someone else say this on the other thread, & I agree; I think the mythology DID accrete to these guys...it just happened in Planescape. I've always had a fondness for Planescape being the place where the weirdest bits of DnD don't seem out of place. "I planeshift to Heaven at the end of the encounter & sleep in my fluffy angel feather bed." Okay, fair enough.

The giant fish hook, though? Really?

The Pit Fiend also wins the award for the biggest, rubberiest, jumbo pencil eraser nipples in first edition AD&D. The Marilith only WISHES hers were like that.

Were those things at some stage referred to as snap-tongs? If it were so then that only makes them more kitchen utensil and thus more bosch.

I kinda like the hierarchical pseudo-christian devils vs. heathen abomination demons dichotomy. This is of course messed up by the addition of Daemons and Demodands. But then again, you can never have too many monsters to choose from.

Thanks for linking to the art page in the article, nice resource for a Player with little to no access to the older editions.

Forgive me if this seems a bit scattershot, but I couldn't for the life of me figure out how to email you or private message something unrelated to the discussion.

Do you have websites that you regularly visit to search for "creature sketches", or relics that we see in this blog? Your homebrew monster art has that bizarre otherworldliness; and the set pieces you display are so much more tantalizing than that goofy 4e art for the most part.

If spitting links out in the comments section strikes you as lame I'd appreciate a terse email for sure!

i just use google

No argument. Gelugons are metal.

And while I think Balors are meh, Pit Fiends are a more interesting concept. They use their size and features to invoke reverence instead of dread and fear. They use their wings like a freaking cape.

And they rape the dreams of children three times before breakfast. A breakfast of puppies' souls.