Expanding The Pantheon, One Bad Joke At A Time 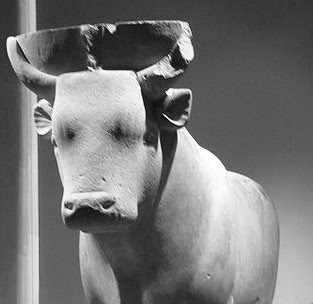 Steve: "I'll be a cleric this time so we can have some healing."

Steve: "Can my god be Captain Beefheart?"

So now I gotta figure that out.

The "Say Why not? and then ask why" method for deifacture hereby kicks in:

I figure Captain Beefheart sounds like some berk diminutive for a god's name, like "Jizzy Chrizzy". What the local drunk-Catholic-equivalents would call him.

And Beefheart, in said context, makes me think of one of the villains in Ivanhoe--Front-De-Boeuf-which means either "Beef Head" or "Bull's Head", depending on how you look at it.

("Couer-De-Bouef"--heart-of-beef--is a kind of tomato, also known as a "custard apple" so that's a bit of a dead-end, metaphysically speaking.) 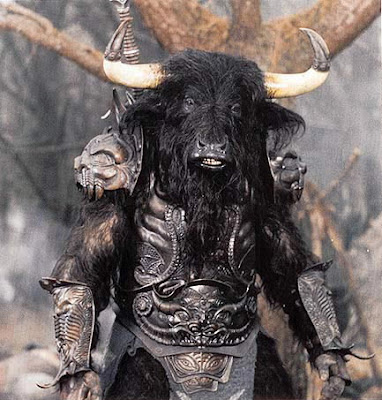 Thinking about Bull Gods, and William Gaddis, I remember Mithras--"I shall sacrifice to his mace, well aimed against the skulls of the Daevas". Well if he's not a god just waiting to play D&D, then who is?

In addition to cattle, Mithras is a god of the harvest (who isn't?), and contracts.

Oh, he needs a local name--Gor.

It sounds fantastic, but it needs some sort of Dagon influence... or the myths where the Captain placates Hunin and Munin with frozen treats...

Nice work as always. But surely there must be a Magic Band associated with the cult.

I recommend having the rites be cthonic-- ecstatic rites underground with a grate, where a sacred bull is led on top & stabbed-- those below are sprinkled with holy blood!

But here's another vote for a warlike fertiolity god, with Cthonic rites, and huge labyrinthine underground mithraeums, and people getting soaked in bull's blood! D&D has oodles of ersatz Greek and Norse gods, but not nearly enough Mithraic mystery religions.

I first heard of Mithras in a David Morrell Suspense novel, Covenant of the Flame. How random is that. But it really is a god that pretty much sums up all that is friggin' awesome about ancient religions.

Gods in our game have included "Nugent" and my cleric's current patron, "The Fabulous Thunderbird".

Iglesias--
Nope, it was "Front-de-boeuf".

I remember Dave Prowse playing the minotaur in the old Dr. Who's "The Time Monster." Classic if cheesy. I am not sure why I bring that up. I can't get enough of Nuru-Ah, the god of cattle from the first Deities and Demigods.

Alas, beaten to the punch in the very first comment. I was going to point out that the Trout Mask was the holiest of the artifacts of the sect, and that each major temple would perforce require its own Trout Mask Replica. So, never one to stop beating a horse merely because it has passed on, I'll post anyway.

I can see where Couer-De-Bouef could be useful, if one used the "bull" translation and not the "beef" one. A deity with a bull's heart could be said to be an unusually stalwart god, a god who demands perseverance from his followers. An unshakable god.

Been reading for a while.. just wanted to say congrats on your interview on the Wizards site. Now I'm off to read it.

I've heard about your blog on various places before and had preformed a very negative opinion. I popped on over after seeing the Wizards interview, and frankly, its actually a great D&D blog, better written than most, and a nice variety of topics. I don't think I'll be a regular reader, as most of your views run counter to my own, I definitely think you are a gifted writer, a great DM, and your blogs bad reputation in some circles is total crap. Good Luck.