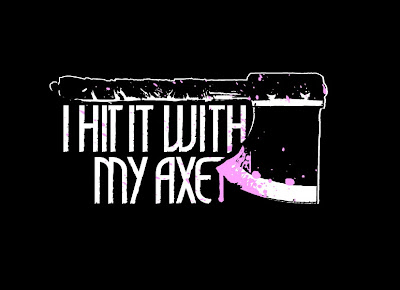 So I've heard people complaining that there are too many good DIY D&D blogs to read them all, so, in deference to their sensibilities, I will make sure this entry contains no useful information about games and instead just say that the TV show launches tomorrow at noon Eastern Standard Time.

The rest of this entry will consist mostly of stuff I've already posted before:

Here's what I can tell you about the show:

-It's for a website called The Escapist, which also publishes James Maliszewski's column. They apparently heard about this blog and decided to get in touch.

-There'll be a new episode every week for a year.

-The first episode is like an intro episode so it's kinda the least funny, in my humble, but there' s no way around it.

-All music will be by The Sword.

-It'll be like us actually playing D&D in a continuing campaign you can follow. It's not scripted so I guess it's a "reality show" but unlike other reality shows, it is funny.

-So, yeah, that means that I have to run two campaigns, one for when we film (so it's easy to follow on the show), and one for our normal games. The filmed episodes pick up after this session.

Here's what I can tell you about the rules we'll be using:

I like AD&D, but Satine--my most experienced player--started with 3.5, so I am running a very lite version of 3.5 made so it is as much like AD&D as possible.

My rapidly levelling-up players have begun to creep around the Player's Handbook and ask unsettling questions like "What's a skill point"? I fear soon they will all want a level in Demonborne Fleshtoucher or some shit.

Problem is, once you give someone a toy, you cannot take it away. So I have to stitch together a mongrel game of the old rules which I like, and the new rules which everybody here is used to.

-You can be whatever basic class or race from whatever type D&D you want. Except, for obvious reasons, any kind of bard.

-No battlemat--I got a ruler if you don't believe me that the deathgrub just moved 6".

-Complex tactics in battle will be house-ruled on the spot.

-Experience point awards and levelling-up will be as 3.5. No x.p. for traps. You can also do this.

-Beholders will appear to be spherical eye-ball monsters rather than the deformed product of a night of incautious passion between a bell pepper and the Kree Supreme Intelligence.

-Hit points, damage, and ability-score bonuses will be as 3.5.

-# of spells and class abilities will be as AD&D except what anybody's already got when we make the switch at the beginning of the game.

-Saves will be as 3.5 because come on AD&D. Wands, staves and rods?

-Thieves will have whatever skills (a "skill" was/is interpreted as the privilege of re-rolling a failed ability score check roll to do the relevant thing--that is if you have "climb" you can roll twice on your strength to climb a rope and use the best result) they had from 3.5 before the switch + normal AD&D pick locks, find traps, etc. chances.

-Skills are only for thieves.

-Barbarians can still Rage as in 3.5.

-Spells you already have remain as-is. As for new spells--if you can find it (in any type of D&D or any other game, for that matter) you can have it. Precise effects of non-AD&D spells may vary slightly from what's printed, according to DM fiat. A standard sleep spell will generally get a save. Anyone using anything from Eldritch Weirdness will be considered totally badass.

-You can use any weapon or armor you've already got, but unless you're a fighter you can't just pick up any old new weapon or armor once the switch happens and expect to be good at using-/moving in- it.

-Racial bonuses will be 3.5. Gnomes will be treated as dwarves, only midwestern and possibly homosexual. Dark elves will not get a level-modifier for purposes of calculating x.p. because I forgot and accidentally levelled Frankie up early and, hey, considering how new she is to all this and how she almost ket the party get TPK'd twice due to having forgotten her Drow's once-per-day abilities, I think it's ok to handicap her a bit.

-All monsters and other foes will be custom-built to fit Type Mongrel stats.

-The top halves of Mariliths will look like hot chicks--as in AD&D, but will appear to be capable of ordinary movement and locomotion, as in Type 3.5.

-If you want to try to kill a god rather than some Mickey-Mouse "aspect" of the god, be my guest, just remember its HP and damage will be 3.5 scaled.

I am looking forward to it. The logo is great too.

I would never ignore this post! Nice logo btw.

My wife asks if you will be wearing a cape like the dude in Dungeon Majesty. She found that hilarious.

Only one way to find out, true believer.

This will be awesome.

I'm wicked looking forward to this. Plus, The Sword is awesome.

But, I just remembered how I can't stand waiting for weekly installments and I much prefer to be uncool and find out about things a year after everyone else so I can watch them all in one epic-caffeine-fueled-calling-in-sick-sleep-deprivation session.

Damn Time and it's tyranny!

P.S. Link at end of "The filmed episodes pick up after this session." is bad.

I can't wait. Been looking forward to this big time.

I've say it before and I'll day it again, Kree Supreme Intelligence just can't get no love.

And if nothing else music by The Sword.
How freaking cool is that?

Looking forward to it. Love your handling of Gnomes.

I've been looking forward to this. Hope it gets on TV or video some day too.

The Sword are really good. I was going to say something snarky about them, like "I preferred their music when Black Sabbath was performing it," but actually they rock.

I like beholders as they appear in the MM. My brother, who is my usual DM, has been taunting us with an evil wizard named Gleep Wurp the Eyebiter (which I think is from the original Rogues Gallery?) and when we finally encountered him, it was basically a beholder with a tiny fetus-like human body hanging off the side, and some shreds of fine silk robes clinging here & there, which seems like the sort of the thing I'd half expect to turn up in one of your games.

Anyway good luck with the show!

How do you handle non-combat proficiencies?

Gratz on getting the show up! I foresee good times ahead!