Fantastic genres usually work via escalating inventions: they show you a star destroyer at the beginning and the Death Star in the middle and a multi-starship fight on the Death Star at the end.

Sci-fi and fantasy settings (and the kind of sci fi and fantasy stories where the whole story is within one of those settings) generally put the inventions right up front. The first scene has something our world doesn't: a wizard, a Hobbit-hole, whatever. The inventions here are often things you could make a toy out of --they are objects, creatures, buildings. They are things.

Horror typically does not work that way. A lot of game masters who are very comfortable with sci-fi and fantasy aren't sure how to do horror and one reason is the inventions are more ephemeral, rely more on techniques specific to the medium they are in (word choice, pacing, lighting, camera angles etc) and depend less on invented things than invented events or situations.

Simply: a dragon puts you firmly in fantasy. A vampire doesn't quite get you to horror without some other stuff.

Horror involves, unsurprisingly, the deployment of horrific inventions, but what makes them scary is the way they're deployed. There are basically three kinds of inventions in horror and they generally appear in a strict order.

When you're laying out a horror scenario, here are some things to plan beforehand: 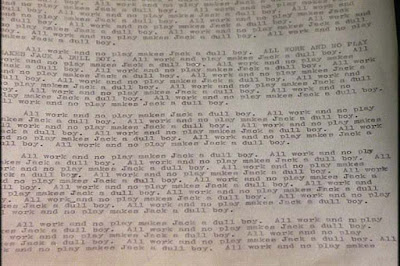 The first strange invention in a horror story is usually unsettling, but that's it. It's not gory, elaborate, or necessarily supernatural it's just off.

The camera pans across a burned district, every home a pile of incinerated trestle-work, bent crosses and blackened furniture, and then, somehow, in the middle of all of this, one lone home utterly untouched--green lawn, painted shutters.

The unsettling thing is usually the intimation of a problem (like Jack's manuscript in The Shining), a clue (the way the old Count refers to the wolves howling as music, the lights flickering in Stranger Things) or just moody symbolism (the deer in Get Out), but the players don't know which at the time. The unsettling invention makes you go: what happened here? The ambiguity adds to the mystery.

The more unsettling things you can think of, the more it becomes a psychological horror story (Rosemary's Baby barely moves past The Unsettling, David Lynch's films live there). The more of them actually end up being explained by the resolution the more satisfying it is as a mystery story.

In game-mastering terms: it is good to think of an opening unsettling image. That is--as much as a monster or npc--something you have to invent before you begin running your players through a scenario. If you can't think of anything better, a bizarrely-injured corpse is as durable a standby as meeting in a tavern. 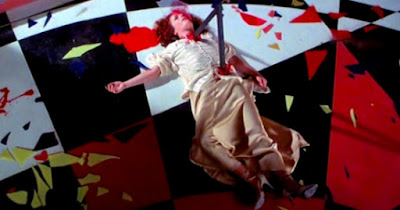 This kind of invention is often the Big Moment in a horror movie, and frequently a place for body horror and/or gore. Whatever the menace is, it's gotten to a victim and, more importantly, gotten to them in a distinctive way. The chest-burst in Alien, the head explosion in Scanners, the guy nosebleeding and freaking out in Get Out, the swimming pool in Let The Right One In, the various gurgling lunatics in Lovecraft stories.

The important idea here is: the terrifying display of the menace's effect on the world is in itself a horror and a thing to invent, as much as the creature itself. If you can see it before you actually see the menace, you ratchet up the tension.

You don't need many of these--one good one will get you all the dramatic juice you need. But you can do more--the more you do, the more story becomes a gore or survival-horror type situation. Scenarios which emphasize panic but don't spiral toward any specific monster image--like Suspiria or Carrie--can rely a lot on these. 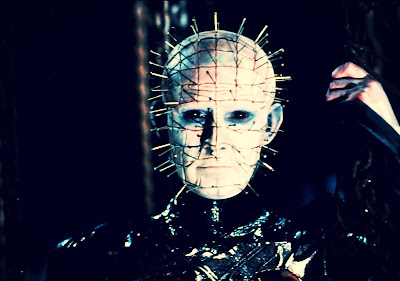 This invention is the most similar to what you'd get in any game--this is the monster. It can also be a person, a group of people, a place, even (in the case of Carrie) a special effect, whatever, the point is the whole situation has been building toward this and it better be scary.

The best advice I can give a GM on this score is that the menace at this point has to have some kind of unexpectedness about it. A typical heroic tale can get away with a final showdown with a guy you knew would be trouble all along, whereas in horror there has to be some sort of element of reveal to it. The dad turning out to be a vampire in Lost Boys, the impossible rooms in The Shining, the full scale of the creature in Alien. Save something for that last scene.

Robert E. Howard's Conan story "The God in the Bowl" seems to me to be a perfect fit to the unsettling (dead body murdered in a weird way), the menace (the open bowl, the mysterious black pipe on the ceiling) and the menace... (the inhuman face that Conan confronts)

I have to wonder if level based RPG games don't embody a structure that is the three shadows in their very DNA. But do do it right the GM has to know this.