I tested the Demon City character gen rules (mostly the 5 skills plus miscellaneous bonuses system) by trying to see if they reliably produced the kinds of fictional characters I could see running around Demon City.

Here are a few tests I ran:

This is Jesse as he appeared at the beginning of the Breaking Bad... 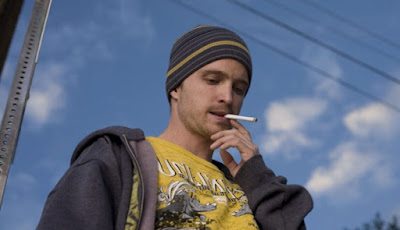 Jesse Pinkman
Drug dealer
Role: Investigator (There's no horror investigation in BB but Jesse is motivated by money, so ok)

Characteristics:
Calm: 2 (Average. Jesse flies off the handle but he never really cracks up until he gets heavily addicted later)
Agility: 3 (He manages to climb that fence and steal his rv alright)
Toughness: 2
Perception: 2
Appeal: 4 (Kristin Ritter, dude)
Cash: 3
Knowledge: 2

So that's five skills plus one occupational--which has been replaced by an extra plus one on Streetwise and one extra for being an investigator--plus Science (Pharmacy) comes free with Science. Perfect!
I didn't give him Deception or Persuasion because although he does both, he has a decent Appeal so it might be down to that.


Krazy-8
Skinny Pete
That girl he hides in the hotel with
That leaves him with 1 floating contact, who is probably one of the people who came to that endless party he threw.

Here's Lester from The Wire... 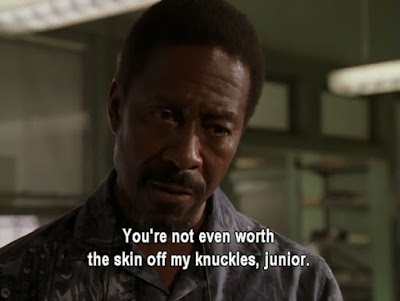 Skills:
Burglary/Theft: 2
Firearms: 2
Stealth: 2 (he does stakeouts)
Hand to Hand: 2 (he was in the army, he smacks Bird with a bottle)
Occupational (cop): 6
Streetwise: 6
Deception: 4
Local knowledge: 5
Research: 6

So that's 9 skills. 5 skills, +1 occupational, +2 extra for being an Investigator. Leaving us one short. We could argue that "Occupational (Cop)" is covered by Research+Local Knowledge+Streetwise+Burglary/Theft. Also I seem to recall that Lester didn't know that much about, like, surveillance exhaustion arguments etc until the lawyer explained it to them a few times.

Plus we could bump up his Deception by one if he takes the "add an extra point to a skill" option instead of the extra skill. 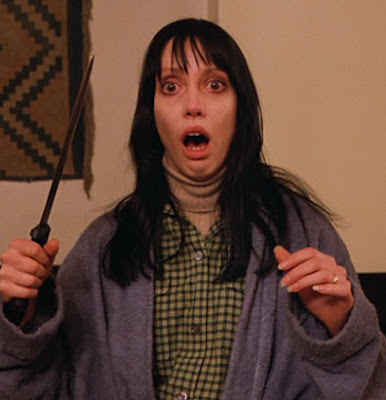 -Victims max starting Calm is 4
-Victims’ earnestness is manifest—they automatically gain the Persuasion skill equal to their Appeal plus one.
(And they get other stuff not relevant here.)

Ok, now I could max out Wendy's housewife, or mayyybe add like Driving, but those feel like cheats--she's 3 skills short. She learns how to work a radio and other maintenance stuff pretty well but those kind of happen after the movie start--arguably though they happen during the set-up, so they're "gained" in the exposition. Still "running a frozen hotel" is really only one Occupational skill.

Basically either the system is overestimating Wendy or The Shining movie didn't show us enough of her outside being a victim. Maybe she's got more going on in the book?

Also, y'know, The Shining is 2 hours long and The Wire and Breaking Bad are series.

I've been thinking about this a lot recently.

I'm curious if, for Lester, being good at building tiny dollhouses is something you'd consider a skill - I can't see it coming into play in this type of game ever, so my thinking is its just an Other Hobbies Downtime activity for him.

Wendy Torrence is tough - I think taking another occupational skill for Hotel Caretaker might help for sure. Can you have more than one Occupation? It's hard for me to think of ways to break down some of her skills that don't seem useless (like you could give her cooking or sewing or that kind of thing, but again, those seem covered by downtime activities).

Is there any cross classing of roles? I was thinking of Jules Winnfield and how at the beginning he's an investigator (trying to get the case back from Brett), although maybe he's just a thug following orders at that point, but then later in the movie he's more of the Curious (if it takes forever, I'll wander forever).

Is Demon City concerned with this kind of change? Does a Curious character ever become a victim? Or is this just more of the starting place for them, what motivates them at their very core?

Wendy does have more going for her in the novel. Kubrick's decision to make her into a pure victim is one of Stephen King's complaints about the film: https://screenqueens.wordpress.com/2014/06/04/king-vs-kubrick-the-shinings-wendy-torrance/

You can have more than one occupation and Role only describes why you started investigating, not what you do later--though i should clarify that in the final rules.

That definitely says Kubrick rewrote Wendy to be less competent but the question is whether she had other skills-- do you know if she did?

Okay cool, that all makes sense.

She had some secretarial background skills in the book that I recall...

I'd maybe consider raising her Agility to 2... she was pretty good with a knife fending off Jack.

2 is average and I feel like the effect Kubrick was going for was that she really was an awkward mess about using that knife so it was scarier but then she actually did manage it and that's kind of surprising.
In Demon City, having a knife against an unarmed person with a higher dex than you gives you 50-50 chances.

"Occupational (housewife/mom)" sounds kind of like bullshit to me, not because that isn't a super important in the real world, but because that sounds like 100% wasted points in an RPG. Is that seriously going to be as useful as Lester's Research or Streetwise? How?

Horror stories have lots of normal people of no particular skills in them—the kids from Stranger Things, say. Apart from maybe biking and 1 pt in Radios, they don't do anything that's not just a general Calm or Perception roll. If you want to let people play them or a Victim like Joyce, then it seems to me there needs to be something other than skills to spend points on.

Is there a list of skills, or is it a "make up the skills fitting your character" and go from there?