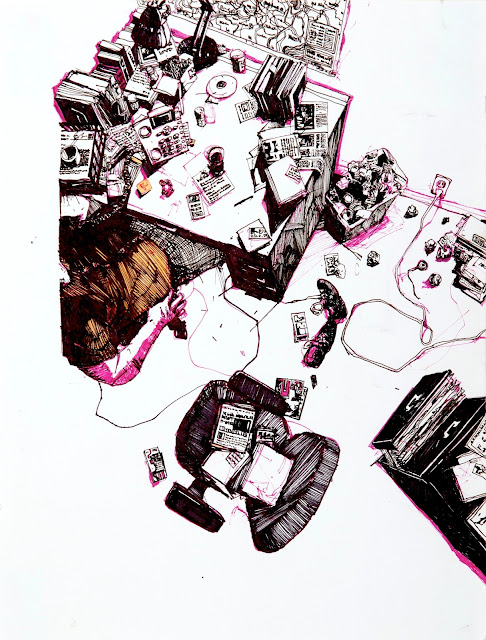 There's a clue. They roll, or scan the handout of the crime scene. They don't get the clue.

This is usually presented as a minor apocalypse in horror/mystery type games. Whatever can be done?

As far as I am aware, the professional roleplaying game design community has, on this score, failed you.

Demon City won't do that--it's going to have very specific and very detailed advice on ways Hosts can make scenarios based around investigations.

One very useful building block of this is described in the retropost below: 5 years is a long enough time that some of y'all might not have been around so I'm posting this to tide you over while I write up some rules I'll post probably tomorrow.

If you're interested in Demon City, the Patreon is here. Thanks to everyone who helped out so far, with only a few more backers, it'll be done by Christmas. The original version of this post, with a longer intro, is here.

-Most investigative scenarios advise breaking things up into "scenes"--the idea is you have a scene, find clues in it, these clues lead to the next scene. They then usually cover their ass by saying either "if the PCs don't do this or find this clue or go to the wrong place give them a bunch of hints or a prophetic dream or otherwise nurse, nudge, or nullify them until they go to the next scene" or just give some vague advice like "hey Venice is interesting, think of something"

-Not so here. Or not exactly: Basically we keep the "scene chain" structure. If the PCs go from clue to clue in a timely fashion like good investigators they follow the scene chain. However, we also give each scene a twin situation, this twin is what happens if the PCs don't follow a given clue, follow it up the wrong path, or otherwise take too long (in-world game time) to follow the clues. In this twin situation, typically, the PCs have taken long enough to figure out what's going on that the enemy has noticed their efforts and started hunting them.

-In the twin situation, the GM decides how long it will take (in-world) and what circumstances are necessary for the enemy to be able to track the PCs and starts the clock running. The enemy then catches up with the PCs at whatever point it logically would if it was using whatever tracking abilities it has (whether this be psychic powers or enhanced smell or because Twitty says she saw Mac D talking to a cop next to the sub shop). The GM may drop clues as to their hunted status along the way.

-In situation 1, the PCs are investigators of horror or violence, in situation 2, they are victims of it. This matches rather nicely the twin roles nearly all horror and investigator protagonists have in these kinds of stories. So at each stage of the adventure you have an "i" version and a "v" version of each scenario.**

-The enemy has a locus: usually in physical space. Like: that island Cthulhu is under or the gangster's safe house.

-At each "Investigator" stage, you move closer to the locus (or finding out where it is). At each "Victim" stage, the enemy sends someone or something out from the locus to get you.

-IMPORTANT: Usually the enemy comes in a different form at each stage. You don't meet actually Cthulhu or actually Al Capone until the last stage. The first few stages feature their agents or otherwise indirect confrontations.

-Also important: at each stage, a clue is left. The clue leads to the "i" version of the next scenario. 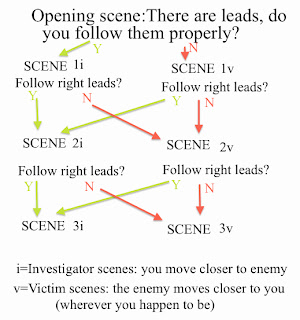 Opening: PCs are on their way to England on a boat to investigating the Proverbial Mysteriously Dead Uncle

2v--a(nother?) nurse is following you and attempting to drug you(wherever you are) (has distinctive uniform from a certain lab)

3v-the doctor appears (wherever you are), a strange creature emerges from his featureless face (wherever you are) --a decent add on here is a chance that the doctor drugs a victim and drags him/her back to the lab or, if injured, runs back to the lab, leaving a blood trail. Either way the encounter at the lab--if it happens--is significantly different than if the PCs had just gone straight there and surprised the mofo
(this adventure brought to you by the lyrics to Sister Morphine)

-The "victim" role may seem passive, but in a sense the victim has more freedom than the investigator in terms of defining the terms of the conflict. Let's say we have the simplest scenario available--the PCs are being stalked by a werewolf. Even if the PCs are totally passive--they have the entire planet to walk around on. Will the werewolf attack them in a taxi, on a plane, in a hotel room, underwater? Depends entirely on where the PCs themselves go. You could even say to them: "The sun has gone down, according to what you've seen, the werewolf will be active within half an hour…". If the PC is in, say New York City, the number of resources s/he can bring to bear or changes s/he can make to the battlefield are infinite.

-Victim scenes require you to think like the monster: you are an insane doctor bent on injecting people with a "sacred" serum that makes their faces come off. You've discovered a flapper, a librarian and a drug addict are trying to interfere with your plans, What Do You Do? Where are you? What tools do you have access to? What information on them did they--via their actions to date--give you access to? Use it.

-In many adventures, there is no reason this system should not be transparent--making it clear through events and other characters that "it is vital to find Whatsitsnuts before it finds you".

--Broadly, any structure which has meaningful choice works like this: there are interesting choices leading to events, each event gives the players a unique resource or unique problem they did not have before--even if they all lead to the "same" place in the end, players end up there in the Final Chamber with different tools, perspectives, advantages or disadvantages.

-How do you avoid even the appearance of railroading? Just remind them how they got where they are. Go ahead and tell them where they'd be had they done otherwise.

-Another avoiding-railroading tip: include problems that are clear but open-ended, like: this puzzle requires you get us something old, something new, something borrowed and something blue and shove it in this slot. A real-module example is the "tooth door" in James Raggi's "Death Frost Doom"--you need to drop a tooth in a basin to open a certain door. Where you get the tooth from is your business, but the place is fairly isolated. There are a lot of graves around…but also a few other PCs…and that NPC down the mountain...

**Important clarification:
The Victim scenario is not nursing the PCs back on track by doing an ass-pull. In Hunter/Hunted the "Victim" scenarios are entirely logical, predictable-using-internal-gameworld consequences of the PC's failing to find the foe. i.e. if you don't show up at the safe house in 3 days, that's enough time for the goons to track YOU down. No alteration of the gameworld's internal logic or consequence chain is required. Pure cause-and-effect. the villain is not running into you by coincidence, it's because you dawdled and they managed to track you (thus the ticking clock).
-

RPG design is often hobbled by artifacts. I use the term "artifact" here to mean left overs from older versions of a rule system. The first versions of D&D still had vestiges of Chainmail built in and these incompatible elements persisted within the system for decades. I bring this up simply to say as designers of RPG systems we often simply build on what has come before. It is important to question why something is the way it is, especially if it doesn't work.

"Undungeon crawls", or adventures that take place in some version of our contemporary world require more effort on the GM's part, IF the players are allowed to exercise free agency. COC, espionage games, cyberpunk and horror games all fall into this.
As the perpetual GM, I decided long ago to build adventures without solutions. Where is the fun in knowing how something will be solved beforehand? I craved the same right to be surprised by the turn of events as everyone else.

Here is how I have addressed the Hunter/Hunted issue:

1) Traditionally RPG adventures are written in a linear narrative. This format by it's nature propagates a railroad approach. My solution is rip off the spine, each page becomes an element written on one 4x6 card. The adventure physically is no longer a narrative and the physical parts can be rearranged at will. In a way it emulates windows on a compy screen (which is where I'm ultimately headed).

2) I find having a thorough understanding of the the characters, their motivations and the setting is essential. Creating this logic is what always takes the most time in the preparation. Having it, I can react to what players do, especially if they are encouraged to exercise free agency.

3) I create time lines as guides. These will have a lot of the Hunter/Hunted stuff built in. Locations (these are usually the standard map/key) and events are put onto cards. I usually try to imagine events that the NPC's would do as responses to player actions, these become guides I can use on the fly to propel the adventure. Events also cover acts of nature and other random things that are likely to occur.

I think where you are headed is an important space. There are a lot of unanswered questions. I am working on a system currently that has brought the old accepted ways of doing things into the light. There is much to be done.