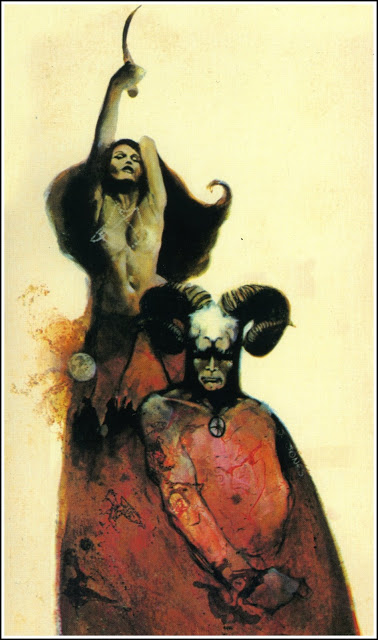 I was thinking about Dracula, and about Dario Argento, and about giallo movies.

Wouldn't it be nice to have a rich, dark, sexy, gorgeous, gory hopeless game, with hopeless stars burning hopeless overhead night after pitiless night as the characters hopelessly stalk and are stalked?

But you wouldn't, because the players are too fun. They would laugh and eat and they'd sooner or later find a way to kill Dracula and they'd fuck his face with fish fingers--and that's good. That's the good stuff. That thing I described: it'd be a good book. It'd suffocate my real players after a while, not enough of the real them would be in it. You'd wish you just read it or watched it.

And that's, in the end, how games work, I think. How the best games work: the GM (and maybe the game, whoever wrote that) brings the beautiful, and the players bring the fun. And you never know which one will win in any given moment and that's the wonderful part of it. Just when you think it'll just be fun, the grotesque beauty of the pupa splitting apart to reveal your own awful clone hits you over the head. And just when it's majestic in its direness, someone distracts it with a chicken and natural 20s it right back down to the pile of hoary tropes and adjectives it was sculpted out of.

It keeps you grounded, it keeps you guessing, it makes you laugh and then hope and then ooh and ah and squirt milk out of your nose but you don't know which when. And that's what it's like being in the middle of good drama: the confidence that a story will contain everything the world might contain yet not knowing which one's coming up.

I can see a Theory Of Gaming coming up with only that principle--keep the Beauty and the Fun in constant conflict--and don't try to tumble either way, or you fall into predictability. You will know what's around the next corner and you'll be above it. And you shouldn't ever be above it--you should be in it.

Thank god, I was starting to get twitchy.

This is why I always run Dark Heresy seriously - 40k involves a certain amount of satire, but the players manage to do that entirely on their own.

wonderful. exactly, yes.
boring people are not going to like this one. I predict a secret thread will pop up somewhere just for the purpose of spitting weak venom.

I imagine that a comedy game would be lots of fun to write. It is just that no one wants to play it.

What blog entry did you just read?

One of the best things I have read in a long time... Really puts some of last night's session in perspective

"Only boring people like (X type) games" -- seriously? Weren't you the guy who wrote long inclusivists screeds about how it's stupid to fight over gaming style on the internet when everyone's tastes are different? Or have you just given in to the dark side?

You lack precision, anonymous internet commenter: I often say you can't say a _game_ is good or bad. You can most definitely assess the audience.
And, of course, I never write screeds. I write things that I thought about and can back up with facts.

"And just when it's majestic in its direness, someone distracts it with a chicken and natural 20s it right back down to the pile of hoary tropes and adjectives it was sculpted out of" is probably the best sentence I've read this week.