…welcome to Los Angeles and to your upcoming game with the D&DWPS crew.

I know you to be a reliable man, I know your elf assassin Malice to be a stalwart if not always prudent ally and I know both of you to be obsessive process-freaks eager to exploit any feature of the environment to your advantage. Not that it really takes one to know one--but it doesn't hurt.

Sunday's session will begin on one of those "Hey you could go anywhere" points so annoying for GM. In addition, the backlog of twists and turns the dice have thrown up over recent weeks has made it a thornfield of plot hooks even I am at a loss to keep straight. However, unlike the girls, you demonstrate some level of goal-orientedness and between-session Machiavellianism and, perhaps more to the point, have but one session to wrench treasure from the jaws of random hex-fumblery and thus force some shape onto your character's destiny before you get in your weird car and drive off to show lasers to children in some other state for your weird job.

And that is why I address this wrap-up of recent campaign events and opportunities primarily to you despite the fact that you will neither be the only player there nor even the only new player there.

Here's a wrap of what's recently happened in Drownesia.

So they were fleeing the Bone Sorcerer...

Luckily, the wizard just leveled up, so suddenly he's like "Hey I have Shadow Walk now, we can just get out of here".

Excellent, now I get to describe the PLANE OF SHADOW.

Then, ok so they're back where they were in the impossible to rememberly named village of Viswanathananand.

The Warmistress Parvathra welcomed back the heroes and heroines and was all "Oh while you were away diplomats came from 3 lands".

They decide to meet with them right away and because I rolled that it was late they'd already made dinner and ate it so the players needed an excuse to see them all together so they decided to make a dessert and serve it.

This involved everyone in rolling dice and made the unseen servant into a prep cook and I had to use that Abulafia table that describes a random wine and I had to look up whartleberries.

They had limited success with the diplomats, which I described all Disney like one all green eyeshadowy and one all red baggy pants because it's hard to keep all these fucking names straight, really, so I made them extremely freaks.

Still it was going ok until the wizard started a food fight. Two of the diplomats left, but the one from Dalafash Opnow was charmed and invited them back to the city see the Deaf Pasha's panda.

So they went hexcrawling, with Stokely in the triceratops howdah with him, they ran into some raiders by the river. They had 4 HD but there was 51 of them. And a flail snail.

After a harsh campaign of backstabs, fireballs and trash-talk, the bandits finally surrendered their loot and one of the two hostages from the diplomatic caravan they hadn't killed already.

Then they met some blind mutant women who see through their clouded lynxes, with whom they traded rare herbs and spices. Then I got sleepy.

Fast forward to the next session: 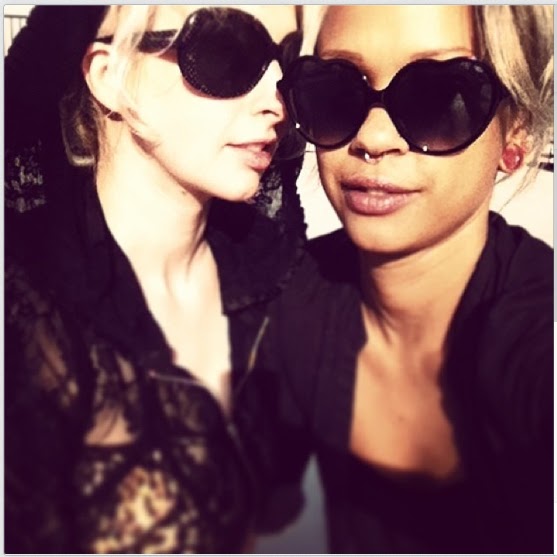 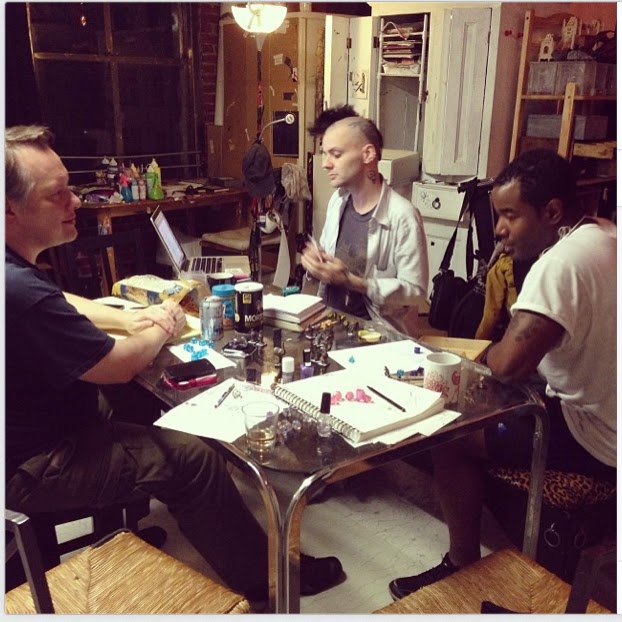 Tyler showed up. He rolled hardcore, got terrible stats, picked the slave, there was a rumor about mystic tomes he fought snake cultists of the Jade Fang. Tyler rolled a natural 20 to backstab on first attack, acing a cobra king. The rest was a round up. Oh, also some elves showed up.

Then they continued to the BLACK PYRAMID (also green) and there was a mad imp--the imp made Tyler dance, then turned him into a snake. He took it with good humor.
___

Down Into The Black Pyramid:

There's a goat guy down there who says the black pyramid is a testing cell for the Viridian Knights  of Tiamat, Demogorgon's Brides. Mandy (who he calls "Wolfspawn" for some reason) is all over that.

The party rests in the dungeon. always foolish. The Bone Sorcerer with his many lotus-zombie crocodiles appears, he gets shrunk, his crocs get punked, PCs escape without much exploring the pyramid.

Back To The Palace of the Bone Sorcerer

They trace him to his lair, kill a hag in a mud pit, then some jaculi (arrow snakes), then….a Marilith. Fuck. It has lots of hit points, 80% magic resistance and 7 attacks per round doing d20 each. Mandy: anti-magic shell. Interposing hand. Globe of invulnerability.

So:
Connie goes to backstab.
Misses.
Adam tries for the black tentacles.
Misses.
Marilith throws Connie into the tentacles.
Mandy runs in an antimagic-shell into the tentacles, getting rid of them.
Adam (globe of invulnerability) runs up next to Mandy.
Marilith beats up Adam. He's down.
The Marilith then beats the everliving shit out of Adam and Mandy.
Now, normally, Mandy'd be teleported away at 1 hp thanks to the ring she stole from the goblin king, however, the antimagic shell means it only works after she's unconscious and the antimagic field is down, so she's teleported away….but unconscious.

She sits in a Random Dungeon Room, waiting to be eaten by a wandering monster.

This Marilith is still alive in there.

They meet a fellow in the Plane of Shadow. He's a guy from the Black Pyramid. I figured he'd be there.

They, (Adam's idea: clever) offer to trade the idol for Mandy's location.

But they do anyway since otherwise Mandy probably dies.

Connie basically 1-shots a hag in the dark who then tells them how to escape. 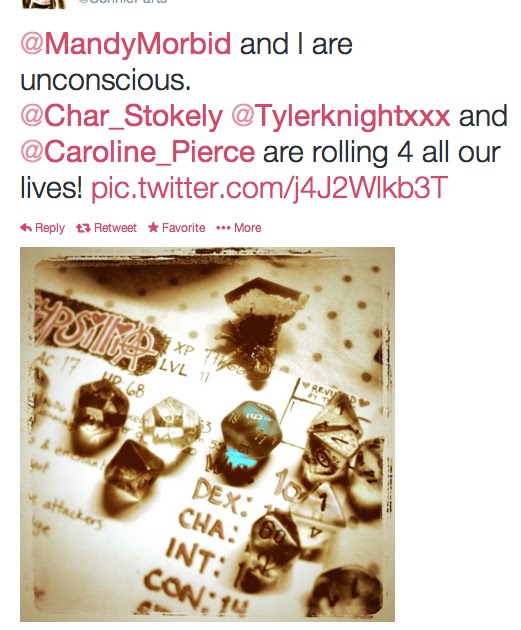 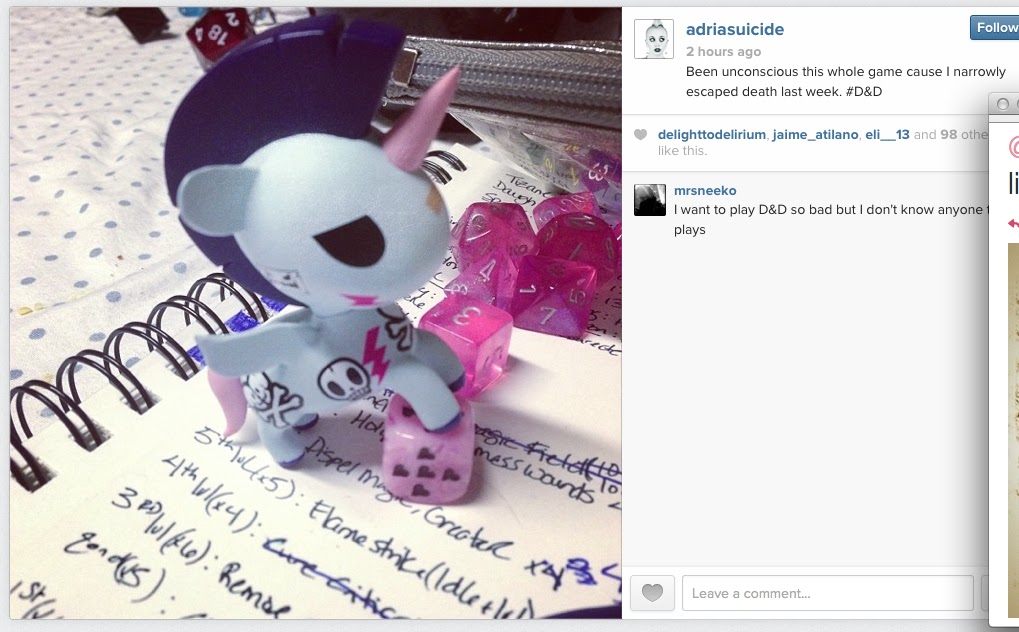 Mandy still unconscious, thanks to some blind warrior woman cat alchemist medicine is healed in caves.

Stokely gets her to safety thanks to leveling up and getting Teleport just in the nick of time.

Then some cultists of the Jade Fang show up...its pretty close to a TPK (Mandy's unconscious the whole time,  Tyler's a snake the whole time--but Stokely's interposing hand saves them).

And these Fangs...why are they here? They do have a lot of treasure.

Also: Connie caroused and woke up next to a succubus. We'll start there if Connie isn't working Sunday.
-
-
-
So there you go, Weber, that should be enough toys to be getting on with. Personnel will likely be: Laney (elf ranger), Mandy (tiefling cleric), Stokely (wizard), Adam (wizard), Skin (making a new PC).

Welcome to the major leagues--look sharp, be charming, don't interrupt the girls when they talk, and, if you don't like weird fruit and rabbit food, bring some snacks and remember the average level's 3 higher than you. Arrive at genius o'clock.

Wow your style of game mastering is like totally different. You don't seem to use any one version do you?

There is about to be major competition against your website just to let you know!

Other people who game and have interesting careers are also releasing blogs!

So you can try and glorify your life but when people see a bunch of scantly clad 40 to 50 year old overweight balding male air traffic controllers your site will most likely be marginalized!

Check my blog out at
http://backtothedungeon.blogspot.com/

what the fuck are you talking about?

Hopefully a little more on topic: this is a great way to deal with a rotating cast on the player side. How do you handle it on the character side? Do folks just kind of pop into and out of existence? Do your core folks have multiple characters they play if their other one is tied up somewhere?

I've running a hexcrawl that started in the vein of West Marches, but people are beginning to find the "return to town at the end of every session" thing too restrictive, so I want to see how other folks handle it.

hands reach out of the shadows and pull people into the lands of Faerie. And then put them back

It was an attempt at humor but I think I rolled a 1! Great blog, never boring.

Yeah, right. They think they're back...