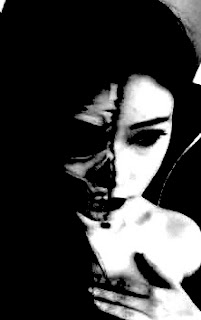 The creation of a Lichwife requires two main ingredients: a willing she-lich and an unwilling and completely innocent good-aligned sacred virgin--human, female, cleric or paladin--of precisely the same height, build, and species.

Each is divided down the middle with an awful bone saw and the halves are fused to their mismatched twins with baleful arts. This typically produces two Lichwives--one Lich-Sinister one Lich-Dexter.

The unwilling victim remains alive and can be saved if the lich halves are slain, however, the victim-halves are physically subservient to their evil halves and typically do nothing but scream and beg for mercy.

Allowing the living half of a lichwife to die generally has dire consequnces. Make some up.

Lichwife has the abilities of the familiar lich plus the following:

-Twice as many actions per round.

-Defenseless or successfully grappled targets may be level-drained.

-Immunity to effects granted by the "stitched" cleric's god--including turning.

-The evil half may modulate the voice of the living half to disturbing effect--anyone hearing the living half's pleas must save or cower in disgust as if affected by Fear.

-Access to all spells of the "stitched"cleric (except those which specifically and exclusively assault evil).

-The evil half may regenerate 6 hp per round by draining life from the good half. 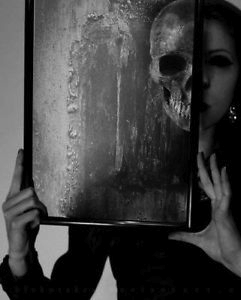 Woah this is creepy as fuck. Awesome job.

Ok it sounds neat and I can see the use of this in a game. But maybe I am overthinking this but what does the lich get out of the deal?

To me it seems if I were a lich I just stitched on a new half that is less powerful than my whole self and could potentially be a liability. Ie in the form of vengeful churches, families, white knight adventurers.

Sure there are some new powers in the form of spells and turning protection, but are they worth the trade-off in terms of new weaknesses.

This is fantastic! so awesome, so creepy!

But the lichwife gets two actions per round and free spells! I don't know about liches, but every munchkin would go for it, for sure.

The lichwife gets every thing that the lich has, but with all the added bonus and access to divine spells. With two actions per turn the lichwife can cast divine and arcane spells. That is pretty powerful.

Evil is its own reward.

The only thing that makes sense is the "Evil is its own reward". Sure it gets extra attacks. But it can get a Haste spell to do that too. And there are plenty of ways to get divine and arcane spell casting.
I see stiching on a potentially weaker addition, who if it dies you die, to be kind of a large Achilles heel.

Now if this was part of it's cult, or maybe there is a cult that does this and the lich is as much as a victim as the virgin/cleric/paladin then there is a good thematic reason for it.

That is seriously messed up in the head. I LOVE IT!