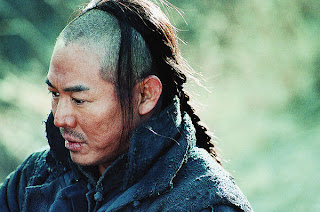 The problem with most martial arts systems in D&D is they either add steps to combat (thus slowing everything down), require no in-game choices (so you barely notice them in the game)--or they focus too much on individual moves (making it into, effectively, a whole second Vancian magic system where the player has to go around "collecting" lone moves unattached to any wider fighting style in order to behave differently than other PCs in combat).

So anyway I created these simple but relatively abstracted martial arts systems. Any one school should give a practitioner a slightly different feel in a fight and a dedicated PC who went around and put in the effort to learn more than one style should find themselves with a series of useful but not cumbersome or redundant abilities.

"Should"--these are untested. Feel free to test them--#1 seems to me, at the moment, the best-designed.

Consider these martial arts to be kind of like magic items--you have to adventure to find them but, once found, yeah, you're better than you used to be.

In order to learn a school of martial arts you have to:

A) Find a teacher of that school--which should be as hard as finding a magic item.

If an opponent makes an attack in close combat and misses, the opponent takes damage from your automatic skillful counterstrike as if the foe had successfully struck himself/herself. This ability counts as your attack action for the round (or the next, if you've already acted), does not have to be announced in advance and can be used once per opponent in any given encounter.

(Many D&Ds give the option to "fight defensively"--not striking a blow, but improving AC by 4. This martial arts style may be used in conjunction with this combat move.)

Look at your Wis, Dex, Str, Con and level. Take the highest one.

First, you may also treat this score as your ascending armor class when not wearing armor, or use its modifier if wearing only leather.

Second, once per day, if you fail an ability check or to-hit roll that you would have made if your score had been equal to this higher ability score, you instead succeed. (This is how wizened old men manage to kick everyone's ass in kung fu movies--they are using their level for checks.)

This style may be "relearned" multiple times to gain the ability to substitute scores more than once per day, up to a maximum of three times. 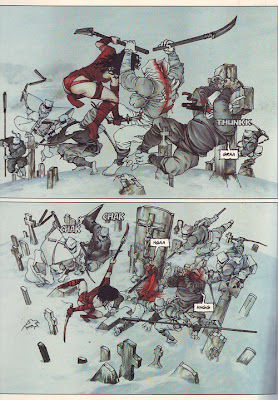 Your damage dice explode. (This is why kung fu people use crappy weapons like throwing stars or their fists or random pieces of wood--a d4 is way more likely to explode than a d8.) If you roll max damage twice in a row when exploding and the damage die is at least d4, you add your whole level to the damage.

Also, when unarmed, your initiative improves. It is +1 if the game usually does not have initiative modifiers standard and +1d4 each round if it does. 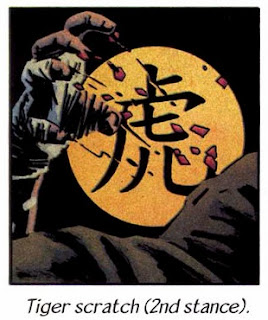 You know a series of unarmed combat moves which make your strike in combat able to act in most practical ways identically to a single melee weapon of your choice--reach, damage, space needed, etc. So, for example, if your style gave you the abilities of a chain, you'd be able to easily entangle limbs at 10'. These moves have names unrelated to the weapons they imitate so, for example, a scimitar-imitating style might be called the Raging Sting Talon.

(Bruce Lee's 1-inch punch is clearly a style that imitates a dagger--doing d4+str damage at only the distance one would need to to use a knife. A full-on flying kick would be more like a 2 handed sword--big damage, but needing a lot of room.)

You also have the option to choose a style imitating a throwable melee weapon such as a throwing axe or dagger--this allows the martial artist to leap, traveling the distance the weapon would travel, strike, and land near the target or leap back to where they began (and only there) on their melee turn. (Arrows, spears, javelins and other long-distance projectiles may not be imitated.)

Multiple Southern Island styles may be learned from the same teacher--the PC chooses the weapon in each case.


5. School of the Purple Lotus Emperor

Once per day, the character may focus ki energy and roll a d30 in lieu of whatever die or dice the situation normally calls for. The choice to roll the d30 must be made before any roll. The d30 cannot be rolled for generating character statistics or hit points.


6. School of the Golden Mantis

ah this is fukkkin rad

The feel of kung fu (or at least fantasy kung fu) has never really come across in an rpg that I've encountered. I can see this working really well and opening up numerous additional possibilities. Great blend of style and mechanics. Nicely done.

"Your damage dice explode. (This is why kung fu people use crappy weapons like throwing stars or their fists or random pieces of wood--a d4 is way more likely to explode than a d8.)"

Can't help but nerdily note that an exloding d4 still does less expected damage than a normal d6.

No, an exploding d4 does an average of 3.33 points of damage. While the first die has the normal average of 2.5, the second die is only going to trigger 25% of the time, so 1/4 of 2.5 is .625. Each additional d4 is a further 1/4 of the previous until you hit the 3.33 range of damage - anything beyond that is too miniscule to manage. Of course, this does not factor in adding the level to damage.

Of course, this is still better than the 2.5 average you are getting with a standard d4.

I was calculating _assuming it did indeed explode_ not caluclating _the overall chance including the possibility of explosion_ .

actually a d4 that does indeed explode does 4 on the first roll (it exploded, which I forgot) and averages at least 2.5 on the second . Which beats a d6 anyway so Leopard is still wrong.

(my mistake--see below but Leopard's still wrong)

While it's true that if the d4 is guaranteed to get a 4 on the first roll, its average will beat a d6, it's not true that the overall average is higher than 3.5 (d6's average). It is in fact 3.33 as Scott Edward's says.

I'm not sure how to argue for that briefly, so I will just argue by popular opinion:

http://axiscity.hexamon.net/users/isomage/rpgmath/explode/ (skip down to the table of averages)

Anyway, didn't mean to derail discussion of these cool systems with my pedantry.

Wow, simple and very cool. I think I will sneak these into my DCC home game!

Martial arts as a magic system makes sense. Really, what we now think of as "martial arts" is the concoction of Wuxia pulp writers and Hong Kong action movies. If you go back and read The Water Margin or Three Kingdoms, the fighting there is not significantly different from melee combat in Western Europe and elsewhere. Just feints, parries, etc without fancy names like Seven Spider Palm or Mad Monkey Heel. Nor are there any white-haired old men with powerful "qi." In a D&D setting, if the Western fighter has no special rules for his "kungfu" then the Eastern fighter shouldn't either, unless it's just for color or fantasy magic.

Your list of weird "should"s seems to depend on everyone caring about the same source material as you.
Which they don't.

Some nice tight ideas there, Zak.  If you're aiming to emulate the kung fu pulp source material, a very common motif is the existence of fighting styles that are specifically effective against other styles -- kinda like rock-paper-scissors.  A mechanism that emulated this without becoming cumbersome would be sweet.

The Rose in Bloom- Roll the to-hit and damage dice together. If the damage die come up with any "petals" add them as a bonus to the to-hit roll. This Technique may be used 3 times per day.

If you don't know how to count the petals this link will tell you how to figure it out. http://www.borrett.id.au/computing/petals-j.htm
(You could also google the answer but that's the cowards way out.)