Talent Is An Actual Thing And You Have It

The Star Trek RPGs assume you want to play a game about Star Trek.

One thing all game products assume is different levels of talent on the part of the people running and playing the game. Talent at what? Talent at lots of different things.

You look at a thread like this and what it's basically saying is:

OH MAN, I bought a sketchpad and the picture on the front was like: 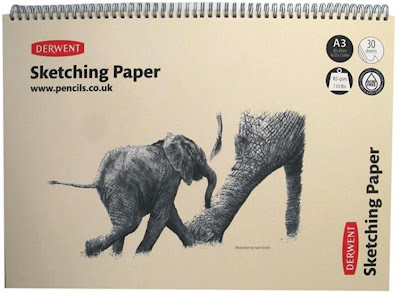 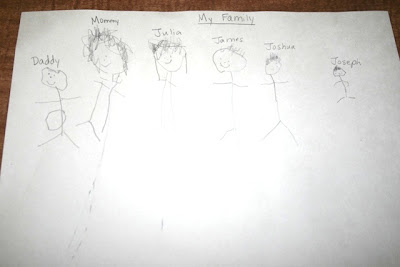 ...this sketchpad is POORLY DESIGNED.

Y'know what would be way better is: 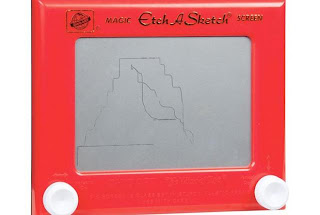 Replace a few words here and there in one of the longer posts and you get...

"...paper is for prima donna artists who don't mind carrying the whole weight of the circus on their own shoulders. I find it a clever observation that paper's reputation and success as a cultural phenomenon is largely explained by the best of the artists being attracted by what it is.

"The Etch-A-Sketch is in fact the perfect device for drawing, I think. Unlike paper, the Etch-A-Sketch is designed to function in exactly the way that paper has to work in practice. It has the auteur artist, and it's motivated by that same "I've got this cool picture that I want to share with my players, I'm going to show them" creative agenda that paper features. Maybe I should try to just take some of the more interesting stencils, run them through an Etch-A-Sketch, and see how that'd work."

The Dongion's analysis of the thread here seems spot on. We've got gamers who don't realize just because a game isn't for them or resulted in them having sucky experiences, doesn't mean it's poorly written or for "prima donna GMs".

Call of Cthulhu assumes a GM who knows how to avoid railroading and avoid pixelbitch clues (i.e. one-wrong-roll-and-the-adventure ends) and players who use the detailed character generation crunch as a way to become invested in the characters and build spontaneous connections. And it assumes a group that appreciates the unpredictability of a world where sometimes biology is the best possible skill to have and nobody at the table could have known ahead of time. And people who don't get frustrated failing, but enjoy the pathos of it.

Trail of Cthulhu assumes different talents: it assumes a GM and players who can (and want to) invest the story and characters with resonance even though they all know (as in any episode of Columbo) the mystery will get solved no matter what. And it assumes players who want to direct the story somewhat, who want to make a decision whether to succeed here or here.

Dread assumes different talents yet: it assumes players who will stay serious about the premise and their attachment to their character and feel the tenseness of their decisions about their characters despite the thin-ness of their connection to them (one short questionnaire for character generation) and the fact that they know that character will probably die that day (it's hard to run a single session of Dread without most characters dying).

One reason people don't get this and so end up writing stupid things is because the people who write the game stuff tend to have the talents that the game stuff assumes you have.

Whoever wrote Dread had (and assumed the audience had) a talent for quick immersion that my home group lacked.

Whoever wrote Call of Cthulhu had (and assumed the audience had) talents for adventure design the rubes on the Story-Games thread lack.

The things Trail of Cthulhu thinks are hard (making failure interesting, creating interesting puzzles for players--not characters--to solve) are easy for my group and the things it things are easy (making players care despite the fact they're being railroaded, making them take psychological stats seriously) are hard.

It isn't a question of always writing for the presumed universal spotless beginner--because Lance Armstrong needs a bike just as much as the kid next door does and that bike does not need training wheels and Lance will be wasting precious time sawing them off.

So, some people need paper, because without paper you will never get: 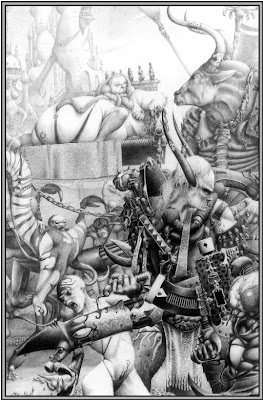 ...and some people need an Etch A Sketch because without it you will never get: 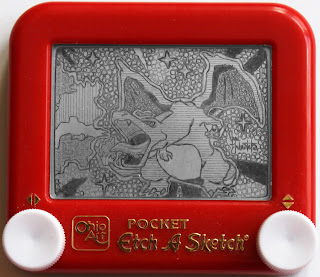 When I make something for games, it has the amount of information I need to turn that into useful game stuff. That's not going to be enough for a lotta people. It's going to be far more than what other people need and will annoy them if they are made to use it and don't need to.

The online RPG community in general produces stuff it needs. Some people complain about that: they don't know what to do with the information that Room 17 contains a well and 16 pig men. They don't understand how that can be turned into a fun adventure. They see it turned into a lame adventure and assume that was the only way it could've happened. What really happened was there was a mismatch between the talent for improvisation that the writer assumed (high) and the talent level the reader assumed (low).

And in gaming, as with most things, you trade flexibility for ease of use. The most flexible game system in the world (BRP) is going to be hard to use and the most focused game (Dread) is going to be easy but more limited. And the respective authors know that. They both did it on purpose.

You know, I think there's a shitload of truth in this. Hulks and Horrors has a shitload of random tables for fun things like star sectors and systems and dungeons because I'm honestly kind of terrible at coming up with them entirely unassisted. but at the same time, I also am really good at improvising like crazy and spinning meaning out of those random results in a way that I know a lot of gamers don't do (and even thus sneer at random generators as nonsensical). I did make an effort to try and 'teach' folks how to create those connections and interpretations that can turn a random dungeon into surprise awesome, but there's only so much a few paragraphs of explanation can do.

So people just assume everything was/ should-be written to cater to their specific needs/ wants/ expectations? What entitled assholes... I guess that should've been obvious, but it wasn't. Thanks for lowering my already terrible opinion of humanity, sir.

While I don't really like DnD 3.x+, I can see what it is made to do, who it is made for. They seem to love it so cool beans, I guess.

An argument along the lines of, "I don't like this because it does this, I prefer that. These, I find, are the benefits of that. These are the drawbacks of this.." would be perfectly acceptable and might actually be useful.

As another example I fat fucking hate the poem "Lady of Shallot" (mostly b/c of the themes). However, objectively I can see its internal consistency and excellent prosody. I just hate the ideas the poem espouses. (Freedom is Death. Conformity is Life. Drink Victory Gin.)

With Story-Games specifically, the folks there have a long track record of not realizing their specific needs/wants/expectations aren't everybody's.
I mean: GNS theory is basically just that "Games that aren't for us are poorly designed"

Ahem, some Story Games guys think OD&D was well-designed for its goals, and D&D 4e was well-designed for its goals as well. Some of them don't care about those goals. Some prefer to pretend no goals but their own exist (but that's not exclusive to them). And some assume that if you're posting on Story Games, you share those goals.
But GNS by itself assumes there are different goals, or the G and S wouldn't be there at all around the N. Granted, it kinda hints that their preference is superior, but most people tend to assume that about their preferred style, and no group that I know is completely innocent about this.

If there are actually Story Gamers with any measure of self-awareness, they do seem to be signally missing from that Call of Cthulhu thread.

Also, "But GNS by itself assumes there are different goals, or the G and S wouldn't be there at all around the N. "