...or you could just roll Gather Information, I guess 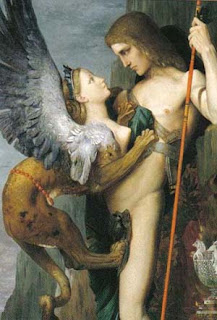 They land in the port of Abu Zin Zeer looking for the white elves who were rumored to be transporting the eye of a fallen god.

But first they hid in an alley and tested out this deck of magic cards they found.

The first card is drawn, a sphinx appears from the shadows in the alley and offers to trade secrets.

Sir Ward tells her who is responsible for the fortress that fell out of the sky onto Nizadd and she whispers to Sir Ward "I'm not real".

This is a Deck of Illusions they've found.

"When one is drawn at random and cast out, an illusion with audial and visual components is formed. It lasts until it is dispelled. The illusory creature will not go more than 30 feet away from where the card lands when it is thrown, but will otherwise move and act as if it were real."

While the rest of the party goes out to scour the local underworld for clues, Anil, cleric of Manpac takes the deck and false sphinx back to the ship.

He has the goblin henchmen build a makeshift stall on the dock from scrapwood and kludge-nails, hangs it with banners and proclaims that for mere copper pieces any one man woman or child can step forward, See the Enigmatic Sphinx, attempt to answer its Arcane Riddle and Be Given--In Exchange--The Gift of A Secret Revealed.

Naturally all the Sphinx's riddles are like "If you were a white goblin prince being trailed by a retinue hauling a package the size of an elephant, where would you hide?"

So it's all brilliant with one hitch--the sphinx isn't real, so she has no idea if the answers she's getting are true or not, and, likewise, hasn't much genuine information to give in exchange, so she's just lying off her ass and so are her customers.