Long story short, the party stole a ship from some bards, killed some pirates, went to Vornheim, which is looking totally post-apocalyptic what with peasant being clubbed in the head with femurs in the streets and all, then went to the Spire of Unspeakable Hogs and were told they had to face a Time Demon and extract from this creature a promise to turn back the clock for the city.

So they had to fight future versions of themselves.

This was insane and took forever we had a lot of new players over the last few weeks and whenever any of them went off on their own they got bushwhacked fairly immediately in short order. It was looking fairly grim. However, the players prevailed with no help from Connie who was too excited about this pink goo she found that allowed her to gain anyone's memories by eating their brain. 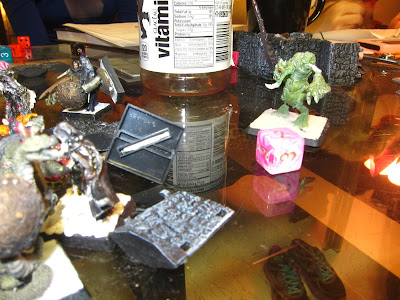 The second session was a serious drain on my GM processing power. 8 players, 2 brand new players, 2 kinda new players, high-level 3.5 spells, analogues of ever PC, a complex tactical situation, a complex narrative situation "Ok, so there's this city, right, it's called Vornheim and there's this army of skeletons and..." and Adam G+ing in over vidchat.

But anyway the city is now (roll roll) back in time 2 days before the skeleton invasion. The horde ranges on the horizon.

"Like it was a few days after you guys decided to go to the beach. The city has reassembled itself, the skeletal army has vacated and is now a mere cloud on the horizon, 2 days off."

Zak, I commend your processing power as it all seemed to run pretty smoothly. Though I can't quite figure how we managed to wipe out the rest of the "Future PCs" as easily as we did. Perhaps some combo of the dice going our way and our success in knocking out Future Mandy early.

Future Mandy was less shrewd than Present Mandy, and did not count on Present Connie and here keen elf ears hiding behind that skull.

Also, while Future Connie was knocked out by Present Darren but future Darren was nowhere to be seen in round two because Real Darren couldn't make it to the second game.

Seriously, only problem I can see is that where the hell are you going to take this game now? :D Both D&D and AD&D can get pretty ridiculous if you let them. You have a bunch of new players and the first thing introduced was time travel (Spelljammer anyone?). And the number of players seems too much for one DM to enough attention.

I do not envy your job. Brave shit, man. Try to keep it together and good luck :D.

Having to kill your evil future selves is comic booky and awesome. So when to the horrible consequences of Connie eating the future Mandy's brains come back to bite her in the ass?

The defeat of the future party was inevitable,as how can you kill the past you without killing your present self? The problem now is avoiding their own inevitable deaths at the hands of their past selves.

I'm predicting a trip to the Metamorphosis Alpha cloning chamber, using future Mandy's brain foreknowledge of the location of course.

Well I reread it and found out why the past self ended killing the future self. Man I am stupid. Now the wiser question would be how are they going to survive in the future with the full knowledge that they are going to get killed by their past selves?

I learned from Dr Who that time paradoxes basically mean: write whatever you want.

And yes, some were levelled up. and they still lost.