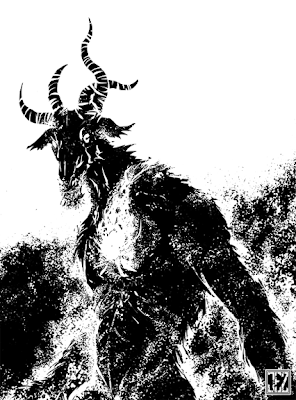 1. An adventure module by Zzarchov Kowalski. Dark secrets in a quiet town, devil cult, some interesting magic items and spells, works with any TSR-era D&D or clone or the author's own system (Neoclassical Geek Revival). Whimsy and disgusting death. Written by Zzarchov Kowalski.

2. The sparse art is the closest I've seen to Sin City era Frank Miller illustrating a D&D module. Jez Gordon did it. He also did that cool map in Qelong. He also plays Man Rider. He is becoming an impressive figure. Why Zzarchov didn't have him do the cover I'll never know.

3. It says "OSR"in it a lot. Most consumers are not going to know what "OSR" means. Unless we assume only the kind of people who'd read this review and so probably know OSR stands for Old School Renaissance (of TSR-style D&D) would ever pick this module up. Which might be true.

4. It is efficient, engagingly written, mechanically solid, and there's a sense of...anticipatory and ominous giggling?--as if the man with the banana peel knows that when you slip on this peel when there stars are in just this position, the laughter will rend the sky.

5. This is integral to recognizing it as special: if you get the joke and dig it, then it's going to seem like clever mischief. If you don't, it's still absolutely playable: there are factions and red herrings and there is a small dungeon with obstacles that would entertain any group I know for an hour or two and it's very possibly still worth your four dollars and your twenty seven cents, it just won't stick out as being terribly unusual.

6. If you like both of these and you like that both appear in the same thing, you'll probably like A Thousand Dead Babies (spoilers--highlight to read):


A SMALL LEATHER POUCH FILLED WITH TEETH
The teeth in this bag are all from an adult human (or humanoid). There are 23 teeth in total, all but 4 are charred. Burning a tooth will cause a billowing cloud of fog to fill the area with 75 cubic feet of fog. They quickly become damaged if exposed to light.

This is a two foot tall rolled up piece of human leather, tied shut with a bloodstained piece of twine. It contains a spell to enlarge a goose into a monstrous bloodthirsty. . . goose. The spell appears to have originally been recorded as a tattoo that someone decided to remove from its previous owner. The spell is called Dire Goose.