Warlords of Vornheim Is Really Fun To GM 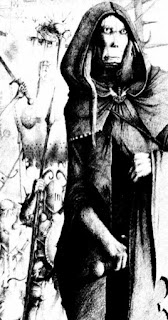 Satine Phoenix, our recently resurrected rogue, is in Time Magazine talking about D&D this week and that's a keen transitiom because this D&D story starts with her.

Because a year and a half ago, she told me "Have you seen Google +? It's got free multiperson videochat on there!"

So then we started playing games.

Then the gentleman known in gaming circles as Calithena had this idea and he told me and Jeff:

Why not use these hangout games like the old games at the very beginning of the RPG hobby, when players carried their characters from game to game, wherever they could find a dungeon master?

So we got together and talked about it and I came up with a stupid acronym and FLAILSNAILS was born.

It's been fun. A couple personal favorite FLAILSNAILS moments:

-A whole party getting killed captured in Arcadayn's Castle Amber game and then sending out the call across Google+ on a Sunday morning to get together an all star team of PCs from all over the world to come rescue them (successful).

-Playing a dungeon in Ckutalik's Tekumel game and seeing a dead adventurer, then using Speak With Dead to talk to the dead PC from his real-life game in Texas and ask him where the traps were.

So FLAILSNAILS is one fun thing.


A second fun thing was that Deathmaze player-vs-player game I ran the other day.

I have no idea how much it resembled actual early D&D or Chainmail but it certainly seemed like every theoretically boring element of the early version of the game suddenly made more sense than it ever had in that format. All those 10x10 rooms with nothing but one monster and one treasure...

Putting a few simple elements together with players out to kill each other resulted in a frantically complex and exciting game without even trying.

-Didn't need a lot of rules because players knew the GM was making it up as he went along and trying to be fair.

-Didn't need complex tricks or traps in the dungeon because the enemies themselves and the crowdedness of the dungeon made each encounter complex in itself.

-Didn't need varied "moves" for PCs because directly attacking someone was only one of a few things you could do and was always a crapshoot no matter who you were.

-Only being able to use an effect/spell once was fine because it made a huge difference overall.

-Fighters' slightly better hit points and to hit bonus kept them in a fight consistently a few rounds longer than a thief and modified their tactics in obvious ways.

-Simply having items lying there alone in a room made sense and was useful. You grab it and move to the next room as soon as possible.

-Ranges didn't matter because range is always "across the room".

-Didn't need monsters or NPCs because the players were the monsters and NPCs.

-Sketchy room descriptions encouraged desperate characters to ask questions about the rooms when they were running out of ideas but let the room just be a room when they were feeling ok and moving fast at the start of the game.﻿

In other words: I got a lot of interaction and intercoonectedness out of very little prep. Kind of the holy grail of GMing.

So then after the second Deathmaze game I stuck the two together:
player-vs-player plus experienced FLAILSNAILS PCs in Warlords of Vornheim.

And, man was it fun.

No prep. Just map and set the PCs loose in two teams... 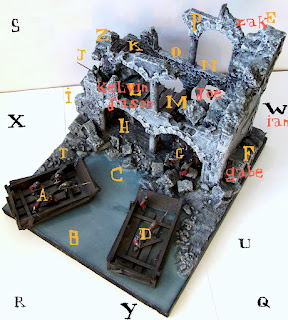 Ian hauls out a catapult from behind a building to attack Joe.

Joe's PC, who has picked up 5 levels in three different classes over the past year, fireballs Ian.

Ian survives, the catapult makes its save, and Ian rolls a natural 20 to hit Joe with it. 42 points of damage. Joe's long lived PC is gone, instantly.

And that's the first round.

It was like playing Magic: The Gathering with all the insane magic items GMs have been handing out to their players in different campaigns all year long. I counter your flaming sword from with....dragonscale armor!

But way more than that, there was this great level of incidental detail and history you got from bringing all these characters together from all these different worlds.

(I didn't have to invent any monsters or traps to run this game but I did have to use 3 different rulebooks from 3 different games plus someone had to call another GM midgame to figure out what their chaos venom did. )

And a lot of the "story" isn't just in the games but between them. Everyone constantly playing makes this weird kind of community of PCs...

+Trent B I think we have a classic "Power Trio" if we add in Manning. Sort of like "Star Trek" if Spock was a heroic-evil murder elf.﻿

Being a little loose with 'evil', but it sounds more dramatic than 'selfish'.﻿


Also I'm not comfortable with 'power trio'. Sounds too much like we need to wear uniforms. Colourful uniforms.﻿


The really unanswerable question is: what fools could possibly be brave enough to fight us?﻿


I think Manning and Ward share the honour of being the worst jousters in the multiverse....

So I guess, to answer your question, anyone with a horse.﻿


Oh wow. Just read the actual rules. I thought it was a murdermaze variant but its flailsnails! Sir the Fist is back! ﻿

I think in every single RPG a big part of the fun is everyone playing gets to write part of a story and then just gets to sit back and watch it finish writing itself. I've never seen that happen as efficiently as tonight.

People who make narrative games often talk about trying to make a game feel like a great movie.

This kind of extended, overlapping, centreless story with a million characters thing FLAILSNAILS does is making the G+ universe feel like a TV series. A really good one. On HBO. That you can't shut up about.

I would like to declare Malice Aforethought--Cutthroat, Wyvernsbane, Slayer of the Eye Tyrant, Strategos of the Mauve Legion and Lord of Murder--the undefeated heavyweight champion of Warlords of Vornheim and the FLAILSNAILS universe.

Warlords of Vornheim, look out: we're in the top spot right now. Vorn's city lies undefended before our chaos horde, and we're gonna run things just how we like. Stay out of our way.

2
1
You only beat me due to your cowardly hiding in the shadows. I fought like a true man and you fought like a sneaky show hiding terrorist. Depending upon waves and waves of commie sympathizers. Socialists like yourself are always looking for handouts and you had lots of back up. Gimmli and I fought to the end while you used your evil minions to lay siege upon true patriots, you jerkhole. You only defeated the Sir The FIST OF JUSTICE by a cowardly attack. As Teddy Roosevelt as my witness I will make sure this treacherous and unsanctimoniousness will be remembered.

I have seen true evil and its name is assassin.﻿

Zak Smith9:29 PM (edited)Edit
+
2
3
2
The Council of Vornheim insists the Civil Defense Subcontracting Office is doing "a heck of a job"﻿

If only they'd stop fucking up my setting--they're almost as bad as my players at home. Don't these people know I'm trying to sell books here?

Or, better yet, run a game so I can play.

I've never really played old school dnd. You think I could still run something? I should probably get some experience playing first. Thank god a couple of weeks of free time start today. I want to get in on this!

This really, really brilliant. What an idea. If it really takes off the "league play" elements of it could be fun as hell.