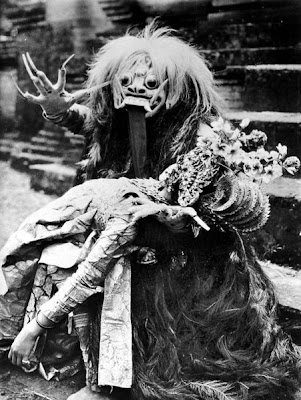 Rangda, The Widow, an alternate aspect of Lolth is worshipped in Drownesia, land of the dinosaur-riding princes. Like Chamunda, she haunts cremation grounds and fig trees.

Rangda is the demon queen of the leyaks (that's penangallans or vargouilles to you, gamer) in Bali, according to traditional Balinese mythology. Terrifying to behold, the child-eating Rangda leads an army of evil witches against the leader of the forces of good — Barong. The battle between Barong and Rangda is featured in a Barong dance which represents the eternal battle between good and evil.[1] Rangda is a term in old Javanese that means: 'widow'

Her voice and manner closely match that of the star witch Haggar, creator of robeasts.

As for the Penangallans themselves...

The midwife keeps a vat of vinegar in her house. After detaching her head and flying around in the night looking for blood the Penanggalan will come home and immerse her entrails in the vat of vinegar in order to shrink them for easy entry back into her body.

The best way to keep them out is to surround your house with thorned plants and pineapples, and women keep scissors or betel nut cutters under their pillows--the drownesians use golden barbed wire.

One way to get rid of a penangallan without fighting it (at least temporarily) is to find its body and put broken glass in its neck, but this only makes the problem worse.

The penangallan then seeks out a giant spider, throttles it with its entrails, decapitates it and attaches itself to the body, thus creating a drider.

this is the most I have liked drow

And this video
http://www.youtube.com/watch?v=cBobq6gnOWc
features Rangda.

I agree with scrap. I'm almost mad that you can find a way to make them cool, but it's overshadowed by how glad I am that I don't have to now.