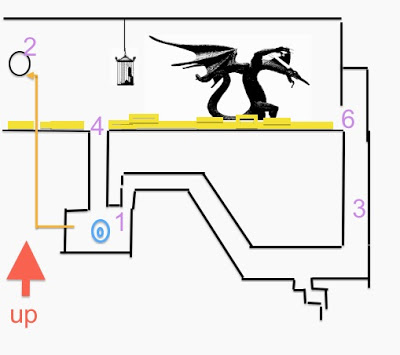 If you're like me, you often ask yourself, Why aren't my players all dead yet?

The treasure hoard of mighty Ferox is, as of an hour ago, minus one Greenminister's Guide To The Flora And Fauna Of Cobalt Reach and the world still contains the same number of living souls as it did yesterday. How did this happen?

-Ok, so Connie/ Gypsillia the Elf Thief is in the weird dragon egg chamber. In position 1 above and  illustrated below ... 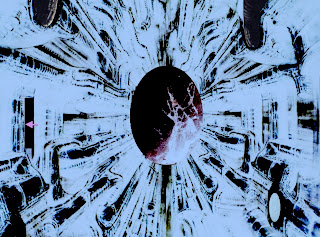 ...as per her instructions from the Clone Lord, she smashes a small glass hypercube on the egg (don't ask, just trust me on this one) this makes space in the egg chamber all weird and Escherish.

-Now Adam/Brian the Wizard starts poking around the chamber and accidentally falls into the passage leading from the egg chamber (1) to a hole looking out 30' above the floor of the dragon's treasure hoard (2). Yes, you can fall up here.

-So there's Mr Wise and Cautious Squishy Wizard: he sees a demidivine breathing azure mountain of dented scales (not noticing him yet), an ocean of Type H treasure, and, oddly, the Pope of Vornheim, hanging in a gibbet.

-(Pope present courtesy of an idea I got from Heikki, here.)

-Connie breezes past "Whatcha got here? Dragon treasure? Cool..." and begins to immediately climb down from (2), move silently and sifts through the hoard. She finds a valuable book.

-Mandy/Tizane the Cleric rushes off west from (1) and begins climbing up a previously discovered shaft (3) up toward the hoard, invisibly. She uses the slow but safe "climb, spike, tie waist to spike, climb another 20 feet, spike, tie etc" method.

-Meanwhile the Pope notices Connie. He's all emaciated and like "Hey..."and the chain swings and the dice roll and the dragon turns around.

-Connie runs back up the rope to 2 where Adam is and they both start running back through the passage to 1 (not realizing the hole in the hoard at 4 leads there yet).

-Dragon can't fit into the tunnel at 2 but can look through the hole at (4) and does. Connie notices he's up there, Adam and Connie pause at the edge of the tunnel, fearing to enter the egg chamber.

-Mandy continues up the shaft (3).

-Adam and Connie go invisible and spider climby and head back toward 2. They arrive and see the dragon (roll roll) still using its serpentine neck to check around the now hypercubed and megadimensional egg chamber. From their point of view at 2 the majestic beast looks like an ostrich with its head in the sand. Who is fucking with my egg and pope?

-Connie wastes no time invisible spidering up to the ceiling to see what's up there.

-Adam, very low on spells, sits responsibly at (2) agog and wonders why he hangs out with these people.

-Meanwhile, Mandy, nearing the threshold at 6, fails a climb roll. She clangs against the wall (invisibly) in her armor, 10' below the entryway to the hoard.

-The dragon's head jerks up on account of the noise and it makes its way over to 6.

-At this point Connie reminds everyone of her and Mandy's plan (is it a plan if it only has 2 steps and the second step is "just go from there"?) from last week to throw a vial of mirror water* down beneath Ferox at an opportune moment.

-Adam shakes his head and tries not to cry, briefly considers rescuing the Pope, decides against it.

-The dragon looks down the shaft (3), and sees a dangling rope on a spike (Mandy is still invisible thanks to the ring she picked up in Death Frost Doom) but smells girlflesh.

-Ferox leans down and hauls the rope up.

-Mandy makes a difficult dex check to let go of the rope at exactly the moment she passes the lip of the chamber.

-Dragon tosses the rope away. So she's standing right on the edge of a 150' drop, about 4 inches from the dragon. If Mandy wants to get away she has to go past the dragon now. Or jump 150 feet...

-Connie continues to crawl, invisible and spiderclimby, Feroxward from behind.

-Adam prays to all sympathetic gods.

-Mandy stays put and spends a turn invisibly slathering herself in Stenchmold**, courtesy of the Dungeon Dozen.

-Connie, now in position, throws the vial of mirror water toward the only flat surface in the room--the threshold of the hoard, right on the edge of the drop, at (6), right in front of Ferox, right next to Mandy.

-Ferox rushes forward to investigate the awful smell plus shattered glass (Mandy is right next to the puddle of mirror water) and immediately gets a faceful of black lightning from the antiFerox dwelling in the mirror dimension for 24d8 (97) points of damage. Ferox wildly flails outward at whoever is around and misses.

-Mandy books across the room. Invisible footprints clink through the hoard.

-Connie begins to crawl back across the ceiling to (2).

-Ferox gathers a small pile of coins and shoves it toward the puddle of mirror water, cleaning the pool up and sending the puddle and coins down the shaft, then he takes an action to blindly tail sweep across the hoard in a rage.

-Mandy dodges it and uses her next action to ride the wave of the rippling coins 60 feet closer to (2).

-He growls at the Pope and asks what the fuck is this business while casting a spell which creates a ball of magnetic force sucking any nearby metal that isn't gold into a big 12' diameter Katamari Damacy ball at his feet.

-Adam and Connie are safe because the force of their Spider Climby succeeds in a roll vs Katamari, Mandy is sucked into the ball for 22 points of crushing damage, but is still invisible.

-(Roll roll) she's on the bottom of the ball.

-Ferox picks up the ball to inspect it.

-Adam, who has been holding his action forever, casts an illusion spell--Major Image--and makes like the anti-Ferox has climbed up the shaft at 3 to attack again.

-This fools Ferox for exactly one round, since according to the language in the book Ferox doesn't get a save to disbelieve the Image until he interacts with it.

-However, this is long enough to allow 2' Mandy to dash to the rope beneath (2) and get hauled back up. At 2' tall even the wizard can haul her up.

-They run back through the egg chamber but Ferox has a hard time getting to them because they are invisible, hiding behind the egg (doesn't wanna hurt the egg) and the room is noneuclidean so like one claw reaches in and then like 4 claws come out at all different angles. Connie get past no sweat and Adam, piggybacking 2' Mandy, gets by with a relatively minor claw wound.

-Aaaand then they're back to where Ferox can't fit. Mandy collects her reward from the Clone Lord (a custom clone, brain not included) and the party collects xp for the book Connie stole and the T Rex they killed earlier that day.


*"Mirror water. If dropped, opens puddle-shaped portal to anti-dimension. Anyone seeing their reflection gets attacked by a double who crawls out a la a Mirror of Opposition. Puddle can be cleaned up as normal."

See, this is why I really miss 'I Hit It With My Axe'. Would have been amazing to see all of this play out!

And that's how I'd define "cinematic": you guys created something that looks awesome in the mind's eye but the threat of total disaster was palpable throughout. Good, three-dimensional thinking by the players and a very fun read.

I seem to remember your players foiling your best laid plans with the Medusa in I Hit it With My Axe as well:).

No plan or adventure survives once the players get their hands on it;).

Really cool ideas that they all came up with to thwart the dragon.

Wait, you wonder why your PLAYERS aren't dead yet? Do these escapades of theirs really drive you to such homicidal extremes Zak?