Why is sexism in the game world blamed on pictures and games instead of things like economics, power dynamics, unequal distribution of decision-making power, hiring practices, Cold War era education priorities, history, and other far-ranging systemic stuff?

(Or substitute, say, "is sexism in the game world" for "are mass shootings".)

People are stupid and are more confident and excited about having opinions on simple things than complicated things.

First mentioned in Cyril Northcote Parkinson's 1957 book Parkinson's Law, and Other Studies in Administration,[3] which has subsequently seen many editions, the concept was presented as a corollary of his broader "Parkinson's law" spoof of management. He dramatizes this "law of triviality" with the example of a committee's deliberations on an atomic reactor, contrasting it to deliberations on a bicycle shed. As he put it: "The time spent on any item of the agenda will be in inverse proportion to the sum involved."[3] A reactor is used because it is so vastly expensive and complicated that an average person cannot understand it, so one assumes that those that work on it understand it. On the other hand, everyone can visualize a cheap, simple bicycle shed, so planning one can result in endless discussions because everyone involved wants to add a touch and show personal contribution.[4]

And for those of you hoping this was about Keith Parkinson... 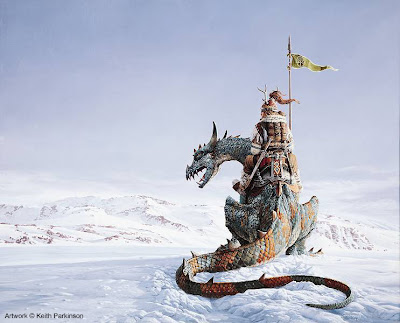 What brought this up? What do your players think about D&D art and the like that is so often a center of this topic?

I know sexism in gaming has roots precisely as complex as sexism in the wider culture, but isn't there an argument that overtly sexist art (for instance, art which tends to sexualise women far more than it sexualises men) qualifies as one of the more unpleasant and obvious manifestations of that sexism, and can tend to make it harder to reverse the trend (not least because there are a lot of reactionary people in geekdom who get mad at the idea that a diet of all-cheesecake all the time is somehow not good for their hobby, whether you're talking gaming art or comics or whatever)?

Those really are great shoes.

I followed that link and totally laughed my ass off. My wife is like that. She's the one that wanted to start buying Royo calendars.

The sketch which Wikipedia mentions also has an interesting line in it where the one member of the committee who does understand the reactor plans thinks about how long it would take to explain it all to the rest of them and decides instead to say "I have no comment to make". I think this is a major factor in these discussions - those who do know do not want to spend the time explaining. Whether this is a fault, cynicism, or simply a practical reality is debatable but it makes it easy for those who have the time and energy to waste to simply bulldoze through their opinion. Which brings us back to Wikipedia, of course.

Uhm. I wouldn't say sexism in the rpg-hobby is blamed only on pictures. Most people I see that criticize pictures, seem to be fully aware of "economics, power dynamics, unequal distribution of decision-making power, hiring practices, Cold War era education priorities, history, and other far-ranging systemic stuff".

Most of them, however, cannot do anything about any of those, whereas they actually can do something about the pictures - or at least about raising awareness...

(That should not be taken to mean that I find all criticism of pictures depicting semi-nudeness et.c. to be relevant and accurate, but I think you are trivializing the question just a tiny bit to much...)

I have a librarian friend who is often intelligent. She is blase when I complain about things such as civilians slain by U. S. drones, the insane rate of incarceration in the U. S., police brutality and TSA enormities, etc.

But when I casually mentioned that my 8-year-old daughter has several Monster High dolls, it was a BIG DEAL. "Don't you know those dolls make girls have bad body images?"

It's flabbergasting. She's not bothered by states killing, caging, and otherwise abusing real people in the real world. But she's bothered by dolls.

That argument exists and is, obviously, incorrect.

The problem is _stupidity_ of which _sexism_ is merely a genre.

The question should be trivialized.
Pictures never made anyone stupider ever.

and, of course, you can raise awareness of a real problem (sexist behavior) without creating a new problem (demonization of art and artists)

In fairness, though. Monster High dolls are pretty disturbing. Venus McFlytrap's parent is listed as "The Plant Monster". How would that even work?

Well, but the stupidity-argument goes both ways. It might possibly be that maybe even a majority of those who talk about sexist pictures, really blame the pictures as a _cause_ of sexism in the hobby.

But the other part of the conversation is equally stupid and wouldn't understand a power dynamic or socio-economic factor even if they showed up and rolled for initiative.

So no, there might not be a way to raise awareness without pointing to something simple - a graphic representation that share some common elements with the problem at hand - and say, "there, like that".

"Raising" awareness usually implies that it is pretty low to begin with.

And yes, it might demonize art (and by implication artists). Some may misconstrue the entire problem as a question of sin, the solution of which is to ban the art (and artist!). And so on.

But all of this might also be blamed on stupidity - and not the question whether there is some such thing as an intrinsically sexist picture.

So long as no one ever calls a picture or artist "sexist" just because it is a sexualized picture then the problem can be completely avoided.

There is _real_ sexism and hard evidence of it. Pictures aren't that.

All it needs is more tits.

I tried to find a good Parkinson bikini pic of course, but he's hopeless with human skin and facial expressions.

"Pictures never made anyone stupider ever."

I dunno. What about propaganda posters? Are you saying that visual works never affect the thoughts of the viewers? Isn't all art based on the concept that the artist can in fact inspire a change of mind in their audience? Or at least, doesn't all art have that belief as part of its foundations?

Looking at this question without first setting it in context isn't very useful.

No WONDER you pointlessly ragged on my peeps. You're a puritan. I get it now.

If you are an adult believe something presented as fiction, like all RPG illustrations are, you are stupid _to begin with_. The picture can only change the _genre_ of your stupidity/

If propaganda _presents itself as fact_ ("Jews ate 90,000 babies last year") that's a WHOOOOLE other thing which RPG illustrations rarely ever do.

Kid sure has his moments

Right; with you now.