If You Can Make a Better Dungeon in Under 2 Minutes, The Next One's Free

I've patched the following one-shot room-by-room, using contestant entries for each room, authors of the relevant ideas are in parentheses...

Vornheim Home For the Treatment of Distracted Young Females 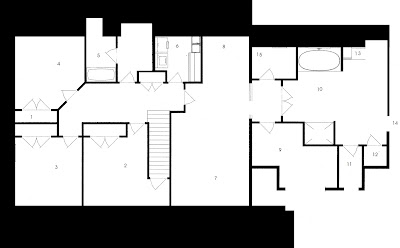 It's an all-girl mad house. This is the top floor. The prisoners have recently escaped. Of particular interest are a pair of insane witch sisters of Akira-like power. They are randomly altering fellow prisoners, guards & sections of reality.

14. (Outside)
(Marc)A ginormous garden. The only way out is to get lost.
(Roger the GS) Hole in the ground. First an arm with a right hand comes out, 3HD, AC 7, hits for 2d4 damage. Then an arm with a left hand (same). Then a leg with a right foot (same, but hits at -2). Then a left foot. When you kill the arms and legs a head comes up, you just have to whale at its 4 HD AC7 until it's dead and then like a gumball machine 600 gp fly out of its dome.

9.Completely wrecked from eldritch explosion. (Tom) Lords (9Ftr)(former guards, made mad) sparring for the hand of an amoeba (marc)--which is made of (Duglas) dirt & melted glass--resulting from said explosion. They've been cursed, and will become (wickedmurph) weretigers, but don't know it yet.

10. Bloody slime everywhere (wickedmurph), bloodstains (TrentB), flies (me), steampowered machinery (Chris Weller)(The Cramp) (this was alchemical and exploded, releasing the slime which causes wild-magic effects), green slime (IHaveTilFive), dried remains (Duglas), half a woman in a pool of slime (C'nor), Ladies sparring (Tom)(upper-class lunatics arguing over who caused the explosion and maimed their friend). This used to be a healing mineral steambath for the patients, one of the baths is intact but the water's been turned into a water-weird (with scalding abilities) by the explosion(Ben L). It will not be apparent unless someone enters the bath.

In the corner of this room...

13. Comfy chairs (Chris Lowrance)--if the entire party sits in one of them at once they will break through a weak spot in the floor and reach the rest of the asylum below (Chris Weller), the other one has the remains of what was once an inmate eating porridge (TrentB), his face is on the wall (wickedmurph).

Through a door there's...

At any rate, it will be furnished with: semen in an aquarium, swimming (me)(they are of various random species and one of them will fertilize any egg of any kind placed in the aquarium)(the resulting hybrid beast will grow to full maturity in 5 minutes), and the walls are lined with psychological textbooks, but now they are all blank (Chris Lowrance).

Going deeper into the madhouse from (10.) brings you to a large room. (TrentB)--This used to be a dining room. Table covered in blood. Two broken chairs. One untouched. The inmates have turned the left half into a...

7. (Marc)--Jousting arena. Everyone mounts pigs and weapons are odd-shaped snakes. (Chris L)--there are teeth all over the floor.

Amid this lunacy, and into the right half of the room, some inmates are (Chris w) bowling. Behind the pins there's...

8. (JDJArvis/Chris W)a horrible giant tapestry made of woven spider silk by one of the former residents (now a zombie) showing a treehouse in back yard. It's (Wickedmurph) a mimic. (It has 9HD however...) noticing the two matching snowflakes on the painting (this is Vornheim, there's always snow) will cause it to revert to an ordinary art object (me).

One of the jousting pigs sits here on a jeweled stand--he is a polymorphed king (marc) from a distant land.

Behind the painting is an area of nothingness. Anything touching it ceases to exist and the world forgets it ever existed (TheCramp).

Upon close inspection, the teams of inmates jousting here will be revealed to be simulacra reconstructed by the sisters out of guilt (they slew them in a rage, early on) using the nearest available materials--one team is made of vegetable matter (from the garden), one half is made from machinery (Duglas). (Sounds totally like a Star Trek plot.)

Beyond that, there's a hallway, radiating rooms...

2. This is where the sisters keep a series of brass gears controlling the Idol in the next room (3)(marc) the sisters have protected it with an insane pit trap (ben L) leading to a pit full of cats that explode when threatened (C'nor) and, (by way of warning) a dead dog(me). Also in the pit is a stoned flock of cockatrice, a trap tile unstones them (chris L).

3. Iron idol (Ben L) on a dais with a mouth carved into it (chris weller) surrounded by a mud pool with bits of women's clothing floating in it (marc), an otyugh lies beneath the mud (IHaveTilFive) and a stoned Basilisk, real, but actually stoned: bleary eyes, etc., gaze half-effective due to red eye, bobbing half-drowned in the mud (Chris L) and a victim of it, frozen mid-scream (TrentB).

(The other inmates were drowned in this mud to create the idol.)

The idol and the mouth will answer one question per person. The mouth always lies, the idol always tells the truth. The gears in room 2 work the idol. This used to be the sisters' cell. They built the idol to counteract the lies coming from the mouth (which drove them mad, so they say). They want to ask it where the 3rd sister has gone, but are currently occupied elsewhere.

6. Kitchen. Covered with rotten oats and fungus (TrentB) hospital kitchen and food-requirement records. Careful examination of them explains everything (IHaveTilFive). The floor's covered in redworms (Chris L) crawling into a hole which is actually a portable hole (TheCramp) the witches' familiar, an imp, cowers in the oven (wickedmurph).

4. Inmate's room. Recently used bedding, stained with a few drops of blood.(JDJarvis) An Axiomatic Dragon (C'nor) (8 inches long, curled claws, grey, lying in the middle of the bed) holds court here, feasting on a box of dead wolves (TheCramp). If the PCs do nothing, nothing happens. Every action by any PC while in this room results in an action of like duration by one of the dragon's courtiers. They are: a giant snake (Ben L), 4 harpies (Tom), a humanlike praying mantis that resembles a pretty woman with a hungry look (marc), two elf women that won't stop singing (can't?)(Chris L), and impossible rats (wickedmurph)(they can -only- do things rats can't).

The elf women are the mad sorceresses responsible for all this but they've cursed each other so they can't stop singing long enough to get anything done and they've accidentally summoned the Axiomatic Dragon, to whom they are now enslaved.

1. A statue of a basilisk and a flock of cockatrice locked in deadly combat. Not real.(Chris L)...In the middle of 50 dessicated heads. All the heads are from non-existent beings(Marc). Poison snakes slither through the scene (wickedmurph).

When I saw "WC (Chris Lowrance)" I worried that was going to be my only immortalized contribution... which would have figured.

Hahaha... so good. I think my contribution was assorted corpses and bloodstains which, I guess, is pretty much exactly what i stocked the place with.

I think we all owe it to one another to run this amalgamation for our players.

Incidentally - the 'nothing' behind the painting is something I've done before kind of... was more of a portal that took people to some other existence, but still erased memory of their previous existence. Everyone ended up going through the portal, which makes sense once you start forgetting about the people disappearing before you. Could be dangerous with this one though haha.

This is a seriously fucked up house though.

I'm pretty sure Rogers limbs/head/hole/gumball machine guy would freak the hell out of me as a player. Im imagining this guys head just being confused and horrified and appalled as these guys just kick the crap out of his face for no good reason. He has no idea what he is doing there, half stuck in this hole. Excellent stuff.

Very Lewis Carroll. I like it! If I'd known we could have contributed individual rooms, I would have joined in. Ah well, next time.

Neat! Yeah, I could see dropping this into one of those Dungeonland modules by Gygax.

I was wondering when I put in a half a woman in a pool of slime. I'm guessing that was the Tailless Mermaid? Also, will there be another one?