This Dungeon Was Designed In 3 Minutes 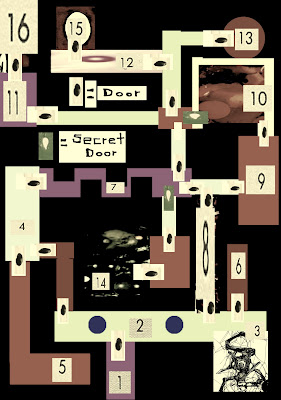 This dungeon is entirely vertical. (K) The bottom is down, the top is up, the left is west, the right is east.

The Forgotten House of C'ielrak

Demogorgon's realm is composed entirely of the bodies of lesser gods he has slain. This is one of the lowest houses, once belonging to one of Demogorgon's concubines (a horrific eye-creature). Largely forgotten. It intersects our reality at one point...

1.Behind a nondescript door in a nondescript alleyway, steps head up into the dungeon.K The jagged stairs are ice TC (the ice is made from frozen tears), the gates, as rest of building, are made of blocks of frozen blood CL

3. Horror eye-creature (emptied physical remains of concubine) stuck to wall with spiderweb. 3 Spiders feeding off it. scuttle away when disturbed. TB

5 Storage of flesh (which is feed to the moss.)TC Dead end with giant worm and 500 gp R.

6 Lost children. D (they wander here, if their parents are wicked and the world does not care for them). They tend and feed the Spider Queen's (replaceable) Heads TC (if you've ever wondered where the spider queen keeps all her heads).

7 Twisty passage--chance of insanity R, due to: singing floor in this mirrored hallway TC--(step creates notes, each one a different distorting effect)--paintings of art critics
that move, critique passersby CL (carping lesser demons, banished here shortly after The Fall, they could do naught but criticize--they will savagely critique PCs roleplaying)
(secret door is behind the last painting)

9 Three wizards (The councilors. D) in red black white robes sit contemplating. Don’t disturb! R (they are millennia-old, they are meditating on how to safely approach the upper reaches
of Demogorgon's realm) they have been contemplating bottled memories stolen from the elderly CL (former adventurers who failed) and a partially annhihlilated thaumaturgic hex sign Z
for hundreds of years. They will caution the PCs to go no further, but each has a 33% chance of being able to answer any questions about the Realm the PCs may ask.

11. A slime lord 99 Z made of purple mold H5 banished here. (It will attack, may bargain for its freedom, but must devour one level from a living creature per round whilst outside this
chamber.)

13 This bottomless pit (shown on map from above) is flooded. Somewhere a Sea is missing. TC 4 miles down, the mind of the dead concubine (insane)... talks a lot. D tortured eternally on
a rack of unknown and unanticipaable tortures Z the only other "living" thing here is an Undead Wererat with No eyes. Walls clawed to hell. (shredded suit and filth.)TB above the water level
are spiral stairs which open up behind a bookcase in the city library. K

14 Above: Floating Eye-blobs of darkness. Repel light. Steal Dreams. (1% chance of going mad per round spent in the chamber every time PC sleeps forever after) TB
Below is: boiling oil. Eruption chance.D (beneath the oil is the) chronogrotesquerie Z (banished here because it was too chaotically disruptive even for the Demon Prince,
it is dangerous, but its time-alteration abilities can perhaps be harnessed by PCs if they feed it properly).

15 A spherical room made of a smooth white substance (rune-covered flesh-TC) An item of great value hovers in the dead centre of the sphere. K Properly reading the runes allows
passage to another part of Demogorgon's realm. Improperly reading them causes madness. The item (an anticrystal) was dropped by His Majesty...

16 His Majesty (is a perverse mage. Chaotic Evil.)TC eating a death bone beetle beast feast Z (the mage was once one of the councillors in room 9. He became impatient
and ran ahead, went mad, and is convinced that he is the ruler of a vast empire and that this is his throne room. He fears the slime lord outside and has been "feasting"
on undead insects for decades.

"Demogorgon's realm is composed entirely of the bodies of lesser gods he has slain."

Worth the price of admission alone.

And man, (1% chance of going mad per round spent in the chamber every time PC sleeps forever after) is an excellent interpretation.. Thanks!

I'm not sure I was thinking on the scale of "this dungeon is entirely vertical", so that's just as much you as it is me, but I appreciate the nod anyway.