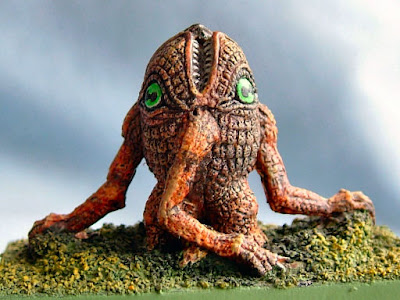 It doesn't make sense that a word would start with "X"--so, by extension, the "x" monsters are artificial, alien things that make no sense.

These Monster Manual 2 beasts are magic living matter/anti-matter balls with tentacles. Not as stupid as they could be, not as full-on freakish as the Xorn.

They're a little abstract for my taste, though the comments for these posts have included so many good monster ideas that I bet one of you out there has thought of a nice spin on the Gygax-anagram monsters so I'm gonna sit back and see what y'all have to say in this case.

The Xorn is so weird and makes so little sense that you have to give it props just for that-- it comes from the elemental plane of earth to here to mug people for their precious minerals. Implying:

A) Things like gold and rubies are hard to find on the Elemental Plane of Earth, and

B) It can't just use its move-through-stone power to collect them itself.

Plus it "moves its molecules" around plus it's called a "xorn" plus it looks like a stone Humpty Dumpty with a nose-arm and a mouth on the top of it's head. Seriously, someone was like "Hey, there's a monster in the Manual for every letter but X--let's take drugs until we think of something!"

I just can't get past the new name for the Xag-Ya family is 'energon'. I just keep imagining two factions of Iron golems battling over them.

I've always thought of the Xorn as food tourists. The rubies from the Prime Material taste different from those back home.

I'd use the Xig-zag/Xim-zum combo with the Mutant Future radiation rules. The antimatter version would mutate undead only.

It's probably poor form to toot my own blog and homebrew fantasy setting, but in my world of Pellatarrum, the Xag-ya and Xeg-Yi are alien, inscrutable "angels" and "demons" of the setting, as there are no gods and the people worship the Energy Planes themselves.

It's exceptionally wacky. If you decide to give it a chance, I hope you enjoy it.

Isn't the green lizard-man that Captain Kirk fights for some reason in some episode of classic Star Trek called a Xorn? I'm not a huge classic-Trek nerd, but I seem to remember it was.

On checking, no. They're called Gorn. I was close, anyway. Ah well.

There was a character called Xorn in Grant Morrison's run on X-Men, but that all ended in a mess of editorial interference, so we'll say no more about it.

I think Jeff Rients is on to something about the Xorns. Maybe worked gems and gold and stuff just tastes better than raw from the ground. So like a faceted gem is like getting food prepared by one of the people from Top Chef: Masters while just digging up your own is like just pulling stuff and eating it from the garden direct...

I like to think that Xorns raid the prime material for these things out of jealous rage, as if precious metals don't belong outside of the plane of earth.

Kind of like africans who protest blood diamonds, except they're unintelligent earth-monsters with mouths for heads.

Actually Xorn are of average intelligence.