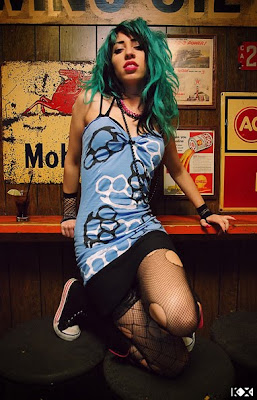 So I was in NYC for half a second, and saw my east coast people--and I ran a one-shot.

Despite some overlap, the games I play when I go to New York are a different crew--mostly guys (Mandy was there, and Vivid Vivka--over on the right, played her first game--Justine was gonna be there but was too jetlagged to roll).

Anyway, the idea for the one-shot is that there's these giant turtles.

Their shells are taller than a cathedral and carved--by lizardmen--into enormous opera houses.

This is because the lizardmen love opera--the idea is that back in prehistory the Slaadi (or Slaads?Frog-demons, whatever?) had a war with the lizardmen. This went on and on and was, y'know, terrible and stuff, until the lizardmages developed this ritual whereby they learned to bind the Slaads by trapping them in ritualized performances that never end--the great, eternal, Crawling Operas.

The lizardmen are proud of their opera, and their turtle/opera houses roam far and wide, performing for anyone with an open mind, a taste for the lively arts, and 2 gp.

Now the lizardman opera is different from the Italian opera--it's a much more interactive and nonlinear and postmodern art form. So the operahouse is less like a music hall than it is like a maze, and the lines (if any) between what's actually happening and what's part of the opera are hard for unsophisticated mammalian outsiders to discern, and, basically, the point is: the chances of having to fight a giant centipede in a stairwell or accidentally falling through a trap-door into a stage/chamber where a pair of toad-demons are hurling ritual recitativos at each other while a crowd of overdressed lizardfolk look on, applaud, and cry for blood are much greater during lizardopera than in the kind of opera we're familiar with here on Earth Prime.

(Another thing: due to the ritual nature of the Opera, it must go on at all times no matter what, or else the Slaads will escape and annihilate the Material Plane.)

So the set-up for the one-shot is:

-The PCs start out all riding toward an opera.

-It turns out The Lizard King is visiting this particular opera.

-I secretly give each PC a little slip of paper telling them why s/he is visiting The Crawling Opera (ranging from to "Your assignment is to sign a treaty with the Lizard King" to "You love opera.") (Normally I wouldn't give PCs assignments like that, but hey, it's a one-shot. Everybody was ok with what they got, so I figured no foul.)

So, anyway, they're in there and things are going ok. Fun is being had. The party confronts demons with the bodies of scantily-clad and pulchritudinous women and faces like giant leeches. The paladin falls in love with one and weeps silently in the corner while someone else chops her in half.

Then the PCs schmooze their way into the chambers of the Lizard King. The charisma rolls don't go down so well. The paladin decides the way to get the Lizard King on his side is to act really excited about the opera. Turns out the opera can end any number of ways:

"I have always yearned to see the ending with the Triumph of the Manbeast! Though I am told that ending often destroys the opera house and kills most of the spectators." Says the Lizard King (in a James Mason voice.)

"Oh, and how does that happen?"

"Well," says the Lizard King, his eyes lighting up and his scaled fingers twining and untwining in unseemly excitement, "in most iterations of the Opera, The Coming of the Manbeast is stymied by the machinations of The Hideous Pudding, or else is neutralized by The Bllllindheim." 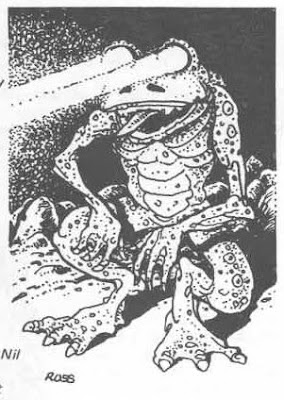 The players, for some reason, find this synopsis humorous.

"It's a toad demon so ugly that anyone who sees it goes blind."

This intelligence, too, is perceived as humorous.

"OMG THIS OPERA IS COMPLETELY FUCKED!!!!"

"Would..wuh...do you want to see a picture of The Blindheim?"

"You made a fucking picture?"

After a cruel episode wherein we try to see how long McCormick can laugh continuously without dying by reminding him, while he's busy laughing about The Blindheim, about other things that make him laugh, like that part in Naked Gun when Leslie Nielson shreds a note and then eats it like spaghetti, with sauce, the party continues to tour The Opera in the company of the Lizard King. 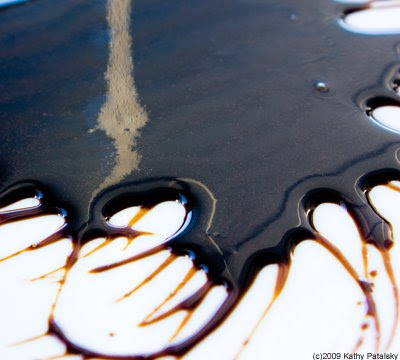 to check for traps, the PCs ended up gazing down onto the Hideous Pudding.

Vivid (whose secret piece of paper told her to slay the Lizard King) shoves the Lizard King into the Pudding. The lizard bodyguards attack and spectators, witnessing this brazen assassination attempt, stampede the party. McCormick (perhaps exhausted from wrestling with the complex subtleties of the Opera) dove into The Pudding to rescue the King.

Me: "Your armor is dissolving."

Steve: "Why didn't you just throw him a rope?"

McCormick: "Why don't you throw me a rope?"

Me: "The lizardman bites your ear."

McCormick: "Is it dissolving my flesh?"

Matt: "I'm going to shoot the Lizard King with a poisoned arrow."

McCormick: "If you miss you'll hit me!"

Matt: "I have to kill the Lizard King!"

McCormick: "I have to save the Lizard King!"

Me: (roll roll) "One of the lizardmen just pushed you in, too, Matt."

McCormick: "I have decided that Vorn has forsaken me and now I'm going to try to drown Matt in the pudding."

Me: "Shillaleagh? Ok, your staff turns into an Irish stick that's magical."

Justine's still playing? (not this time, I know, but still...)
She seems enthusiastic in the videos. It's nice to see you got her hooked.

Pulchritudinous. Such a beautiful word.
The idea of the Crawling Opera is very interesting. Kind of reminds me of Moorcock's crazy worlds.

Oh man I really really like Shillaleagh. In 3e I played a Conan-y pastiche-ish Wild Elf druid/barbarian from the Toucan Tribe. Copper skin, oxidized copper green highlights, including his mo-hawk. You'd've liked him. Any how it was just an exercise in raging with a shillaleagh-- it turns out, that is GREAT.

"The players, for some reason, find this synopsis humorous."

anyway, giving out secret assignments to players is a great idea to spice up a game sometimes. anyone who has ever played paranoia will probably agree.

this works best when playing one-shots, i think. in campaigns it is a bit harder to implement properly, but sometimes players make up their own little missions in their backstories that you can work with as gm.

The war of the lizardmen, the eternal crawling opera, the way war turned into art, the interactive game within-a-game aspect, all of it, it's all brilliant.

I had to look up pulchritudinous. If I were to make a guess I was going to say it meant 'covered in boils'. Very different actual meaning but I bet I could have pulled it off in Balderdash.

Back in the day, my players decided that the proper way to cast Shillaleagh was to yell the name of the spell very loudly. It became their battle cry. Apparently my party wasn't the only ones who did that.

Someday I want to play in one of your games. It is like you have MC Escher trapped in your brain just creating fucked up worlds.

Glad to hear you made it to my neck of the woods once again and that you had fun.

The overall concept of the opera house turtles is awesome and I am especially impressed by the incredible visuals (Vivka among them). Its like some acid trip Discworld adventure. Kudos!

Remember if you're ever in town and have an extra moment or need an extra player you know where to find me.

It's like Michael Moorcock meets Douglas Adams, especially with the opera aficionado/Lizard King. That world sounds incredibly awesome and I have to tip my hat to you.

Sigh. If you ever make it to Houston ... uh, would you let me know? 'Specially if you have time to run something.