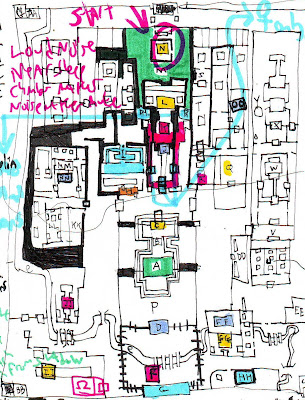 This is a sketch of the goblin palace the girls are exploring in the filmed campaign--a working palace dungeon (with shades of "Greater Crazy Wizard" dungeon) . It's pretty closely based on an actual historical palace--in order to make sure the rooms have whatever chamber-to-chamber logic one might reasonably expect. Most of these things are in there somewhere. Rooms in the goblin palace generally appear where their analogues are in the real-life model--I believe, for instance, that the fungus room appears where a formal garden in the real palace is.

Gold star for you if you can guess what building I ripped off.

Email ThisBlogThis!Share to TwitterShare to FacebookShare to Pinterest
Labels: campaign, design, DnD, I Hit It With My Axe, Vornheim Campaign

I spent more than a year studying archeology and memorizing plans of ancient palaces and temples, however I wouldn't guess this one even if my life depended on it. I guess it's better I changed to a different major.

Isn't that the one on Minos, with the attendant labyrinth...?

Only thing I can think of is The Temple in Jerusalem. But I am likely to be wrong.

The Forbidden City in Peking?

It's definitely not Habsburg, Hermitage, or Buckingham, so I'm going to guess Versailles.

Topkapi would have been cool, though.

Point to Chris. It's interesting that you consider the East less dungeony but prefer their palaces over Western ones, Zak.

@Chris of Nagoh got it.

I was looking for something that was more sophisticated and less fortressy than the typical western castle--i wanted the goblins to be surprisingly civilized--in their own weird way.

I checked out Versailles and Buckingham palace, but the floorplans were less interesting--and no harems.