The Battle of Styrofoam Cup Bridge 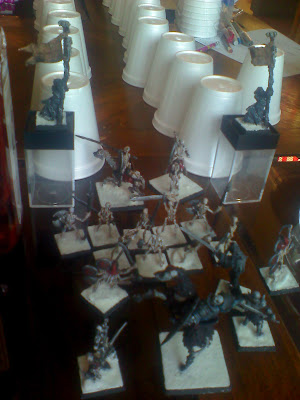 So we had this siege.

The strategy played out thiswise:

Before the party even showed up at the fortress, the undead army (mostly outside the fortress) had managed to take the northernmost tower. 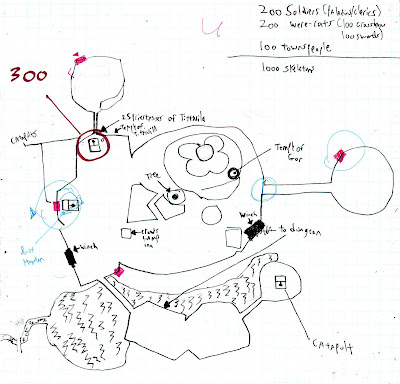 As you can see, the party took 300 of their 500 troops and placed them at the other end of the bridge connecting the rest of the fortress to the tower, joined those troops and began their attack there.

The girls had the remaining defenders (200) spread evenly out across the whole fortress. (Entrances to the fortress are picked out in pink. Those little mousetrappy things are catapults.)

So then the party started charging across the bridge, with their troops in tow.
___________
DMwise, the thing then is to figure: ok, assuming the party's doing this then what does the Death Knight or necromancer in charge on the other side do?

Obviously, the guys on the north tower defend themselves, and that's where most of the action the PCs could actually see takes place--the Battle of Styrofoam Cup Bridge. 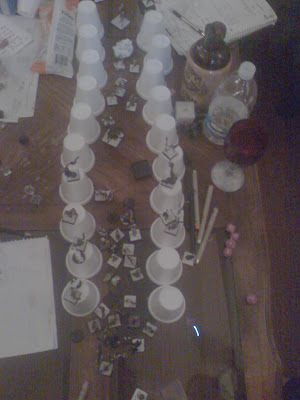 Meanwhile however, we got the other 900 undead outside the fortress. What'll they do?

They could just let the tower guys try to hold the tower, if they do, great, if they don't, they can just stay on the ground and keep starving the inhabitants, but if the PCs realize the undead army's not moving then they can bring all their troops to bear on the north tower and the skeletons will probably lose that position pretty fast and all for nothing.

So the skeletons attack some of the castle entrances in order to draw off some of the defenders.
They go for the west gate because if they break through, then they pincer the party and the rest of the bridge attackers, and for the east gate because it's waaaay on the other end of the city/fortress, so it's hard to transfer troops over there.

Now attacking a castle isn't easy, as everybody knows, but the skeletons do have overwhelming odds--at least in the beginning. So while the PCs and their troop square off 300 to 100 up north, there's 450 skeletons on the east gate and 450 on the west gate--each facing less than 100 defenders (it took a while for the party to decide to hustle everybody over to the gates).

The odds are still pretty decent for the defenders, but you have to take into account the fact that arrowfire isn't especially effective against skeletons and other bony undead. 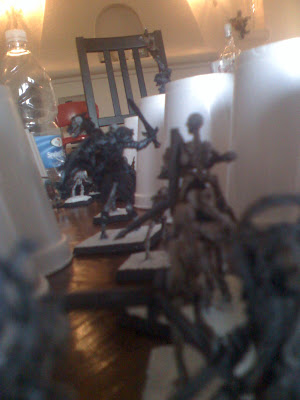 So anyway, up on the north bridge, the party is more-or-less kicking asses and taking names. Mandy and a helpful carrion crawler (long story) blocked up the middle of the bridge, Kimberly ordered the archers up onto the styrofoam cups so the skeletons couldn't sneak around and leap cup to cup, and Connie figured out that the floating tattery guy can only be hit by magic weapons.

On the other fronts, though, I'm rolling dice and the skeletons are making steady progress at the gates. They rolled surprisingly well.

After a few rounds, the invaders were charging into the east tower, (there was fighting in the stairwells) so the girls decided to pull all their east side forces back to the base of the bridge (there's a blue circle there) so the skeletons would be out in the open and they could shoot at them with the catapult. (Not sure how the people who live in the city felt about that move, but oh well, that's what happens when you put PCs in charge. Goddamn drifters, no respect for property rights.)

Here are some casualty markers Reaper sent us: 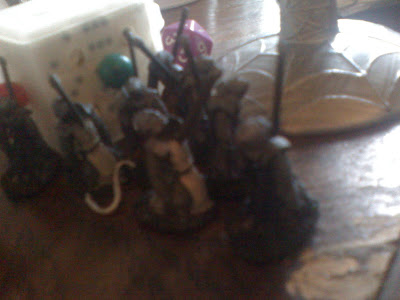 So the thing is--all goes well for our heroes as far as what's in front of them--but things are looking distinctly gruesome everywhere else.

Time is a big issue in this kind of fight--a combat round is 6 seconds in-game. But the idea of the PCs getting updates from the other fronts every 6 seconds is preposterous. (And they can't see the others very well.) On the other hand, a combat round is about a half-hour real-time of moving and deciding and rolling (twice that when Frankie is playing) so if you limit the arriving update couriers to, say, one a game-minute, that's still basically one update per session (I limit full-on rolling on the battle of styrofoam cup bridge to the party and anyone immediately ordered by them--mostly only folks who can fit on the bridge, so it's only about 10-12 pairs of enemies per round.)

At that rate the strategy element in the rest of the fortress is so slow that it's invisible to the PCs., which means it's barely part of the game. I split the difference on the side of "easy" vs. realism at one update every 4 rounds. 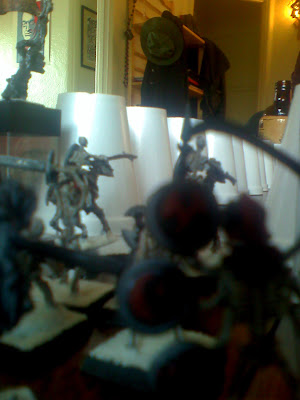 Nobody knows exactly what that boss skeleton in the armor on the horse is up to. He's been hanging back. Find out soon though, I figure. 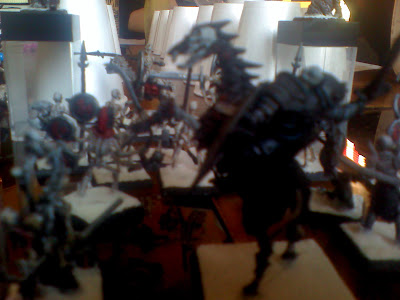 Couldn't the wererats and their immunity/resistance to non-silver/magic mow down the skeletons with impunity?

Do the Catapults throw grapeshot (for an area effect) or single large stones?
And does the town not have (or have trained) any slingers? Making a sling is trivial is you've got fabric and leather (or just fabric in a pinch) and there's no way the town has run out of rocks...is there?

@Tom: I believe slings generally have considerably shorter range than most other ranged weapons (except thrown ones such as spears and knives, of course), so they're of limited value in a siege. Also, a sling is a little harder to wield, if you don't already know how, than a bow or crossbow (accuracy is another matter, of course, but that's not a big part of siege defense, either--one does not aim at individual targets in that situation, but at the massed enemy below--at least until they break through the defenses, and then its mostly melee), albeit much easier to make and supply ammo. So for random townsfolk trying to defend their home, not such a good option, I shouldn't think.

@ Taellosse: In 1st ed D&D a sling (Bullet) Has a max range of 200 yards, just slightly less than the Composite Longbow's 210 yards and the Heavy Crosbow's 240 yards. While a simple stone loses 20% of that it's still competitive with a Shortbow and Light Crossbow. The sling is actually a much underrated weapon in 1e, a specialist could do worse than to select a sling.

In 3e, admittedly the range drops to less than half that of a good bow/crossbow and the damage is no longer as high (particularly with stones), but it's still the only device-hurled blunt weapon. While slingers haven't been a big part of any historical sieges, AFAIK, neither have skeletons ;)

The training time for mass fire at mass formations is actually fairly quick (from 1-2 days based on internet sources) though this is far from accuracy that a crossbow can deliver with around the same training time. Scaring birds away from your garden is a far sight from hunting them for the pot.

On an unrelated note Kudos to KK even if the success does screw up/slow down the (Non-televised) campaign. Forth the Gamer Geek brigade!

@Tom- Slings were indeed awesome weapons in skilled hands. Balearic slingers could lob stones 400 yards and these would kill.

@Zak- You mentioned your campaign is in permanent winter. The the minis look awesome with white bases. It works with the styrofoam cups too. Winter on your coffee table. Very nice siege. Excellent photography, too. Who did it? Good use of blur. Nice write up too. A lot of artists can't write. You can. Well done.

Yes! I've been wondering about this one. You weren't kidding when you said that it was a delayed game.

It looks like it was fun, and I hope that you can game more (I'm gaming vicariously these days.).

Awesome! Mass combat makes for a wonderful change from straight dungeoncrawling, and the girls will learn their tactics and strategy the hard way - the good way. It doesn't matter what the mass combat system is, as long as it's consistent, and then its wicked fun.

I like both, but every time I see Mandy, KK, or Satine I will think of their skills with the dice, and appreciate their performances with that in mind.

Christ on the cross, KK wanted to tie her axe to her rope so she could kill at a better radius. This sort of forward thinking is awesome!

Some of the best games I can ever recall from college involved sieges. We'd plan that shit out for DAYS. Seriously.

It didn't help that our gaming room was in a classroom at the student union at Purdue. We had our own chalkboard for putting up maps. It's amazing!