My Relationship With The Z Monster Is Complex

If your name starts with "Z", you quickly learn in school what an unlikely and unpopular letter it is. Do all children identify with the first letter of their first names? Do Davids feel for "D"s and Steves feel for "S"s? It was obscurely depressing to learn, when I was 8 or whatever, in The Phantom Tollbooth, that the reason nobody used "Z" was it didn't taste very good.

There's only one "Z" monster--and, like the name "Zak", zombies became popular in the last decade. They are, in many ways, a symbol of that decade, and, like all popular monsters, a symbol of what people at that time feared in other people. So I wrote about them when discussing the Zeroes in my last book:

In movies, zombies were the most popular monster. They are unusual, among monsters, for being inferior to their victims and winning only by weight of numbers, and for having no brains, but wanting to eat them.

Night of the Living Dead is a really good movie, so is that one where they're in a shopping mall but man oh man am I sick of zombies. I think I'll be ready to hear about them sometime around 2020.
_____ 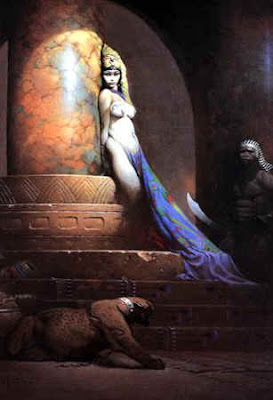 In hopefully unrelated news, Frank Frazetta died today. Considering the recent weirdness with his family and his illness and his possibly going and fucking up his old paintings, this may not be the worst news (he hasn't been all there, apparently, for years) but it is a good time to remember that he was very very good, and did things with lush color and movement that no other artist ever had before, in any genre or at any time, and that it was worth having all those dead-eyed, sallow skinned, constipated, overrated Italian Renaissance painters and fiddly, brown-obsessed 19th century Orientalists if it meant that one day the bloodline would result in Frazetta. He was the Muad'Dib of the main Western line of painting and, along with Vermeer and Velasquez, is one of the few things that justifies its existence.

"In hopefully unrelated news,..." you shouldn't make me laugh about such a sad subject....Okay, you should....

And by the way, I have thoroughly enjoyed your A-Z monster manual run. I found myself often looking forward to it.

that really was a very good goodbye. I also wanted to wave a fond farewell to the A-Z thing, i enjoyed it very much

Well spoken about Frazetta, he helped define the look of modern fantasy in many ways.

And so agreed about zombies. Can we move on to something new like werewolves or mummies or anything other than zombies?

(Thank goodness you included Vermeer and Velázquez in there.)

I agree with what you say about zombies, but I do want to ask: are there not zombie-ogres and zombie-dragons and zombie-owlbears?

"He was the Muad'Dib of the main Western line of painting..."

Best of all the tributes I've read so far.

And as a kid I was obsessed with dragons (and dinosaurs, for that matter), but who wasn't? I was also obsessed centaurs and Vikings, so I think your "first letter of the name=some kind of mystic connection to monsters sharing said letter" thesis falls a bit flat. Further tests may be required.

Zombies are such a sad casualty of the rise of fanboy culture in the last few years.

I never felt I had much in common with Ankhegs, Apes (carnivorous), Ants (giant), Aarakocrae, Achaierai, or even Aboleths.

On the other hand I do love me some Velasquez.

I'm a little sad to see the end of Monster Alphabet. Thanks for writing it - very interesting and entertaining.

And that really sucks about Mr. Frazetta (although it may actually be a good thing, like you said). I'm just surprised I haven't heard about it elsewhere - this is the first mention I've come across.

Why do you type "Velasquez"? His name was "Velázquez". I understand about the diacritic, since you probably cannot type it, but the "z"...

Specially funny considering we are talking about "z" monsters.

And to stop my trolling, I agree with the previous comments: An amazing epitaph.

Is it odd that my eyes are drawn to the reflection on the pillar, rather than to the Frazetta babe, in the painting above? I've long maintained that Frank and W.H.Turner will find something to talk about when they meet in artist Valhalla.

Will you be collecting this series as a pdf Zak? (whispers) Possibly with artwork?

Hi !
I've just read trought the entire blog and listen to the entire show and i liked it. It recalled when i played AD&D 15 years ago (when i was 15) and it's so refreshing, you seem to be a great DM so go for it, you make it fun and entertaining, so it's a good game (in my opinion).

@Chris--
why would I collect it as a pdf? it's all right here in HTML already. Why would i transfer it to a worse and slower format that's harder to use. cut and paste.