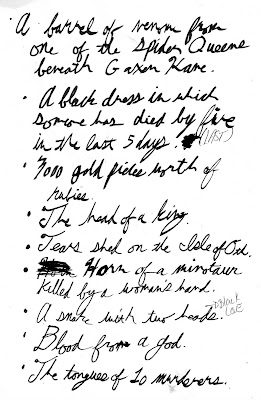 So in a Quest campaign, the PCs need to do some thing like get the ring to Mount Doom or assassinate Colonel Kurtz and then they're done. The DM has to place The Ring, Mount Doom and/or Colonel Kurtz and then assemble obstacles to getting this done. The advantage to this kind of campaign is the PCs always know what they're after and feel a sense of excitement as the goal approaches.

By contrast, in the Sandbox campaign, the DM designs the world in as much detail as s/he feels is necessary, then lets the PCs loose in it to do whatever they want. The obvious advantage here is the freedom the PCs have.


People who like fun (and I sincerely hope this includes all of you) are likely to be interested in finding ways to combine the urgency and drama of a quest with the creative openness of a sandbox.

In one hybrid, the Epic Sandbox, the DM places several quest-worthy objectives in various places on the map and then tells the PCs more-or-less about all of them simultaneously and lets them decide what order to tackle them in.

In the upper left there is a list of ingredients (found on the body of a nun that my players' characters had, of course, just killed) for a ritual spell that will supposedly prevent a plague of undead from consuming the gameworld.

Since my group is very into self-preservation, when they saw this they took notice.

Now the "Tears shed on the Isle of Oth" and the barrel of Spider Queen venom are both the kind of thing you might find in the Epic Sandbox--specific objectives in specific places.

The other items on the list, however, give the PCs a lot more freedom. Every PC worth her salt knows there's more than one way to get 3000 GP worth of rubies. And the head of a king? So many kings to choose from...

So this, hopefully will keep things interesting for a while. I just need to populate the gameworld with enough gods, kings, minotaurs, murderers, and black dresses that the players can really scheme the hell out of it.

Just warming up to start a new campaign, and trying to work out how to motivate players etc.

This will do nicely - yoinked!

The spell is nice, but what other MacGuffiny reasons are there? Ingredients, parts for a Colossus, uh...

If handled a bit differently than outlined in the published adventures, the Doomstones Campaign can be done in a similar vein.

i just jacked your idea

Interesting, but not really new to me.
Thanks for sharing, though!
=D