Thought Eater 1st Round Winners & Rules for The 2nd Round

So all the essays for the first round of the Thought Eater Tournament are in and the votes are counted.

We can now go on to the second round, where there's a pretty good chance all the writing will be pretty juicy. 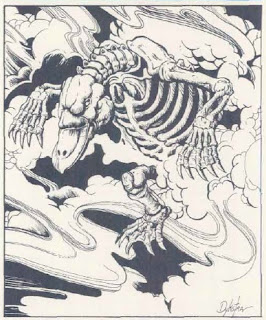 The winners are listed at the end of the post. Both winners and losers may feel free to reveal their identities and authorness in the comments if they like along with their blog addresses if they have them and anything else about themselves. You can also publish your first round submission on your own blog or wherever now.

Winners will go on to the second round, which I'm going to do a slightly different way. The second round is called "Say something original about". The key word is 'original'. Nobody else can have ever made, to your knowledge, whatever point you're going to make. It can be as mundane as "I first read Lovecraft while holding a Pink Panther plushie and so I associate Inspector LeGrasse with that"  but it must be something that has not been said before. After you're 100% sure nailed original down, then make it interesting.

First round winners, you must pick a second-round topic from this list of dead and battered horses:

Your second round thoughts are due a little over one week from now, Sunday October 25th.

Here are the first round winners, in the order they were published:

Things that don't work for you: Second one

How relationships to characters change: First one

Rehabilitating an ignored or derided rule: First one

Why people choose games: First one

People and their relationships to their PCs: First one

Players making stuff up: Second one

Abilities that allow you to skip parts of the game: First one

Brevity: First one (by a nose)

The essay on Emulation beat the one on Super-Intelligent monsters

The one about Time Management in Chunks got a "Yes" vote to go on the second round.
-
-
-

I lost the first match with the subject of religion. I have got a blog: http://ropeblogi.wordpress.com/

I wrote the Memorable Encounters essay in the tied round near the end. You can read my (more or less) weekly blog at www.deathcookie.com and buy games I've written/published (including the Ennie Award-winning Hobomancer) at www.hexgames.com (as well as Drivethru, IPR, and Paizo).

I was the second writer for "realism". my blog is www.3toadstools.blogspot.ca I mostly post about old school rpgs, and random table thingy's, I also draw maps once in awhile. I really enjoyed the idea and execution of this contest, thank you Zak.

(Writer #2 for "evil") Zak, is there any way to publish with formatting for this second round? I felt like my essay lost a lot in the translation from pdf to blog post in the first round.

I would like to congratulate my direct competitor with his/her winning piece on "group dynamics".
And although I lost in the first round of the contest I enjoyed writing my part (the first one).
Thanks Zak for organising this contest.
Not too long ago I also decided to start a blog: heavilyunencumbered.blogspot.nl

I'm the author of the winning essay on Common People. My blog, of course, isn't about people at all. I'm developing an OSR-style game of animal fantasy over at http://greatandsmallrpg.blogspot.com/

Thanks to Zak for hosting this contest. I greatly enjoyed writing for it, and I am humbled to have won the first round in my category.

I was the writer for the winning entry on Realism. I don't have a blog, but I might start one after this. It has been a blast, and having a deadline and contest to structure things around is a good motivator to make me work on art.

Hi. I'm the Infinity Round winner. Published the Infinity essay on a new blog: http://gallantstride.blogspot.com/.